Why do cargo aircraft still have floors?

Even with dedicated cargo aircraft built as cargo aircraft (rather than converted from a passenger-carrying configuration), the cabin is virtually always still divided into an upper and a lower lobe (which would, on a passenger aircraft, be the passenger cabin and the cargo hold, respectively) by a floor located a third to a half of the way from the bottom of the fuselage, drastically reducing the maximum size of the cargo that can be carried and making it much harder to transport round outsize cargo (such as, for instance, large high-bypass turbofan engines as are used on essentially all modern jetliners) by air. Given that the essential structural members of a large modern jet are

it should be possible to remove the floor, and thus dramatically increase the freighter's ability to carry very large objects, without significantly compromising the fuselage's structural integrity (the middle of the cabin would still be partially occluded at the bottom - or the top, or the middle, depending - by the center portion of the wingbox, but there would, nevertheless, be a considerable increase in the outsize-cargo capacity ahead of and behind the wings). Why isn't this done? Is the floor left in to facilitate possible future conversion to a passenger aircraft?

Because the overwhelming amount of cargo is fairly small and floors allow easy loading of both decks at the same time which is more important than the ability to load big cargo on occasion. By having floors you can load standard cargo containers quickly and efficiently. It also gives you the ability to standardize the containers with a reasonable degree of reuse most importantly they can fit into the lower deck of a passenger aircraft with out modification. Passenger airlines make a lot of money moving commercial cargo.

When it comes to flying around big, cumbersome cargo there are simply aircraft designed and built for such a task like the Airbus Beluga 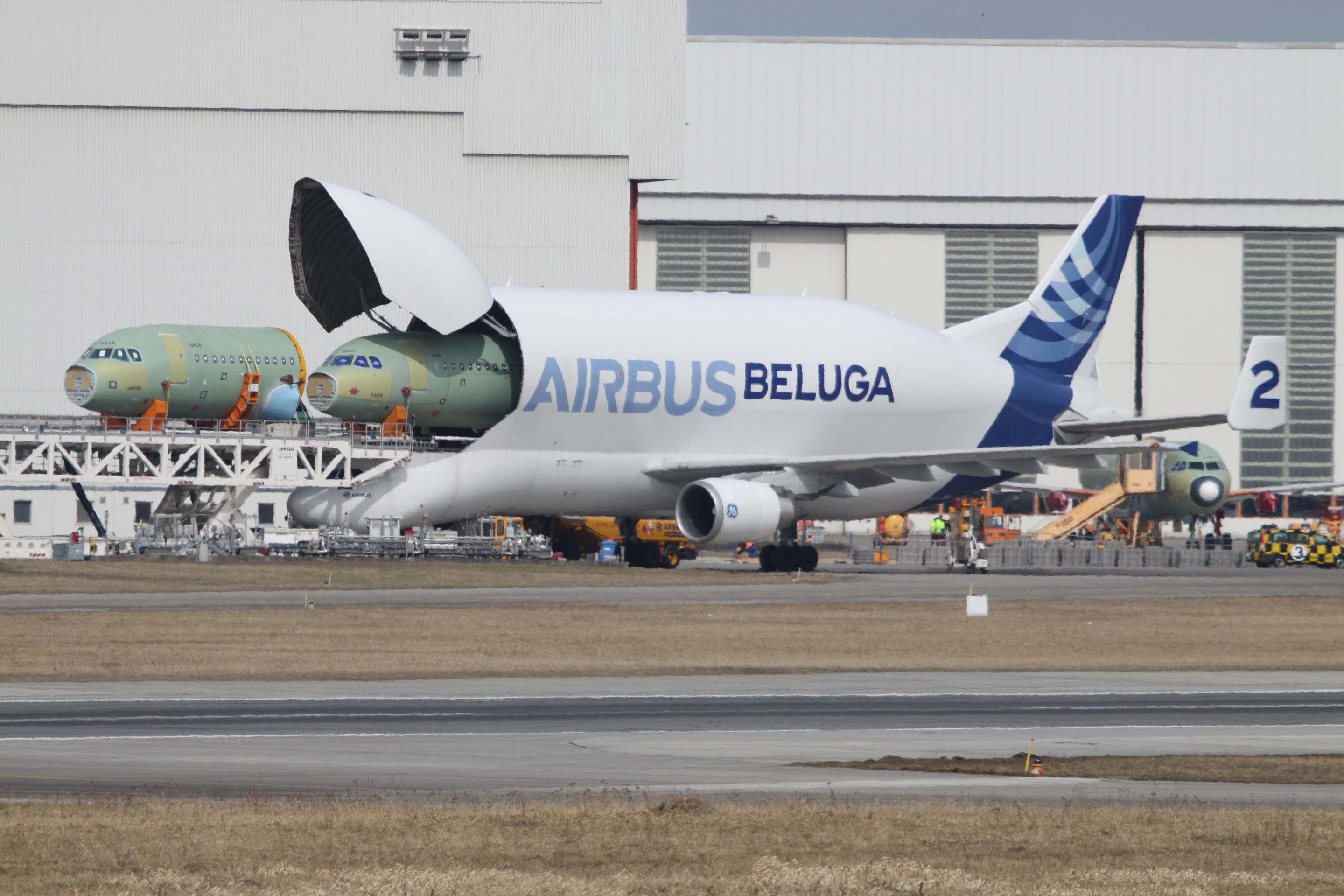 Because most cargo aircraft are derived from passenger aircraft. All dedicated cargo designs have no extra floor: They carry the payload on the fuselage bottom structure.

Comparison of transport aircraft cross sections aft of wing drawn to the same scale (picture source). The C-5 and C-17 are dedicated military cargo designs and their round bottom is not only for aerodynamics, but also to fair the structure needed for carrying the cargo floor bending moments. The Boeing 747-400 is a passenger aircraft which is also used as a cargo aircraft.

Even many aircraft which seem to be specially designed for cargo duties have in fact a passenger-carrying origin, and applying more than structurally superficial changes would cost too much for the limited number of aircraft needed. Most freighters started their life as passenger aircraft and only small changes are efficient; redesigning the fuselage is completely uneconomical.

On most transport aircraft the floor structure, especially the beams along the sides, is a key part of the fuselage as a load bearing pipe whos lower half is under compression and benefits from the stiffening. Also the space under the floors is full of components, avionics, ducting yadda yadda. Ya gotta put it somewhere. Lots of airliners have underfloor cargo holds though.

The passenger aspect is also a factor. You could design a cargo only airplane with only a very skinny floor section as low as possible that would take specialized circular containers, but then that's all it could do.

Employees walking through aren't always the most cautious. From experience working at a cargo airline, it is very easy to misstep and fall through and land on something expensive when the floors are up for maintenance.

Not the answer you're looking for? Browse other questions tagged aircraft-design aircraft-structures cargo or ask your own question.

80
Why do aircraft models end their life as freighters?
15
How are off-wing jet engines transported?
11
How many active large commercial airplanes are there?
4
Do windows on the side of the fuselage increase drag?

4
What would it take to pressurize a cabin with surface pressure?
8
Is there anything wrong with this more symmetric aircraft design, and why isn't it used?
6
How does the fuselage handle the different loads?
29
Why do most airliners have underwing engines, while business jets have rear-mounted engines?
8
Why does the A330 sit nose-down on the ground?
24
Why do cargo airlines frequently choose passenger aircraft rather than aircraft designed specifically for cargo?
7
Stress on wing/fuselage-joint of aerial water tanker aircraft - and possible mitigating measures
19
What is the upper deck on converted freighter long-hump 747s used for?
2
How can I modify a fuselage to increase the payload?