Do pilots get more fresh air than passengers? [duplicate]

There is a famous air travel myth claiming that "pilots get more fresh air than passengers".

I would like experts to either dispel or confirm this myth, that pilots receive "better air" with higher oxygen levels than passengers, who have to breathe more recirculated air.

Although at first glance it might sound absurd, but when you think about it, it would actually make sense, because:

press release
Previous research led by Allen and colleagues found that, in office buildings, CO2 concentrations between 1000-2500 ppm – levels once thought to be benign – negatively impact the cognitive function of employees. For the new study, they wanted to determine if higher CO2 levels on the flight deck would impair a pilot’s ability to perform advanced maneuvers and manage emergency situations, such as a single-engine failure during takeoff. […] Average CO2 levels on the flight deck are less than 800 ppm. However, they have been measured as high as 2000 ppm on the flight deck and even higher in the cabin during the boarding process. […] The National Research Council has suggested that current standards for ventilation rates on flight decks may be inadequate.

background
On the flight deck […] the average CO2 concentrations are typically <1000 ppm, but the 95th percentile concentration can be as high as 1400 ppm, depending on airplane type.

In light of the above it would make sense to prioritize pilots over passengers when it comes to circulation of fresh air.

I will post the results of my research into this question as an answer below, but would welcome other answers presenting technical evidence and quoting citable references.

scope:
This is not the same question as Q57941.
Q57941 asks if there is airflow between cockpit and cabin (as opposed to be hermetically sealed).
Whereas this question asks if more fresh air from OUTSIDE flows into the cockpit than into the cabin. Also, it addresses a very famous airline myth, and as such it has a valuable purpose.

Taking the B737 as an example, fresh air from the left pack flows directly into the cockpit (green airflow in the diagram), whereas the passenger cabin is served from the mix manifold only (yellow). Therefore

In a cabin packed with hundreds of people each transforming 21% O2 and 0.04% CO2 into 16% O2 and 4% CO2 (i.e. breathing) and where 50% of this exhaled used air (red) is recirculated back into the cabin (yellow), O2 and CO2 levels are poorer than in the cockpit not supplied with exhaled used air. 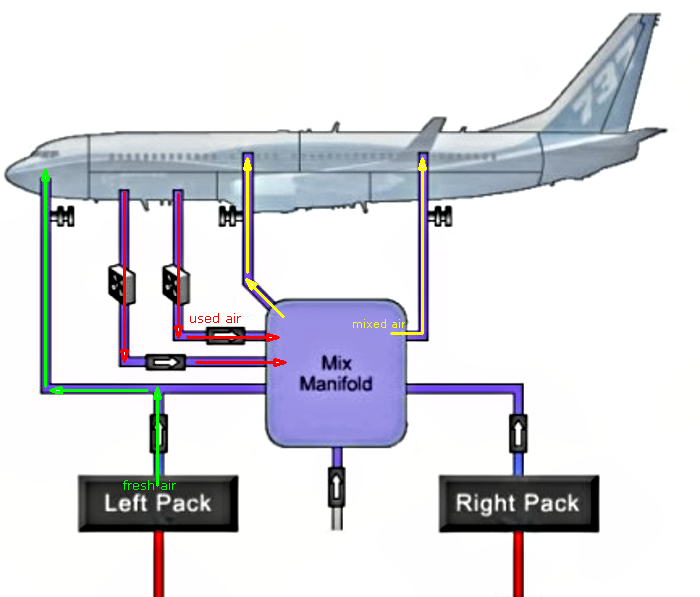 The AFA-CWA flight attendants association indicates how much fresh air each person receives:

I can confirm that similar air distribution systems also exist for:

This is, however, not the case for the following aircraft:

In the end it depends on the aircraft type. It seems on Boeing aircraft the flight deck air is indeed fresher than the cabin air because it receives no recirculated air (during normal operations).

However, it is not clear what "ten times more oxygen" is supposed to mean in the article. It certainly does not mean a ten times higher oxygen concentration (as already noted in the comments). A ten times higher flow rate would not impact the available oxygen partial pressure either.

3
Do pilots breathe the same air as passengers?
9
How much air is recirculated (vs. bleed air injected) in modern airliners cabin?

25
Could a pilot incapacitate other crew/passengers by manipulating cabin air quality/pressure?
10
How hot would pressurized air get if the air conditioning failed?
15
How do big planes like 737 manage fresh air for passengers during flight?
9
Can the RAM AIR valve cause depressurization on the CRJ-900?
10
Is the bleed air passengers breathe tapped from the engines before or after it comes in contact with fuel? And why? Isn't this unhealthy?
3
Do pilots breathe the same air as passengers?
1
HEPA filters, airliner HVAC and COVID 19