Do pilots breathe the same air as passengers?

Do pilots breath the same air as passengers (shared air) ?
(i.e. the air a passenger exhales will be inhaled by the pilot [or vice verca], which also means that smoke in the cabin will inevitably end up in the cockpit) 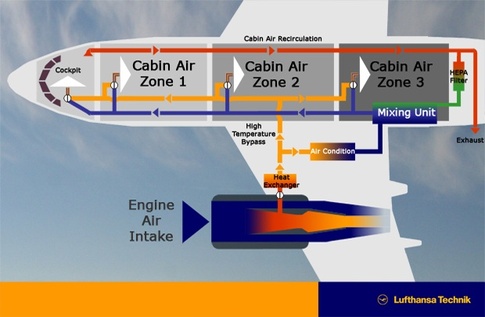 As your image already shows, the same air is distributed throughout the cabin and the flight deck. For example, in the 737 NG FCOMv2 2.30.4 (Air Systems - Air Conditioning Description) it says:

Since the flight deck requires only a fraction of the air supply provided by the left pack, most of the left pack air output is mixed with the right pack supply and routed to the passenger cabin.

So on the 737, the left pack supplies air to the flight deck and the cabin, the right pack only to the cabin (in normal operations).

Air from the cabin is also reused in the recirculation system:

The recirculation fan system reduces the air conditioning system pack load and the engine bleed air demand. Air from the passenger cabin and electrical equipment bay is drawn to the forward cargo bay where it is filtered and recirculated to the mix manifold. The fan is driven by an AC motor. The fan operates with the recirc fan switch in AUTO except with both packs on and one or both in HIGH.

This implies, air previously exhaled by a passenger could make its way into the flight deck, but it is filtered first. In case of smoke in the cabin, the recirculation system would be switched off. However, during normal operations, the left pack supplies the flight deck directly: 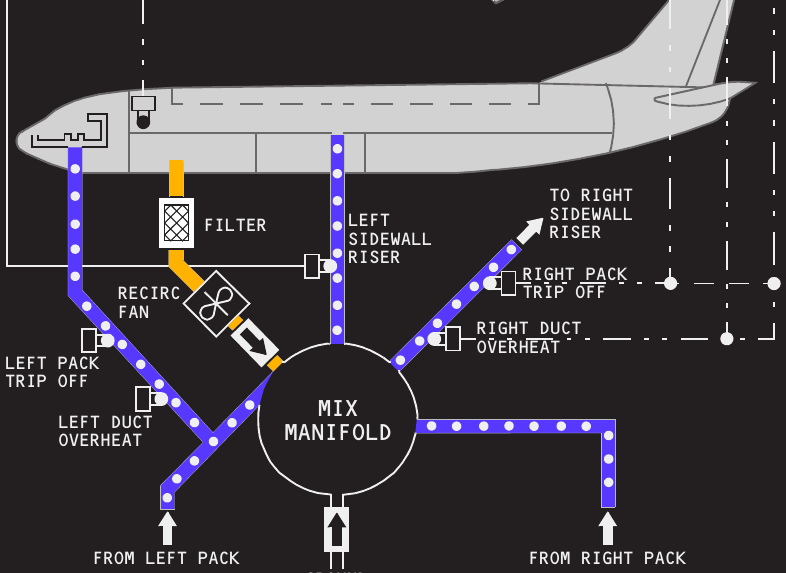 All air quality parameters you mentioned should be identical or very similar for the flight deck and the cabin, except for temperature. Most aircraft allow separate temperatures for different zones. E.g. the 737 again:

There are three zones: flight deck, forward cabin and aft cabin. Desired zone temperature is set by adjusting the individual Temperature Selectors. The selector range is approximately 65°F (18°C) to 85°F (30°C). The packs produce an air temperature that satisfies the zone which requires the

Temperature Selectors in the 737 overhead panel:

The details will of course depend on the exact aircraft model!

3
Do pilots get more fresh air than passengers?
9
How much air is recirculated (vs. bleed air injected) in modern airliners cabin?
7
How much humidity is being maintained in cabin and cockpit of B787?
4
Who controls the cabin air temperature?
4
How to measure the Aircraft cabin air quality?
2
Why isn't cabin air quality in airliners directly monitored with sensors?

13
Is if safe/legal for an aircraft to return to cruising altitude after passenger oxygen masks have been deployed?
1
Air quality monitoring devices for a320
10
Is the bleed air passengers breathe tapped from the engines before or after it comes in contact with fuel? And why? Isn't this unhealthy?
6
Is the air in aircraft cabin toxic?
3
Why is ram air not used for air conditioning in airplanes?
4
How often is the cabin air replaced in A320?
1
HEPA filters, airliner HVAC and COVID 19