Passenger aircraft have fuel tanks in the wings. Why?
What are the advantages and disadvantages of this location ?

examples of disadvantages I would suspect: 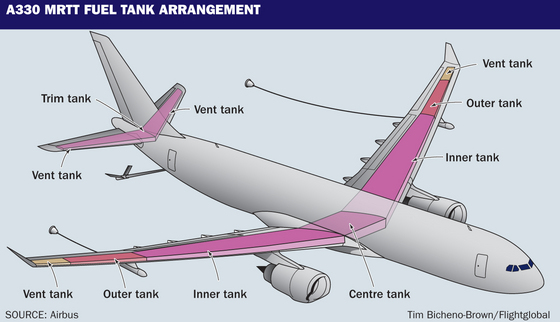 1) Fuel sloshing with in the tanks laterally as a result of turbulence, or uncoordinated flight, can lead to lateral weight shift and potential lateral instability. At low quantities of fuel, and in prolonged uncoordinated flight, there is a chance that the engine can suffer fuel starvation simply because the fuel has flowed out of the sumps in the tanks These problems can be alleviated with proper fuel tank baffling and the use of feeder hoppers fed by the main tanks which the engine drinks from.

2) On aircraft which utilize a siphon feed fuel system such as low wing aircraft, the fuel cannot be evenly siphoned from both tanks at once. This is a particular problem in single engine aircraft, where separate fuel systems are not dedicated to one engine in particular. In such cases the engine will feed off either the left wing tank with a right wing tank and this is controlled by means of a fuel selector valve in the cockpit. On aircraft that do not have automatic fuel management systems, engine fuel feed must be manually selected. Care must be taken to alternate feed from both tanks periodically to prevent a lateral imbalance and fuel quantity. Additionally this fuel tank switching schedule, if ignored long enough, can potentially lead to fuel starvation of the engine and a forced landing. This is particularly problematic in the low wing light single engine aircraft such as the Piper PA-28 or Cirrus SR-2X, especially if the pilot has recently transitioned into this airplane after flying high wing aircraft, which use gravity feed fuel systems, and allow the engine to feed from both tanks at once. Larger single engine aircraft like the TBM have automatic fuel tank switching systems to address this problem. Large multi engine jet aircraft have dedicated fuel management systems which address these problems.

I see what you're saying, but there's something you're overlooking in your logic. You're looking at an airplane sitting on the ground, where the wheels are near the fuselage and most of the wings are dead weight that creates strain on the structure.

Think about one in flight. Now all the lift is coming from the wings, imagine the airplane suspended by a couple dozen (billion) cables spread around the wing surfaces. Now the fuselage is dead weight and the strain in the structure is from carrying the fuselage.

So when you add weight to the wings evenly, it adds practically zero structural load for the wings. What's being lifted is inside the source of the lift. So from a structural load perspective, it's a wash: it doesn't matter.

Whereas if you add more tanks in the fuselage, that's fine on the ground, but it adds huge stresses to the wings in flight, effectively reducing practical cargo capacity.

The strain on wings from sitting on the ground is much less worrisome to designers than the strains in flight.

As opposed to higher risk of catastrophic damage to the cabin in the case of in-flight fuel ignition?

Assuming a non-explosive ignition having the fuel in the wings means you can take action to dump the fuel. If you have a fire begin in the main fuselage however you've got a higher chance of the fire incapacitating the crew before they can take steps. Or damage occuring to the avionics, the pressure cabin etc.

maybe higher risk of fire when lightning strikes a wing ?

And it's not just the wings, many aircraft carry fuel in the vertical stabiliser as well.

Along with the other answers, I'll point out most of the recent the cases where an aircraft fuel tank exploded, the center tank, which is in the fuselage, was implicated. There are two reasons:

First, a fuselage tank is located lower than the engines and requires pumps to raise the fuel. Electrical pump failures have caused explosions. This also means that a pump failure results in unusable fuel, whereas wing tanks can naturally feed the engines via gravity.

Second, fuselage tanks are closer to sources of heat. This was a cause of the TWA flight 800 accident, where heat from nearby air conditioning equipment lead to a flammable vapor in the fuel tanks. In contrast, wing tanks are naturally cooled by airflow and are less susceptible to forming such explosive vapors.

Only when the plane's on the ground. When it's in the air, it decreases the load on the wings because their lift balances the weight.

At the rate of one cycle per flight. And the wings already go through a stress cycle once per flight (flexed down when the plane's on the ground and up when it's in the air).

The fuel tanks catching fire in flight is catastrophic wherever you put them.

When did that last happen? Wikipedia's list of plane crashes suggests LANSA flight 508 in 1971. Such incidents are now even rarer, because fuel tanks are fitted with inerting systems. This was originally recommended after the crash of Pan Am flight 214 in 1963 but it took a long time for it to actually happen.

More weight on the wings is actually good as it makes the aircraft more balance and more resistant to unnecessary swerving during turbulence or wind current, like a person walking on tight rope carrying a horizontal rod(bar) for balancing. Check out radius of Gyration in mechanics.

There is no other reason. The engine is attached to the wing and They are trying to design a fuel tank to fuel the engine, There is no space on the torso. So they make a hole in the wings.

Because it is hard to fit the passengers or their baggage into the wings.

Not the answer you're looking for? Browse other questions tagged aircraft-design wing fuel-tanks aircraft-structures fuel-systems or ask your own question.

72
Why are fuel tanks in the wings filled first, and why are they used last?
26
What is the lifespan of commercial airframes (in general)?