During Lion Air Flight 610, a Boeing 737-MAX, it seems that the angle of attack sensors caused the software to believe the aircraft was stalling, thus initiating a nose-down pitch to recover from the (non-existent) stall.

I was under the impression that the difference between Airbus' fly-by-wire system and the Boeing types, is that Boeing aircraft can have their computer imposed inputs overridden (as discussed in my previous question).

So in the case of this flight, would pulling up have not recovered the flight, and if so, why not?

The new 737 MAX has a more advanced pitch control system called maneuvering characteristics augmentation system (MCAS), which automatically adjusts the stabilator trim in case of high thrust and high angle of attack (AOA). This makes it very hard to overcome the down force with elevator input alone (pulling up).

In case of a wrong trim adjustment (e.g. due to an erroneous AOA sensor), the pilots have to adjust the trim manually and maybe even turn off the stab trim via the cutout switches in the center pedestal (shown below). This was apparently not conveyed properly in the MAX differences training and the FAA has since issued an Emergency Airworthiness Directive. 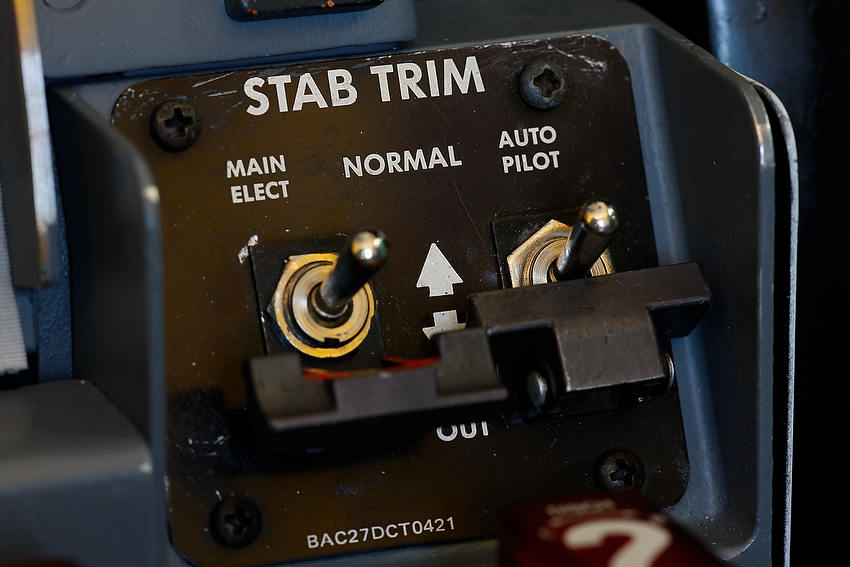 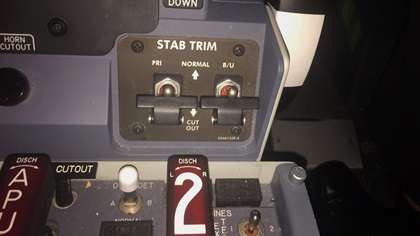 So compared to an Airbus, the Boeing pilots can still have all manual control, but they have to use manual pitch trim.

So in the case of this flight, would pulling up have not recovered the flight?

The stabilizer trim can easily be overridden as well (but not with the yoke). You can either:

The problem with the Lion Air flight is that they probably did not recognize that it was the trim they needed to override, so pulling back on the yoke was futile.

Mike's answer is right. The yoke controls the elevator not the stabilizer.

MCAS trims the stabilizer, which can be overriden through the thumb switch, trim cutout switches (disables MCAS and the thumb switch), or by manually turning the Trim Wheel. (To see what that looks like, refer to the end of this video.)

To expand on Mike's answer, the preliminary report for the Ethiopian Airlines flight has been published.

According to the report, after MCAS activated, the pilots first executed option 2 (hit the Stabilizer Trim Cutout switches). They then attempted to trim manually via the wheel (option 3), which was apparently unsuccessful - this can be due to the aerodynamic forces on the stabilizer making the wheel very hard to turn. At last, they reengaged electric trim, and trimmed in the Aircraft Nose Up (ANU) direction with the thumb switch (option 1).

According to the report, they were pulling on the yoke continuously to keep level flight during most of the recording.

The best is to refer to the following website: https://www.boeing.com/commercial/737max/737-max-software-updates.page

You may read the following in the introduction:

The Maneuvering Characteristics Augmentation System (MCAS) flight control law was designed and certified for the 737 MAX to enhance the pitch stability of the airplane – so that it feels and flies like other 737s. MCAS is designed to activate in manual flight, with the airplane’s flaps up, at an elevated Angle of Attack (AOA). Boeing has developed an MCAS software update to provide additional layers of protection if the AOA sensors provide erroneous data. The software was put through hundreds of hours of analysis, laboratory testing, verification in a simulator and two test flights, including an in-flight certification test with Federal Aviation Administration (FAA) representatives on board as observers.

To answer your question more precisely, please note pilots are trained to follow procedures. For every failure there is a corresponding checklist. In case of failures requiring urgent response, the pilots will perform the most important actions by memory and will then follow the checklist. On the 737 MAX it is a paper checklist and not an electronic checklist that is immediately displayed like on the Boeing 777.

Concerning the trim behavior related to MCAS, no clear checklist was available because the MCAS function was not available in the FCOM. Normally, in case of runaway stabilizer trim the pilot may instinctively move the column in the opposite direction of the runaway. The next action is to switch off the cutout switches in order to be able to crank the wheel manually, however if the aircraft speed is very high and the angular deflection of the trim is high it becomes very hard to crank the wheel.

Not the answer you're looking for? Browse other questions tagged boeing-737 emergency-procedures accident-investigation pitch mcas or ask your own question.

51
What is the technique or procedure to disable/disengage the MCAS on Boeing 737 Max 8 & 9 Aircraft?
34
Why can't the A320's computer-imposed limits be overridden?
5
How the stabilizer cutout switch functionality has changed from Boeing 737 NG to 737 MAX?

34
Why can't the A320's computer-imposed limits be overridden?
7
How to find black boxes underwater absent any pinger signals?
6
what type of sensors does the Boeing 737 MAX use for MCAS?
4
Why can't the 737 MAX's horizontal stabilizer autotrim be cut out by control yoke inputs?
5
How the stabilizer cutout switch functionality has changed from Boeing 737 NG to 737 MAX?
1
Was MCAS part of 737 8 MAX MMEL list?
2
How long is maximum time to investigate an airplane crash?
4
Will the 737 Max 10 have MCAS?