How can the F-15 and Su-27 achieve a high top speed without variable wing geometry?

I watched a documentary once that explained, I believe, how the Su-27 and similar aircraft such as the F-15, can achieve a high top speed without variable wing geometry.

How does this work? How do they achieve high performance without swept wings in the F-15, Su-27, and similar aircraft?

They simply have enough thrust to do so with their given wing. There is no rule that high speeds are associated with variable sweep wings or that you need such a wing to go fast. As a matter of fact many of the testbed super sonic aircraft as well as the really high speed stuff dont have swept wings.

Wing design can effect efficiency (which may or may not be a concern in fighters) and can limit top speeds but that simply means that for a fixed shape wing it must be optimized for a desired speed range.

Another signifficant factor is because the F-15 is an airforce aircraft. So, it doesn’t have to land on a carrier. Hence it can take plenty of runway length to land, which means it can touchdown at a higher speed. So, its wings can be permanently swept at relatively high angle, because there is no need to have heavy wing pivots that enable them to sweep forward and allow lower speed flight for carrier landings.

In comparison, the F-111 had a variable geometry wing so it could fly slower, when the wings were swept forward, because it was intended as a joint aircraft, and so there was going to be a Navy version, that had to be capable of landing (and takeing off!) on carriers.

The F-111 wing sweep is from 16 to 72.5 degrees. In comparison, the F-15 leading edge of 45 deg. The wing angle is asignificant factor that helps define the mach number at which the shock cone from the nose will impinge the wing tips. See below. 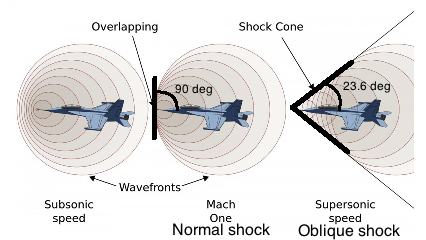 If the wing tips are outside the shock cone and in the sonic flow, the handling charteristics, as well as the increased drag, is likely to be very undesirable. The formula linking mach number and shock angle is given here by NASA.

All sweep does is make the air think the wing's chord to thickness ratio is higher, or you could say thinner in relation to its chord than it really is, for a given wing area. The benefit is mainly for wings with a fairly high aspect ratio, that is long with a narrow chord. Fooling the air into thinking the wing is "finer" than it really is delays shock wave formation to a higher speed than if the same wing, with the same chord and length, was straight.

Airplanes like the F-15 with a low aspect ratio, fairly thin wing don't really need a lot of sweep because their airfoils are already really thin relative to their chord.

The F104 is the most extreme example of this. Ultra low aspect ratio, thin biconvex supersonic airfoil, no sweep at all required because the benefit is negligible.

2
Could a variable sweep aircraft also use negative angle?
14
Did the contemporaries of the F-14 also have automatic swing wings?
17
Why does the U-2 Dragon Lady not have swept wings?
0
Spanwise flow and wingtip vortices in forward-swept wings
3
How is the change of moment handled in a Weight and Balance calculation with a swept wing aircraft?
3
Why do swept wings decrease the drag increase that occurs in transonic flows?
8
For aircraft with variable-sweep wings, how unstable is it to have each wing in a different position?
0
Could an arrow planform be better for a supersonic aircraft than a delta? Why?
2
Why do semitailless swept-winged aircraft, but not delta-winged aircraft, suffer from (primarily) pitch oscillations at high mach?
2
How does a variable-sweep-wing aircraft keep wing-mounted payloads straight?