Between a helicopter and an airplane, which requires more power to fly, for a given TOW?

For the given same mass (say it 400kgs), which one requires more power (in HP) between helicopter and airplane? Say that both are designed maximum (the required material are considered during design) to minimize the required power.

Edit: Question should be like this: Which one is requires more power to lift a helicopter (to make it hover) and to make a fixed wing airplane fly? Not to make them move at the same speed.

Airplanes fly by creating lift from their wings. This causes some drag, but good wings have lift/drag ratio's in the range 15-20. That means the lift-dependent drag is only 5% of the lift. Helicopters on the other hand generate lift directly from trust; there is no multiplier involved.

Of course, planes and helicopters both have additional drag from forwards airspeed, and for planes this is obviously unavoidable to prevent stalls.

Let's look at this in an extremely simplified fashion.

However, this assumes perfect efficiency. In reality, wings will experience drag even if no lift is being generated, and the same goes for the fuselage. You will often find a minimum of total power required at some speed such that the induced drag is quite small but the friction drag is not quite as large. This goes for both fixed and rotary wing aircraft. These factors are a result of the aircraft's practical design, not of theoretical considerations.

So, there is no theoretical answer to this question. There is only a practical answer, which is that hovering in a helicopter is very inefficient and requires a lot of power (because it can only affect a small mass of air since it is not allowed to move), so given the constraints in your question (a hovering helo vs a fixed wing at 100kts), the fixed wing is probably more efficient in practice.

If you mean for a 400kg helicopter and 400kg fixed wing airplane to move at 100kt, it's generally going to be the helicopter that requires more power since the whole egg beating thrashing mess is a lot less efficient at converting energy to forward speed.

Of course you can make the airplane draggy enough that it can require more power than the helicopter to go 100kt if you want, and there are plenty of those, but I assume we're talking about optimized craft here.

Helicopter rotors need to provide enough thrust to compensate the weight of the helicopter: $T_H = W$.

Fixed wing aeroplanes need to provide enough thrust to overcome drag, while the wing lift compensates for weight. As @MSalters correctly states, the wing provides much more lift than drag, plus there is a fuselage & tail as well. 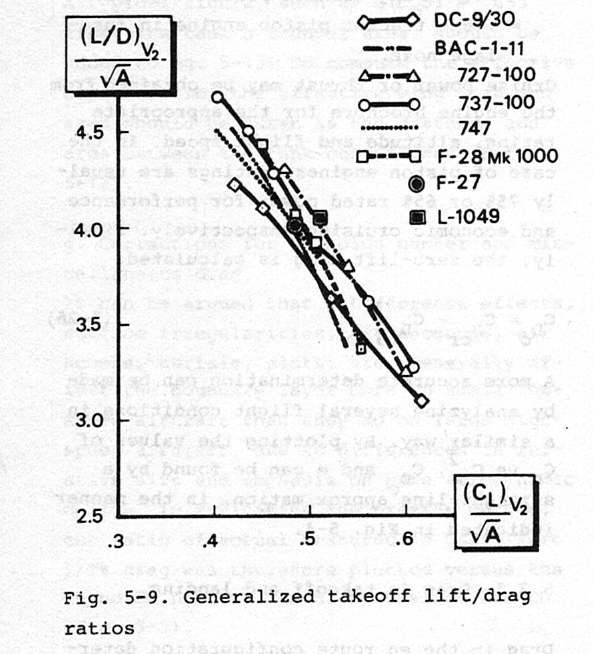 Torenbeek Synthesis of Subsonic Airplane Design gives some L/W ratios of complete aeroplanes, a medium size turboprop such as the F-27 is listed as having an L/D of 13.8 during takeoff, since aspect ratio A = 12. So this fixed wing aeroplane would have to provide 1/14 of the thrust of a helicopter of the same T/O weight: $T_F = W/14$

Tip speeds $(\Omega R)$ of propellers and helicopter rotors are comparable, disk area of a fixed wing is lower. So the required power at constant weight for a fixed wing is at least an order of magnitude lower than for a helicopter.

the helicopter's "wings" (its main rotor blades) are moving through the air at something like 400 MPH at their tips even while the helo itself is sitting in ground effect and not traveling through the air at all. This requires work, and to fly forward, the engine has to overcome the main rotor drag at the same time it has to overcome the fuselage drag. So: more drag for the helo, less for the Cessna 150.

General rule of thumb with heavier than air craft is the bigger, slower lifting surface with less interference is more EFFICIENT at converting available power into lifting and/or propelling force.

The helicopter blade has greater efficiency in creating thrust compared with a propeller (see V-22 Osprey), but the wing is far more efficient at creating lift, therefore the Cessna 150 requires less POWER to create the same amount of total FORCE (lift and thrust).

You will notice birds propel and lift more like helicopters. Yet they are MORE efficient than the Cessna because their PROPELLERS are proportionally larger and slower. But we do not see 400 kg birds or 800,000 lb Cessnas because NET thrust is what actually moves the aircraft.

A less EFFICIENT jet has much more power, so much more thrust is available, albeit with more fuel consumption per pound of thrust produced.

Finally, force required to "make the aircraft hover" and "make the air plane fly" really is comparable! One must simply realize in both cases it is FORCE vs DRAG. So, for direct comparison, they both need to be at flying speed.

This is an unfortunate corruption of James Watts original weight lifting work with horses (origin of "horsepower") and should read:

Notice distance has NOTHING to do with POWER! (I'm sure football players struggling at the line of scrimmage (Thrust vs Drag Superbowl) appreciate this).

Let's fast forward to the THRUST curve of an Estes C6-0 model rocket and viola! That is what James Watt's horse is doing!

So we can think in terms of thrust, lift, drag, and gravity as ADDITIVE forces (much easier), and better yet, break them down into vertical and horizontal components!

16
Why would maximum fly-time (endurance) not coincide with max L/D operating point?
8
Is there anything wrong with this more symmetric aircraft design, and why isn't it used?
92
Are wings any more efficient at creating lift, versus orienting the engine's thrust downwards?
6
What is the relation between drag and weight?
2
How to determine the thickness of an airfoil?
5
How to calculate the power required during transition from VTOL to fixed wing?
2
Which one is more effective produce power of this two turbine's location?