It's easy if we clarify your statement a bit.

When aerodynamicists say "moment by lift", this means the derivative of moment by lift. That is, the change of moment per change of lift, $\partial M/\partial L$, or shorthand $M_L$ (or their coefficients more commonly: $C_{M_{C_L}}$). Stability analysis (that's where the aerodynamic center is most useful) is all about derivatives rather than actual forces and moments: we are interested what changes when conditions change.

In this light, "moment by lift" will be zero, true, but "just moment" won't be.

First of all, I am going to comment on your statement

Then apparently moment by lift will be zero about CoG.

This is not apparent and not necessarily true, as your next comment also implies you know about.

If we change the angle of attack, the pressure distribution changes. Therefore, the aerodynamic force and the location of the center of pressure and the moment all change. If we had still fixed the wing at p, the size of the moment would most likely have changed by now.

We see that determining the aerodynamic behavior of an airfoil is very complicated if we use the center of pressure to analyze the forces because all variables (leverage, force and moment) change when we change the angle of attack.

You can think of the aerodynamic center as the point through which the part of lift, which is dependent on the angle of attack, acts.

A figure showing the constant aerodynamic center for angles of attack equal to 8, 4, 0 and -4 degrees. Notice the negative lift on the forward part of the wing at negative angles of attack compensating for the large leverage of the center of pressure (here denoted TC). 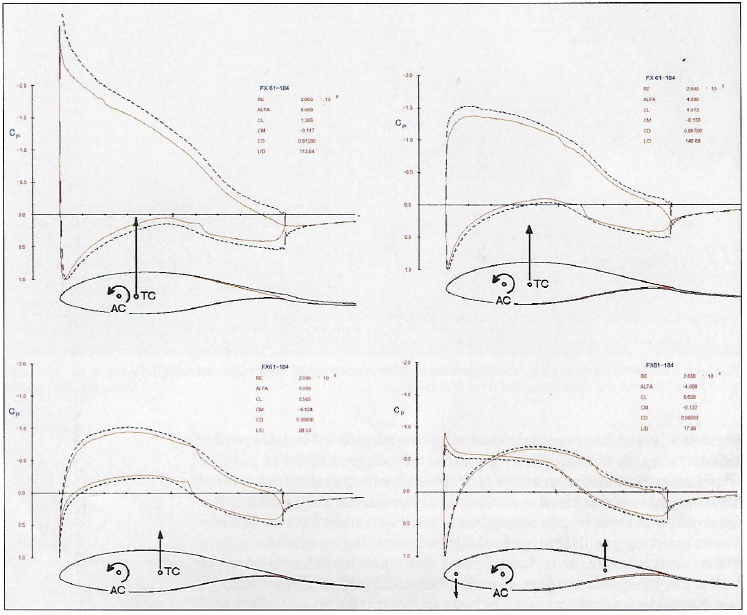 Not the answer you're looking for? Browse other questions tagged aircraft-physics or ask your own question.

19
Does lift equal weight in a climb?
1
Why is A320's CG optimum position at 25% MAC?
0
if center of pressure moves forward with angle of attack, then does it move forward of center of gravity also at a particular angle?
2
How does Bernoulli's principle contribute in lifting airplane?
1
How much force is produced by control surfaces?
3
Does the aerodynamic center always have to lie on the chord line?
0
When do the lift and drag vectors contribute a force component along a glider's path of travel as seen from the ground?
4
What exactly happens when power is reduced in trimmed, straight and level flight?
2
Does aircraft allways rotate about center of gravity like weather vane about pivot point?