Why does Schiphol airport have such a long taxi way? [duplicate]

I heard that from runway 18R-36L the taxi time is around 20 minutes, I heard that this runway was built and is used mainly to reduce noise pollution, but what reasons are there for the length of the taxi?

Firstly, I'd like to make clear that the particular reasons for the placement of the taxiway are not all publicly disclosed, and there are undoubtably multiple factors involved. After looking at the airport in Google Maps, I notice a couple things. (Excuse the large picture, explanation below!) 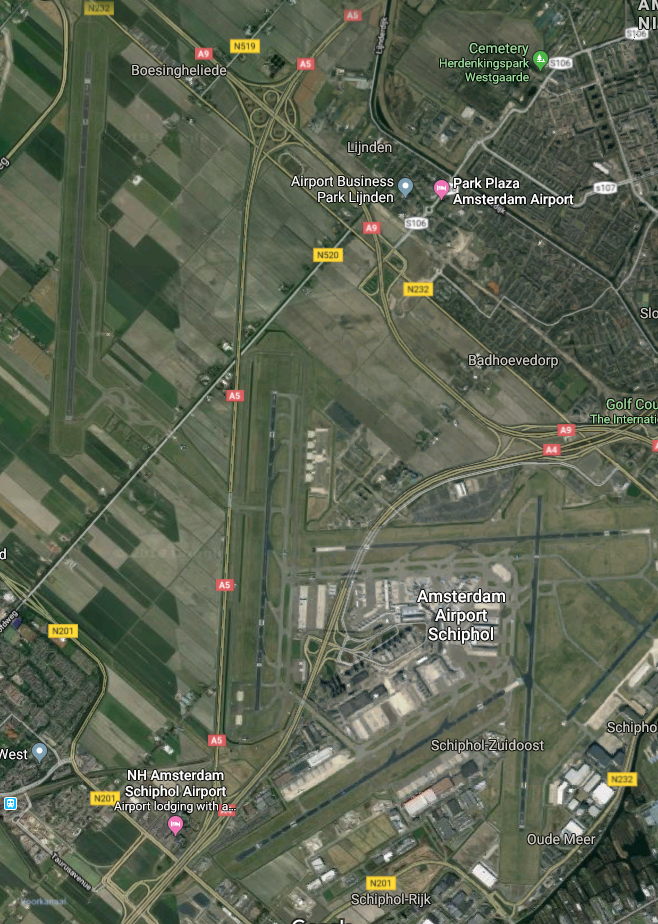 There is a pre-existing highway in between the runway and the rest of the airport. The runway could not be placed closer to the airport in the current direction without either removing the highway, or bridging over the highway (as the taxiway does). The highway would be unlikely to ever be removed, due to the extreme cost of removing pre-existing infrastructure, nor would they like to bridge a runway over the highway. Runways require a fair amount of maintenance in comparison to taxiways, and including a bridge in the design of said runway would drastically increase the cost and complexity of maintenance.

Looking at the map, there is absolutely nowhere to place a runway of that length and bearing without drastically engineering a solution. Beyond that, there does not seem to be anywhere within the "block" of the main airport to create a runway of that size, regardless of bearing.

The fact that the runway is in a less dense area also means that aircraft on approach would cause less noise disturbance for the populated areas nearer the core of the airport. In fact, for the northern approach, there are not many developed areas - it is primarily open fields. Aircraft are only allowed to takeoff to the north, and land from the north, on this runway, to avoid overflying the populated areas to the south of it.

The above reasoning we can be relatively certain about. However, there may be other contributing factors, such as ground quality. As there are rivers and streams nearby (including the one that the taxiway bridges), much of the ground may be more difficult to build on, and require more expansive foundations.

Regarding a taxi time of twenty minutes, there is certainly potential for a taxi of that length, but it is not due to distance. The distance is not anything extraordinary compared to many other "Hub" airports. The time is likely substantially increased by the fact that, if runway 18/36 is in use, they will likely be told to taxi around 18/36. The primary reasons for the creation of this runway, cited by the planning committee, were arrival/departure capacity and noise abatement.

While this is certainly not a very efficient system, it is certainly the only solution I can see to provide a runway of that size. There could be various improvements, but cost is the overarching factor.

Not the answer you're looking for? Browse other questions tagged commercial-aviation airport runways fuel noise-reduction or ask your own question.

23
Why does Schiphol Airport have such a long taxi?

19
How does having multiple ATC towers affect airport operations?
10
Is AMS (Schiphol) Polderbaan the runway furthest away?
13
How are taxi to and hold instructions given on an airport without taxiways to the runway end?
4
How are arriving aircraft assigned to runways?
2
What are ways to reduce drag and noise generated by the landing gear?
8
Why did this aircraft take off in the opposite direction compared to the one used by other flights right before/after it?
4
How does density altitude affect Taxi-Out Time?
11
Why does KBOS have such a short runway?