Not sure if this is going to be answerable to be honest, as I'm sort of asking for a bit of retroactive mind-reading! But here goes anyway!

I was driving along Clifton Drive North, Lytham Saint Annes, England on 17/11/18 (~3:30 pm if that matters) and I saw a plane approaching the adjacent Blackpool Airport at an exceptionally low altitude (not sure on model but looked like it might have been a Cessna 400-series). It's always hard to estimate altitude accurately (particularly given I was also driving at the time) but somewhere in the order of 200-300ft at the point it crossed over the road and descending (suffice it to say I was at least half expecting a crash!)

It was highly unusual - I've lived in the area for 5+ years, and travel that road frequently (typically at least 1-2 times a day and have been using the airport for even longer) and I've never seen a plane take that approach before. Here's the aerodrome chart for BPL: 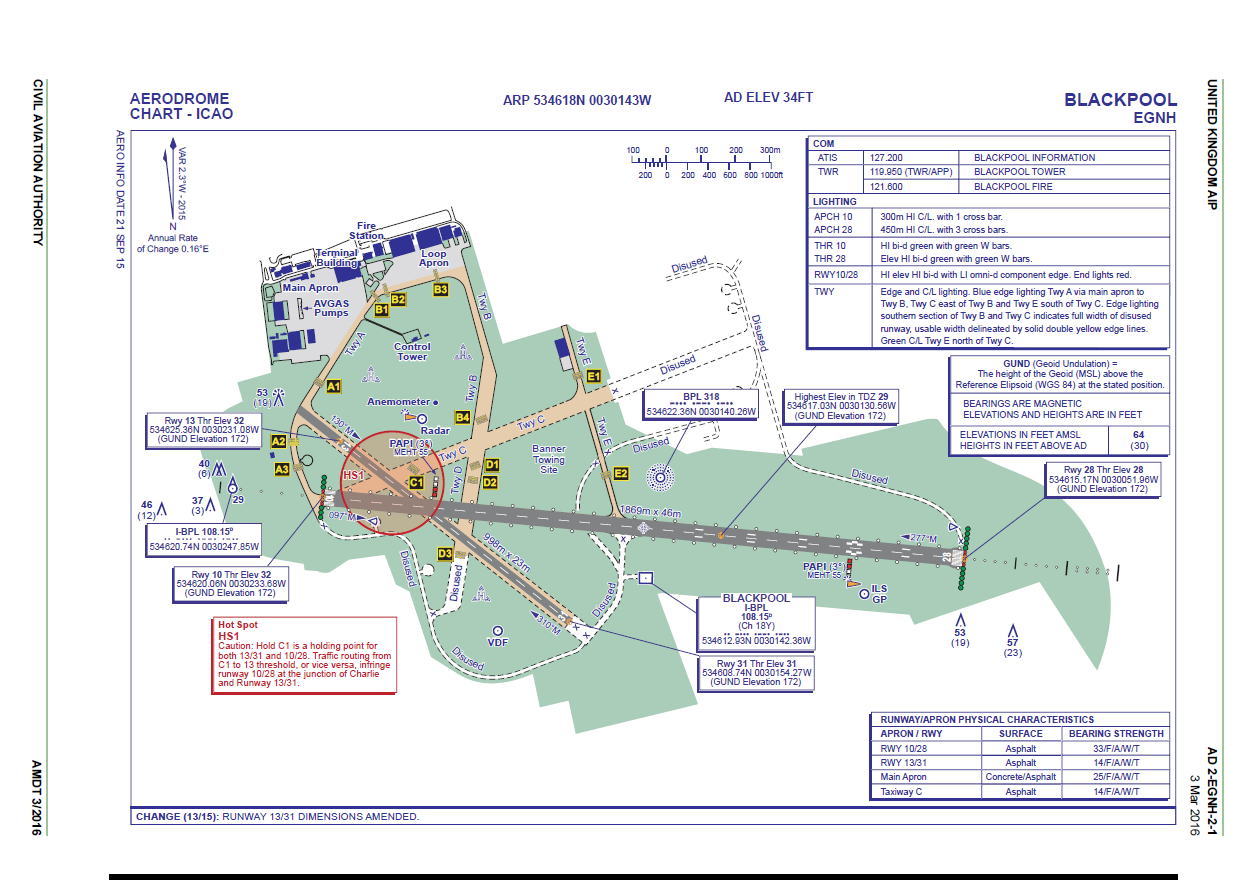 Pretty much every plane I've ever been on (either flying or being flown) has approached and landed on runway 28 - even when coming from the west (e.g. coming from IOM) the approach has always been from the SW, bearing around 50° and then turning right to about 270-280° before descending to runway 28 to land.

As far as my limited knowledge allows I believe standard altitude for approach to BPL for this is 2000ft and there is not a cat in hell's chance that this plane was anywhere near that!

I think it is possible to land on runway 10 - but that the approach path for doing that is to be coming in from the east at 1600ft bearing 256-281° and flying over before turning right to 92° and descending. The OCA for this path is 450-1000 depending on aircraft category, it's distinctly possible that the plane was at 450 (as I mention above my altitude as estimate was based off Mk 1 eyeball from a moving car so unlikely to be especially accurate!) but curiously I'm 95% certain that the aircraft didn't pass over coming from the east, I had been on the road for a good few minutes and there's nothing that would have obscured my view of them doing so - and I must admit I'd been watching the sky quite closely as I'd spent a large amount of the drive musing that conditions were fantastic and wishing I'd booked myself a lesson for that afternoon!

The plot thickens in that probably less than a minute after the plane passed over a helicopter (reasonably large - probably a offshore-rig transport) flew over on roughly the same path, but if anything even lower!

So I was wondering whether there was some circumstance causing ATC to advise a different approach from typical and what that might be?

As I mention above conditions were fantastic wind was very slight (unusually so for Blackpool at this time of year!), visibility was great - sunny with light hazy cloud that was well above (would probably have said 10,000-12,000ft +). Could operations at WRT (~6 NMi to the SSE) have had an influence?

The winds were coming from dead East 090°: See METAR, at >15kts. This strongly favours a landing on runway 10. The predominant winds in Blackpool are from the West, which may be why this is unusual to you.

The approach you mention is just one of the possibilities. The charts also give the option to approach directly from the West. Outside of the published approaches, one could imagine that ATC vectored the Cessna in on a quicker path to beat the incoming helicopter.

The low approach was likely due to the layout of the airfield, which has all the parking, pumps, on the north west corner of it. Also, once you're halfway down the runway there's no taxiways from the east half of the runway. 28/10 is 1870 meters (6135 feet) long and a light single probably needs 300-400 meters of it to stop. If the pilot landed 1/3 down the runway and then took 400 meters to stop they would have to backtrack to get back to the taxiway. If the pilot put it on the numbers then they might turn off on taxiway delta, or echo at the longest, clearing the runway sooner and having less taxi time.

Conversely, if you are in a light single on approach to 28 you'd want to aim for a 1/3 of the way, putting it down on the numbers means ages taxiing down the runway to the first turn-off point, all the while hearing the calls of those on late final having to go around because you're trundling down to Echo.

I would agree with the previous posts that prevailing winds from the East is the likely solution, but you mentioned that this was significantly lower than most approaches. One reason that one may fly a lower than normal approach is for a "no flap" landing. I can't speak for a Cessna 400 series, but the flaps on high wing light Cessna aircraft are controlled electronically. Should one lose their electrical system, they would land without flaps, at a higher rate of speed, and at a reduced angle of approach. This is something that should be practiced from time to time.

Not the answer you're looking for? Browse other questions tagged air-traffic-control airport or ask your own question.

18
What is the normal descent rate for airliners?
10
How can I find traffic patterns that pass over my house?
2
Why do commercial flights avoid overflying Shandong Province?
4
Is there a published airspeed and TPA for Class B approach at San Diego International?
48
How close can planes fly to each other over the ocean?
7
Should I mention an altitude restriction from the previous controller during an ATC handoff?
57
Did we get closer to another plane than we were supposed to, or was the pilot just protecting our delicate sensibilities?