How can reducing power too quickly on a piston engine damage it?

In many places, it's been stated that you should reduce power slowly to prevent engine damage. Depending on who you talk to, some say you should reduce the manifold pressure by 1 inch per minute, others say two. However, I'm not sure just how reducing power quickly will damage an engine, and if you do, what would happen. Could someone explain?

The main concern cited in regards to reducing power too quickly is that you could shock cool the engine. A sudden decrease in power, particularly at high altitudes where it is cold can cause a rapid decrease in temperature of the engine which can cause damage to the cylinder heads.

However the theory is very controversial because there is no evidence that the cooling causes a problem, and in fact the engine cools much more quickly when you shut it down at the end of a flight. A very good article going into more specifics about cooling of aircraft engines is here: the physics and metallurgy of "shock cooling".

One of the more interesting points that it discusses is that only about 12% of the heat generated from combustion ends up making its way through the block and is dissipated by air cooling (cooling fins). This means that most of the heat is already going somewhere else anyway (the largest part goes out the exhaust), and the "air cooling" doesn't make that big of a difference anyway.

As always, be sure that you follow all recommendations and limitations from your POH or engine manufacturer in regards to engine cooling, CHT's, etc. since they could have procedures for other reasons as well.

I'm generally not a fan of the shock-cooling theory myself, but I am a fan of "don't abuse your engine".

Piston engines have lots of moving parts. Abrupt power changes, whether caused by advancing the throttle or retarding it, cause all of those moving parts to change speeds faster than inertia and kindness would like.

If you want to be kind to your engine open or close the throttle at a reasonable pace during normal operations. Reasonable varies of course - Generally 2-3 seconds from idle to full throttle seems reasonable for takeoffs (you might be a little more aggressive on power-off stall recovery, but taking 1-2 seconds to push the throttle back in shouldn't really affect your recovery).
On the other side, you should rarely have to go from full-throttle to idle, but when practicing engine-out scenarios or similar taking a second or two to smoothly reduce the power from cruise to idle rather than simply yanking on the throttle is nicer for you and your engine.

Of course all of the advice above about being nice to your engine goes out the window in a real emergency - your priority is your safety, the safety of your passengers, and the safety of people on the ground.
If you actually stall the wing, or need to abort a takeoff, or anything else happens where your first instinct is a rapid power change don't hesitate to rapidly put the throttle where you need it, and the engine can like it or lump it as long as it does what its told.

I think one has to abandon the idea of shock cooling as a single event which will cause a cylinder immediately to crack. Instead one has to think about it as cyclic thermal fatigue where material damage will be accumulated incrementally through a number of such cyclic events.

Thermal cycles are an inherent part of the normal wear & tear that any IC engine has to endure and which in the end results in a finite TBO instead of infinite engine life. Start up of a cold engine, shut down of a hot engine or major changes in power setting belong to a normal operation cycle. The specified TBO of an engine implicitely contains a certain number of thermal cycles of these kinds that can be sustained without premature failure.

Turbine manufacturers who are dealing with similar life limiting problems take a more sophisticated approach and explicitely include both the number of cycles and the number of (continous duty) operating hours into their maintenance interval (=TBO) considerations. Furthermore the severity of different events is considered by applying respective weight factors. A cold start e.g. costs more engine life than a warm startand therefore has a higher weight factor. Now the analogy to the shock cooling issue should become apparent. In general each power reduction of a hot engine after a climb under fully power represents a thermal fatigue cycle for certain parts of the engine but the amount of incremental damage caused by this fatigue cycle is determined by a number of factors: How hot is the engine and how fast the is power being reduced. If it is done aggressively then the incremental damage will be significantly bigger than the damage caused by a gentle and gradual power reduction. Thus the engine will consume a disproportionate amount of its total life compared to a more careful handling. A crack will not form immediately but an engine that is treated in such a harsh manner on a regular basis will for sure not reach the full TBO.

A few words regarding the physics of thermal fatigue and cracking:

Now we have all ingredients to get a better understanding of what shock cooling really means: An engine that is very hot after a prolonged period of climbing under full power undergoes a rapid power reduction and simultaneously the plane is accelerated to a high airspeed (imagine the descent of a tug plane after an aero tow). The airflow inside the cowling is significantly increased and the engine is cooled down rapidly (and inhomogeneously). The resulting heat flux induces temperature gradients and consequential thermal stresses in the structure. While for most of the structure these thermal stresses are insignificant there are a few life limiting spots like exhaust valve seats etc. where a certain amount of fatigue damage is evolving due to these stresses. The actual amount of fatigue damage is determined by the severity of the event, i.e. the hotter the engine, the more aggressive the power reduction after the climb and the faster the acceleration of the plane, the more damage will be induced.

Coming to my initial statement: I don't believe in shock cooling as a single event that could cause cylinder head cracking in one go but I do definitely believe that such events as described above consume a disproportionate amount of engine life and premature cracking is very likely if this sort of mission profile is repeated too frequently.

Rapid throttle changes? Skydiving planes see a LOT of shock cooling, and they pay for it at overhaul time. And if you think cylinder heads don't dispose of a lot of heat, look at how cylinder heads evolved through the 30s-40s. The later R-2800 fins are finely machined, quite a contrast to earlier engines with cast fins.

And rapid throttle advance can eat you alive in some WWII planes. Many T-6's took their pilots into the weeds on TO. The BT-13 or PT-22 might snaproll if you got in a hurry with the throttle.

Geared engines - those where the engine drives the propeller through a gearbox so that the engine can turn higher rpms than the propeller - are also susceptible to damage if throttle is reduced too rapidly. You should never fly these engines so that the prop is driving the engine. In other words, the airflow through the prop tries to drive the engine to a higher rpm. Evidently the gear boxes are not built to take the forces in this direction.

So while flying a geared engine, throttle must be reduced slowly. Appropriate use of the prop control lever can also help

I cannot be sure the exact cause, but I suspect the rapid heating of the engine had the same negative effect, but in reverse order, of shock cooling.

Now, I make sure the engine is warm (via what ever is available...) before take off. The checklist may say "eng temp in the green", but why not let it climb up toward the middle of the green a little further to allow the engine to expand a little more before adding full power on take-off? The engine still has some heating and expanding to do while at idle, and is about to heat rapidly once take-off power is applied.

Maybe the majority of the engine stress/damage happens at take-off, not on descent.

In turbocharged engines, the impeller spins very fast (25,000+ RPM), has very small tolerances, and operates at EGT temps (since the compressor is driven by the exhaust gas).

According to the M20M (turbo Mooney) manual, these engines must be given a 5-minute cool-down period to ensure that the oil continues to circulate through the turbo, and carry away the heat.

The way I fly this plane is to reduce the mixture at the same time as the power when beginning the descent, in order to keep the temps up, and to increase the mixture slowly during the descent to bring the engine temps down. Then at shutdown, I run the engine with the throttle completely back, and allow all the temps (CHT, EGT, oil, and TIT) to stabilize. Once the temps are stabilized at the lowest power setting, no more heat can be extracted from the engine. 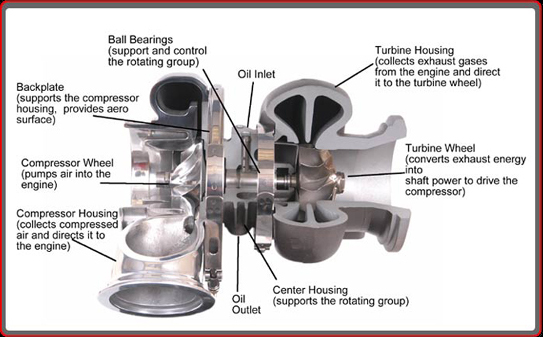 1
Purpose of CHT drop in piston engine shutdown procedures?
37
Why should jet engine throttles be moved smoothly?
7
How does skydiving flight cause shock cooling?
10
Is it bad for the engine to perform a touch & go?
2
Dangers to the Engine if CHT goes below minimum in flight during descent?