Why don’t large aircraft (larger than ~737-size) have even partial manual-reversion capability?

Large aircraft, on the other hand, generally have no manual-reversion capability at all. This is ostensibly due to the greater aerodynamic forces acting on their flight control surfaces at cruising speeds, which would require superhuman strength to completely overcome (despite the fact that, before hydraulic flight control boosting came into wide use, many, many large and fast aircraft were successfully flown with purely manual controls through the use of a number of force-reducing tricks). However, in a no-hydraulics situation, having any manual control capability at all, even with a significantly- to considerably-reduced control authority and range of movement compared with hydraulically-boosted operation, would be an extremely-useful adjunct to throttle pitch control and steering (which – especially throttle steering – are difficult, sluggish, clunky, and only really usable for coarse altitude and flightpath adjustments). So why don’t large aircraft have at least partial manual-reversion capability, despite even a little flight control authority being far, far better than nothing at all?

Adding in manual control mechanics for a large aircraft has serious drawbacks:

The alternative is to design a hydraulic system that can match or exceed the reliability of a manual system. Of course this is not without its own complexities and issues, but virtually all modern airliners have gone this route. The weight and complexity of a manual system are not worth the remote probability that such a system would be both necessary and useful.

You can't look at it and say that some worst case is theoretically possible and you have to design for that. The industry uses a failure analysis and risk probability approach for failures, with 4 main risk categories; Minor (not too big a deal, just extra workload - probability of 1:1000), Major (Significant increase in workload or difficulty for crew - 1:10,000), Hazardous (Someone gets hurt - 1:10,000,000), and Catastrophic (loss of the airframe) (1:1000,000,000).

So for Catastrophic events, the probability of a single component failure that causes loss of an airframe has to be better than one in a billion, and if not you have to add a backup to get it below that. One in a billion is pretty unlikely, but not impossible, and outlier failures happen from time to time, and sometimes it's because the system safety analysis itself was flawed (that happens in a lot of cases).

What it means is that if the fully hydraulic controls are designed with sufficient damage tolerance and redundancy to keep potential failures within that risk profile, no further backup is required, and such additional equipment is effectively considered "ballast" from a design for risk perspective.

It's a cold hearted numbers game on the surface, but you have to create some kind of arbitrary mathematical model to go from or none of it would work because airplanes would have to be overdesigned to death to cater to every possible eventuality. Great fodder for trial lawyers though.

Plenty of references available. Here is some info from page 16 of an NTSB accident report for a B737: link

From page 16 of the accident report identified by the link above: 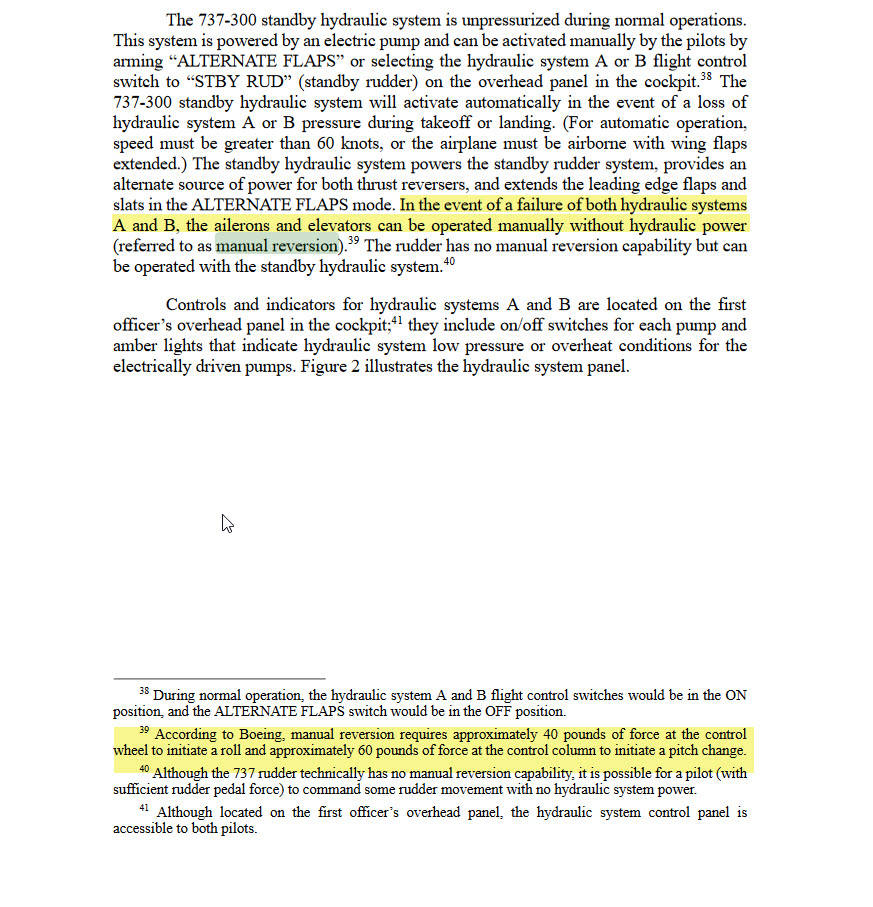 11
What aircraft had the first pilot-assisted controls?
2
Why didn’t the space shuttle have flight control manual-reversion capability?
3
Why didn’t the 757 have manual-reversion capability?
3
Why don’t airliners use stabilizer movement to assist with large pitch control inputs?
7
Why does the A320 use the rudder for lateral control in mechanical law?
5
Why do the A320’s primary flight controls have hydromechanical backups only for the rudder?
9
Are 737 pilots required to train in manual-reversion flight?
15
How controllable is the 737 in single-engine manual-reversion flight? Is it controllably landable (or go-around-able) in this condition?
6
How are the 737’s elevator and aileron cables attached to their control tabs without impeding the control surfaces’ motion under hydraulic power?
5
What is the meaning and origin of the phrase “dead band” in relation to flight controls?