Can quadcopters still fly with propellers at an angle?

Can quadcopters still fly with propellers at an angle? By this I mean like the whole motor mounts will be situated along a certain slope (so as to be neither horizontal nor vertical).

UPDATE I meant something like this (I know it's a crude diagram, but I hope it gets my meaning across better): 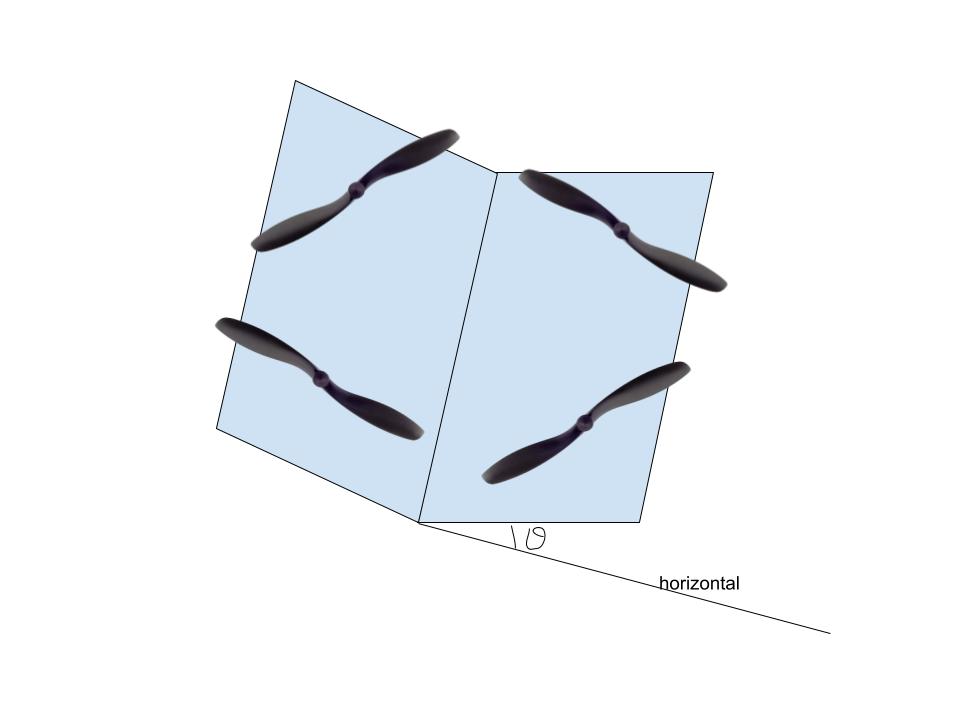 I don't think that's how most drones fly, if the surfaces the motors are on are folded in a way that resembles a flying motion of birds or butterflies.

Yes, you can. But it very depend with the angle (as in your drawing). If it is "folded) to make V-shape (that will make divergent thrust), then will reduce the lift compared to if the angle is opposite direction (inverted V-shape), which will make the thrust become convergent, it will produce more thrust. Both will work, but one is better than another. See this Akagi Helicopter. But the angle should not be high enough.

So, have the propellers mounted at an angle to each other? Sure, it'll still fly.

Normally, the propellers of a quadcopter all produce thrust in the same direction, and all of the thrust contributes to holding the quadcopter up (and to rolling and pitching it, depending on how fast the propellers are going relative to each other).

The result: the quadcopter will still fly, but it will waste some energy as it does. I'm not aware of any advantages to having the propellers angled like that.

There is also the cost aspect to consider.

It is far less expensive to alter the speed of the propellors than to tilt them, which involves heavier, swiveling mounts, plus extra motors or servos to swivel the propellers and motors, and more power needed to lift the extra weight and counter the loss of lift.

Note that on aircraft, propellers are always perpendicular to the direction of travel, to maximize the thrust they produce. Even true of tilt rotors, which typically operate with the rotors either vertical or horizontal, except when in transition from hover to forward flight and back.

Not the answer you're looking for? Browse other questions tagged propeller unmanned-aerial-vehicle angle-of-attack quadcopter or ask your own question.

6
Is it possible to fly horizontally with zero angle of attack?
5
What is the typical angle of attack aircraft fly at and at what angle of attack do they stall?
11
Why do propellers on aircraft have a slight offset angle?
7
Can quadcopters save energy by flying in formation?
2
quadcopters — should the propellers/motors all be at the same height
3
Could a quadcopter fly if its propellers were encased in cylindrical tubes?
0
Would a Chinook helicopter fly better with contra-rotating along with counter-rotating propellers?