What is a Simultaneous Offset Instrument Approach (SOIA)?

I have heard about Simultaneous Offset Instrument Approaches (SOIA), special procedures for runways that are spaced particularly close together. How exactly do they work? What are the requirements for an airport to be eligible for the procedure? What special requirements are there for pilots flying the approach?

SOIA (Simultaneous Offset Instrument Approaches) allow airports with parallel runways that are 750 to 3000 feet apart to conduct (almost) simultaneous approaches to the two runways. At an airport, one runway uses the ILS PRM approach, while the other runway uses an offset LDA PRM approach (with glideslope). SOIA refers to the LDA PRM approach, where another aircraft is flying the ILS PRM approach ahead. PRM stands for Precision Runway Monitor, which is a high-update radar system allowing for "equivalent" safety with reduced margins.

For a PRM approach is conducted, there must be two frequencies per runway:

Of the two approaches, the more interesting of the two is the offset LDA PRM approach. In the LDA PRM approach, aircraft fly an approach course that is 2.5 to 3 degrees offset from the runway heading, following the glideslope until the MAP (this course does not meet up with the runway threshold), at which point the pilot should proceed visually to the runway. 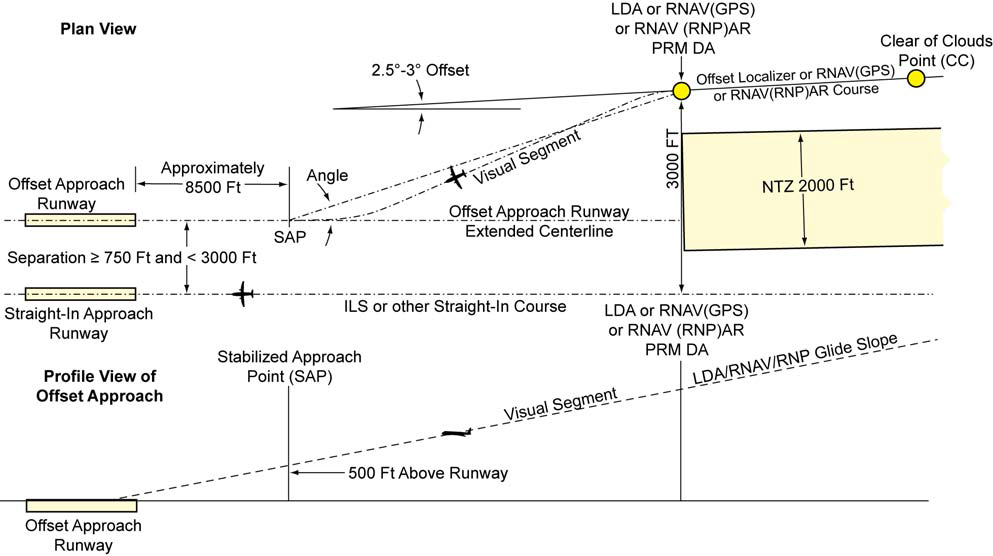 The MAP on a LDA PRM approach is 3000 feet away from the ILS approach course, meaning aircraft have to manoeuvre towards the extended runway centreline to be stable by 500 feet -- the less spacing between the two runways, the more aircraft will have to turn. This does mean that it is less suitable to larger aircraft, due to the manoeuvring required at higher speeds (than other aircraft), though most SOIA approaches are designed for larger aircraft as well. Before reaching the MAP, the pilot must have have:

This means that the aircraft on the ILS PRM approach should be ahead of the other aircraft. To allow time for visual contact, aircraft should be clear of cloud before the MAP, which is taken into account when deciding on the minimum cloud ceiling allowed for the approach.

The NTZ (No Transgression Zone) is a 2000 foot wide area between the two approach courses which aircraft must not enter at any time. ATC would immediately issue breakout instructions to both aircraft if an aircraft breaches the NTZ, as there would be very little horizontal separation between the two aircraft. [The FAA AIM][3] states that:

In the unlikely event that an aircraft "blunders" off its course and makes a worst case turn of 30 degrees toward the adjacent final approach course, closing speeds of 135 feet per second could occur that constitute the need for quick reaction.

An example of a SOIA approach is the SFO runway 28R LDA PRM approach: 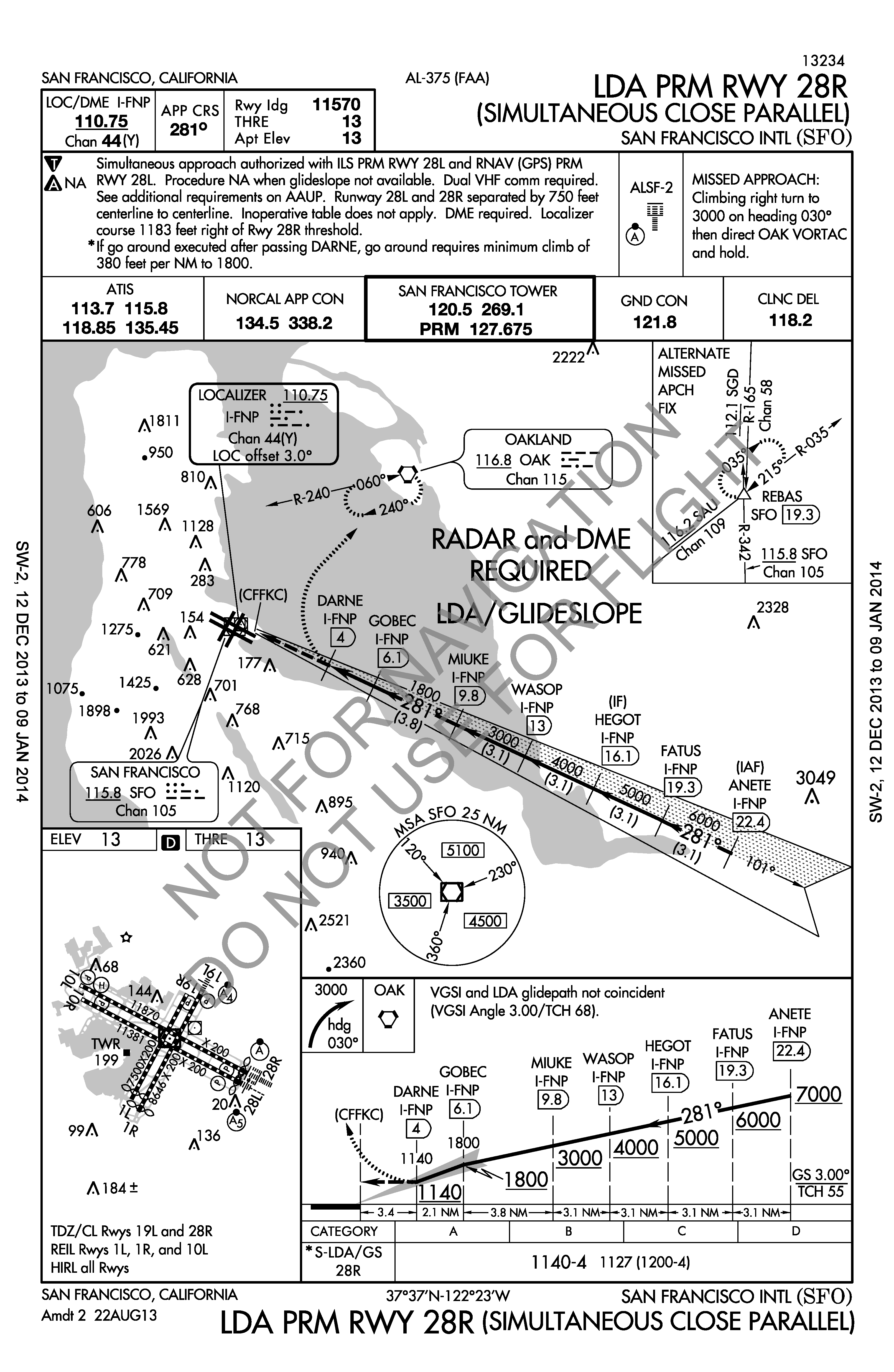 Not the answer you're looking for? Browse other questions tagged iaps runways approach instrument-flight-rules or ask your own question.

14
Do instrument approach procedures sometimes have a minimum temperature?
21
How are go-arounds safe with close parallel runways?
19
During instrument approach, is an abbreviated racetrack course reversal allowed?
6
Is it practical to fly IFR into Hawthorne Airport (KHHR) in IMC?
11
Why would the runway separation for parallel triple simultaneous precision approaches be dependent on airport elevation?
3
Can I fly a "Contact Approach" to this airport?
9
What requirements are needed to fly an approach that requires you to fly over the US/Mexico border?
1
When does an instrument approach "begin" per §135.225(a)
5
ICAO and EASA classification of instrument approaches
5
How are pilots prepared for a go around on a simultaneous converging approach when the "converging chart" is not published?