How can I calculate takeoff distance in a generic way?

I want to build a generic performance app.

For many of the aircraft the only available method is using the takeoff charts manually (I'm not referring to the more simple-to-calc short field charts but to the charts which consider also the wind components).

Is there a way to convert these charts into numbers that allow me to calculate the output once certain parameters (weight, OAT, PA) are entered? Is this data available somewhere? Or do pilots do it with chart and pencil for every flight?

(Not a pilot myself.)

For air carrier type aircraft, the chart you show in your question (sometimes called a "run-around-chart") is generally digitized in some form (performance data printed out on dispatch release, or in a Flight Management Computer on board the aircraft or handheld device provided to crews).

For light aircraft, likely there are many software apps available for the most popular types.

Here is a picture of an Apple APP I noted online for a Cessna 172. 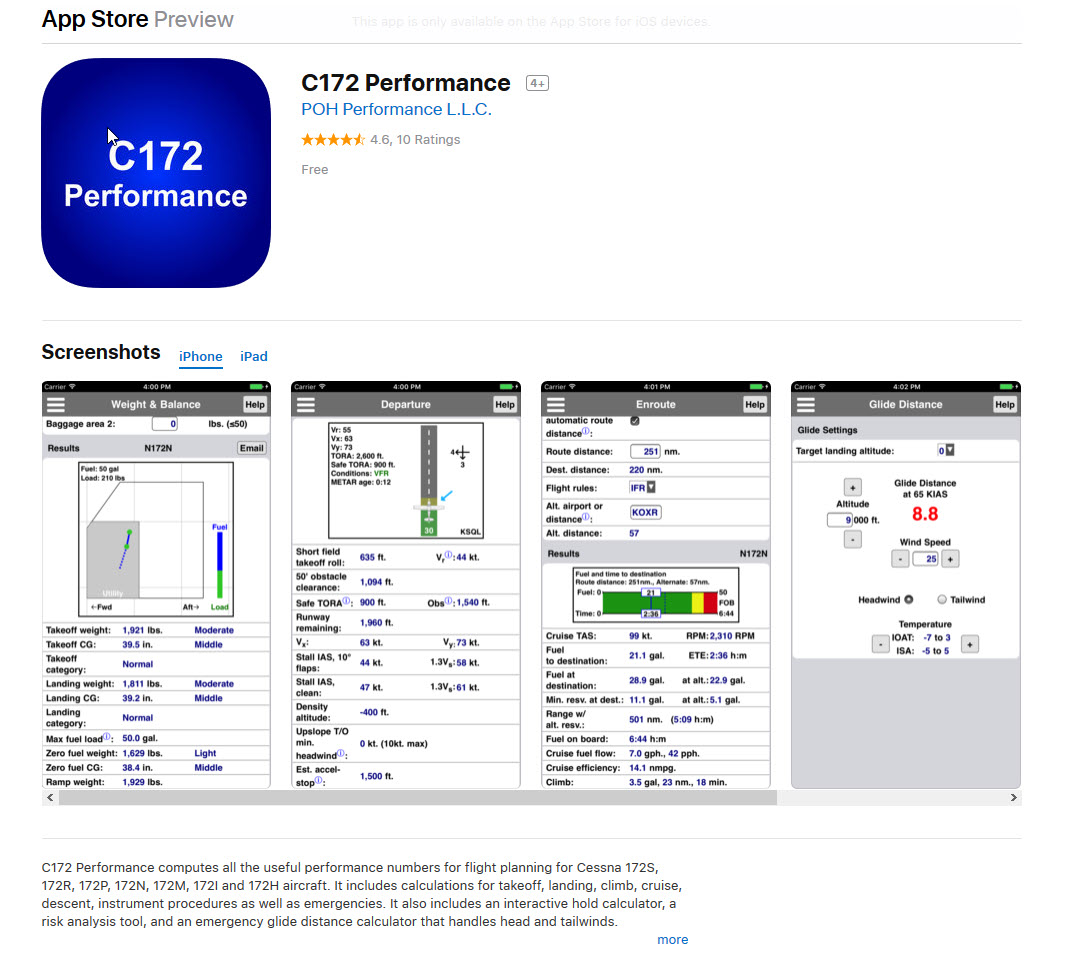 One way would be to calculate the total energy change needed for a take-off and then to calculate how long the engine has to run to provide the aircraft with that energy. Once you have time and speed, calculation of distances should be easy. Calibrate with the charts if needed.

The total energy is the sum of mass times speed change squared divided by two, weight times elevation gained (or lost) from runway slope and weight times the height when the take-off is complete. The speed change can either be from static to lift-off speed (plus or minus wind speed) or to the multiple of stall speed required by your definition when the take-off is complete.

While at the start of the take-off sequence drag will be negligible, you need to reduce net thrust by the drag of the moving aircraft. This is generally the hardest part, but if you are willing to accept some error, a simplified drag model can be used which assumes friction and rolling drag while the aircraft accelerates, then adds induced drag as the aircraft rotates and reduces overall drag as the aircraft accelerates after take-off. Also, don't forget to model the speed dependency of thrust as well.

Not the answer you're looking for? Browse other questions tagged aircraft-performance performance-calculation or ask your own question.

8
Does acceleration increase linearly on a takeoff roll?
8
How can one quickly estimate interference drag for a configuration?
4
What are the equations to compute takeoff and landing distance?