Why does Qatar Airways fly over Syria and Iraq?

I saw on Flightradar that Qatar Airways still fly over Syria and Iraq. Why do they think that airspace is safe? I dont want to have to worry about my plane being shot out of the sky on my trip.

They are trying to save themselves money, and their customers time.

First of all, why do the planes follow that route? From your comments, you are going from Philly to Doha.

You might want to take a look at great circle routes to see why the planes are coming into Doha from that direction. The Great Circle route depicted goes right through Syria and Iraq: it's the most efficient way to get there. Beyond that, Qatar has a few limitations that other airliners don't have, in that region, due to some diplomatic problems with their neighbors, who won't let them overfly their airspace: Saudi, Egyptian, and UAE airspace for the time being is closed to them. (thanks @reirab)

Some typical diversions in that region are well spelled out in this article in the Economist.

What you may be seeing is that, for some flights that pass over the region, rather than landing within the region, they are accepting the risk that their airliners at 30,000+ feet might, maybe, get targeted on a really bad day (see the Malaysian Airlines flight shot down over the Ukraine a few years ago (MH 17)). But the odds of that are very low. They most likely will not be disturbed. (Or so a risk management case can be made). A more conservative view of risk is offered here, in an Ops Group posting from September of 2018. (Thanks to @ZachLipton for the link). 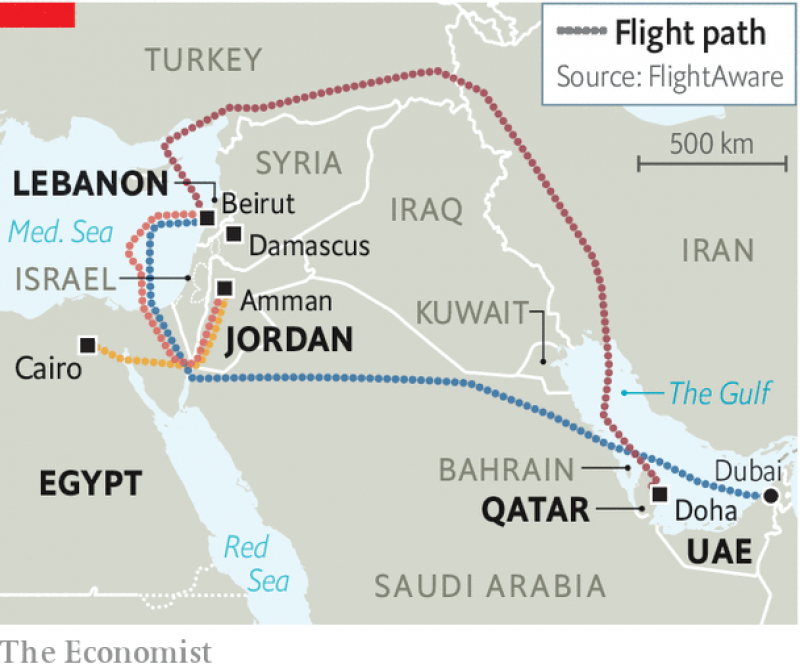 The article mostly addressed flight into Lebanon by Middle Eastern carriers. Flying into Beirut is of higher risk since the aircraft have to come down through the risky / war zone airspace for final landing, but it's instructive to illustrate how costs go up when more direct routing can't be taken due to safety precautions around conflict zones.

But for years the airspace over Syria has been crowded with warplanes. The Gulf airlines no longer use it. Instead Emirates, the flag carrier of Dubai, detours across Saudi Arabia and Egypt, adding 700 km to the trip. The journey takes even longer on Qatar Airways, which was barred from Saudi airspace after a dispute between the Gulf countries erupted last year. Its route from Doha to Beirut resembles a crook: north over Iran, west across Turkey and south down the coast. What should be a 1,825km flight drags on for 2,865km. {snip}
For travellers this is a nuisance, adding an extra hour or two to journeys. But for airlines it imposes real costs. Qatar Airways posted a 766 million dollar profit in the 2017 financial year. In the 2018 financial year, it lost 69 Million dollars. Operating costs were up by 15%; passenger numbers were down 9%. “We didn’t raise the ticket price,” says Akbar al-Baker, the CEO. “We had to absorb the additional cost.”

Emirates and Etihad, the flag carrier of Abu Dhabi, run five daily flights to Beirut. With the detour around Syria, they log an extra 2.7m km every year. Depending on the aircraft, that means up to 19 million litres of additional jet fuel, about $11.4 million at current prices. {formatting changes by me to make this fit}

@DavidRicherby points out, fairly, that this local problem is a bit different from the great circle route's need to make an adjustment, in terms of how much extra time and effort a given regional route costs, but it's useful as an illustration of how costs go up when these problems have to be dealt with.

Then don't. What you worry about is under your control.

Full disclosure: I do not now work, nor have I ever worked, for Qatar Airways.

Qatar is currently having a diplomatic conflict with Saudi Arabia, Egypt and the UAE. These countries have broken off diplomatic relations.

Their only overt ally in the Gulf is Iran with Turkey and Russia also being sympathetic to them. The rest of the Gulf states are not so willing to go against the Saudis. Not sure where Iraq and Syria stands.

Not the answer you're looking for? Browse other questions tagged safety airline-operations airspace or ask your own question.

5
Who decided which airspaces not to fly through and how?

16
How is airspace in the Persian Gulf determined?
4
Why does Turkish airlines still fly over Iraq, is it safe?
1
How much does it cost if someone falls ill before take-off?
9
What regulations apply to flying near blasting areas in Canada?
13
Why would Emirates fly over Iraq, avoiding Iran?
30
Why would the Pakistan airspace closure cancel flights not headed to Pakistan itself?
5
Is it safe to use a propeller plane to fly commercially over the Tibetan Plateau?
7
What is the expected reaction of a civil airliner pilot upon an invalid request from a fighter jet?