Is this photo of an aircraft in a flood genuine?

I stumbled upon this picture somewhere on the internet:

I don't believe an aircraft would be able to take off like that; I also don't expect a normal landing be allowed if this were on a runway. I suppose, in case of emergency, it could possibly land into such water. Generally, I think that either this picture is fake or the aircraft was parked at a stand before the area was flooded.

Unfortunately, as the picture was so small, it's virtually impossible to see any details, and thus difficult to analyse for "fakeness". Could this picture possibly be real?

The photo was taken by Gary Watt of Aberdeen Scotland and then photo-shopped using the "Flood Filter".

Hi all
Amazing how this image gets around after posting it to someone some months back.
Yes, it's a fake. It's my photograph taken at ABZ and the 'Flood Filter' done in Photoshop.
Great tool and can produce some fantastic effects.
For all the doubters, the engines ARE running as it was taxiing to 34 for departure.
I can still confirm it\'s fake and if anyone else thinks different, ye need yer heids examined
Cheers
Gary Watt 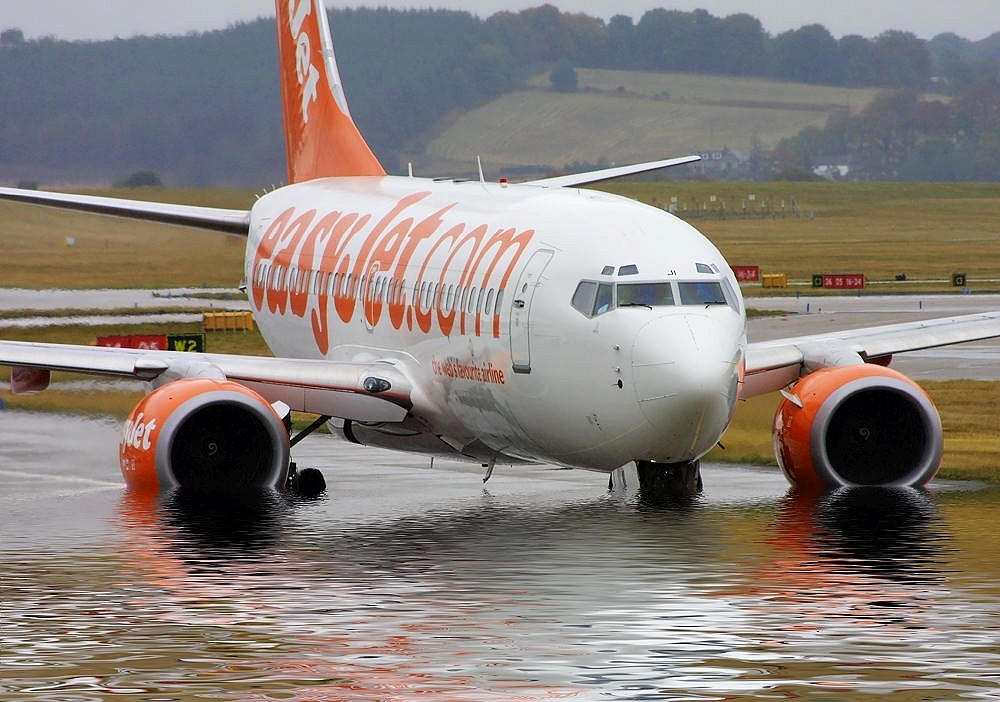 I found a larger version of the photo on this web page. I also found some comments about it here. Quoting from what someone said on that site: "There is no standing water anywhere else in the picture, there appear to be pilots in the cockpit, the leading edge flaps are set and there appears to be a lot of heat haze behind the starboard engine."

12
What difference does the choice of paved runway surface make to aircraft?
33
Southwest corner of LAX has peculiar airplane parts, what is this area?
25
What is this runway marking on Kirkwall Airport's runway?
9
What is this pattern on this runway?
11
How do Rapid Exit Taxiways improve aircraft movements?
28
What is this white rectangle painted on runway 23 at KCRW?
2
How did this Vampire's takeoff damage the runway so much?
8
Why did this aircraft take off in the opposite direction compared to the one used by other flights right before/after it?
1
What does this indication of '10∼15 degree' that points toward the both edge of runway means?
9
When does the ATC assign runways to aircraft arriving at an airport?