Why do we refer to “power” for turboprop engines and “thrust” for turbojet/fan engines?

Ultimately what you want from all three types of engines is quantification of thrust available to push an airplane through the sky. The turbofan/jet engines are self contained and produce thrust directly but a turboprop engine requires the addition of a propeller, which may have differing characteristics based on the installation.

Since thrust is not known for a turboprop until its installation has been determined, manufacturers instead quantify the power available to drive a prop. This allows engines to be compared so that an airframe manufacturer can make the proper selection.

Fuel flow is then related to either thrust or power as a measure of efficiency, depending on type of engine. There is generally no published mathematical relationship between power and thrust for a given engine. It is not needed for turbofans/jets and not possible to determine at time of manufacture for turboprops.

Jet engines directly produce thrust by exhausting gas (and in a modern turbo fan also moving a lot of air around them), so fuel flow rate is directly related to the thrust that is generated.

In a turbo prop the engine produces power which, via a gear box spins a propeller that generates the thrust. Since most turbo props have the ability to adjust the propeller pitch the engines power output is not always directly related to the thrust generated at a given time.

To expand on what Dave said, the term Power is used for turboprops because the thrust produced by the prop is a function of horsepower applied to the prop, that is, torque @ RPM.

The gas generator of a turboprop - the jet engine part - has its output indicated as a percentage of maximum torque it can apply to the propeller gearbox, whereas a pure jet engine, who's push results from the mass airflow accelerating through the engine, has its output indicated by Engine Pressure Ratio, the difference between the air pressure going in vs the air pressure going out.

Turbofans are kind of in the middle of the two, being sort of a turboprop with a fixed pitch many bladed propeller. Because the fan is fixed pitch and has no constant speed regulating ability, you don't need to know the torque being applied to it and it's sufficient to go by just fan RPM (N1, indicated as percent of max). Turbofans also show core engine RPM (N2), but the fan speed N1 is the primary power setting measurement.

For turbofans vs turboprops, its similar to how piston airplanes with fixed pitch props just measure RPM, like a turbofan, whereas piston planes with constant speed props need to show RPM and manifold pressure (MP being more or less equivalent to torque in a turboprop).

Not sure what you mean by the math part.

why you wrote that turboprop engines generate power, whereas while writing for jet engines you wrote that they generate thrust. This was my actual question? I understand mechanics of both, but why is it intentionally written different? Am I missing something?

So it sounds like the main question you're trying to ask is: what is the difference between power and thrust?

Thrust is a bit easier to describe. Thrust is often measured in pounds or newtons. If an engine is producing 500 pounds of thrust, then it's pushing on the aircraft with the same amount of force that a 500-pound weight would push on it. The difference is that the engine pushes forwards while the weight pushes downwards.

Output power is a bit harder to describe. Power is often measured in horsepower or kilowatts.

For rocket engines, the formula for output power is simple:

Unfortunately, most airplanes aren't powered by rocket engines, so this simple formula no longer applies, though. But the basic principles are the same:

Power production is directly related to power consumption. If you make an engine produce more power, then it will consume more fuel.

The real reason is that, by definition, a jet engine does not output any kind of power but outputs the thrust force instead. Turbopropeller engines do not output a thrust force but rather output a mechanical power through a shaft and gearbox supplied by said power by either a power turbine or the gas core itself.

That arrangement has to do more with how the FAA and other governing bodies defined these engines, not so much based on physics. I am aware that both engines are, in fact, generating energy and power, it’s just we don’t typically quantify energy output from jet engines that way.

Ironically many turbopropeller engines are often rated in equivalent shaft horsepower (ESHP) this is a sum of both the mechanical power delivered by the driveshaft and the reaction thrust created by the engines exhaust gases.

This also has regulatory impacts as well. Pilots of jet aircraft do not require neither a complex nor high performance endorsement in their logbooks to log PIC time in a jet, but it is required if your aircraft is powered by either a reciprocating or turbopropeller power plant.

Oau, a lot of answers and almost nobody touching on the real issue.

Propellers will produce a thrust that decreases with increased speed. Since power= thrust x speed, this means the engines will produce (more or less) an (almost) constant power throughout the speed range of the aircraft. Given a specific fuel flow, it will produce a specific (calculatable) power, which will translate to a varying thrust depending on the current speed. Therefore fuel gives you power.

Jet engines will produce a constant thrust (almost) regardless of current aircraft speed. This means “power” is not really a usefull measurement in jet (all of them are thrust-rated, not power-rated), as you can just double the current speed and the jet is now producing twice the power, even though you have not changed the fuel flow. A specific fuel flow to the jet engine will produce a specific (calculatable) thrust, but it can produce any amount of power depending on the current velocity of the aircraft. Therefore fuel gives you thrust

It is because in a turboprop, almost all of the energy extracted by the engine turbines is used to run a propeller. So, it is all about how much power that is required to turn the propeller. To measure the amount of force required to rotate the propeller, we use a sensor to measure the amount of twisting force acting on the propeller shaft. This sensor is called a torque sensor and in almost all turboprops, torque is the indication used by the pilots to control the engine power. But we all know that according to the power equation:

From the equation we understand that power can be increased by either increasing the torque or the RPM. So, how do turboprop pilots only use torque to control the engine power? Well, it is simple. In a typical turboprop engine, the propellers are variable pitch or you could say that they are run at a constant speed or RPM. This is achieved by a propeller control unit (PCU). In simple terms, as the pilot pushes the throttles forwards, and as the torque increases, the RPM remains constant at the pilot set value using the condition levers. The way it is done is very simple. As the pilot increases power or torque, the propeller tries to run at a higher RPM. But the PCU senses this and increases the propeller blade angle and slows it down until the set RPM is reached. Similarly, if you try to control the propeller RPM using the condition levers there will be a change in the torque. That is, if you pull back the condition levers (increase blade angle) to reduce propeller RPM, there will be a corresponding increase in engine torque. So, at high torque settings, you have to be very careful because you could over torque the engine. When we set power in turboprops and if requires a reduction in propeller RPM, we reduce the torque using the power levers first by a bit before reducing RPM using the condition levers. This is particularly important, when setting climb power after a take off which is done close to the maximum allowable engine torque.

So, in a turbprop engine, the combination of torque and propeller RPM gives a certain amount of shaft horse power (SHP). At full RPM and at full torque setting the engine will produce the maximum SHP. In a typical take off, the engine produces an SHP that is very close to this maximum SHP. 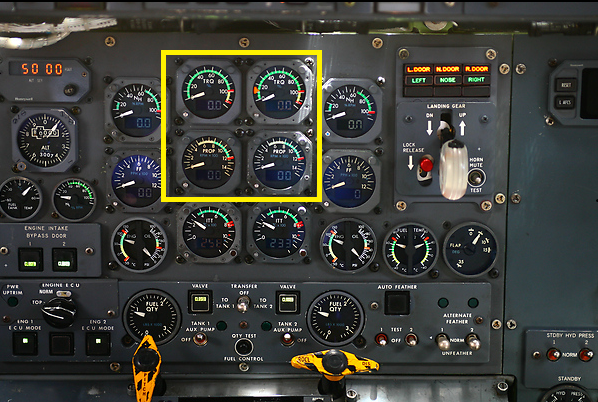 On the other hand, the turbofan engines measure pure thrust output. Some engines measure it as a percentage of low pressure compressor RPM (N1 percent). Why do we use N1? Because low pressure compressor or the fan produces most of the thrust in a turbofan. The amount of thrust produced by the hot section is quite small compared to the thrust produced by the fan or the bypass. In some other turbofans including old turbojets, the thrust measurement is given as a pressure ratio or more specifically an Engine pressure ratio (EPR). This is a more direct measure of engine thrust, as it is the ratio of engine exit pressure over inlet pressure. 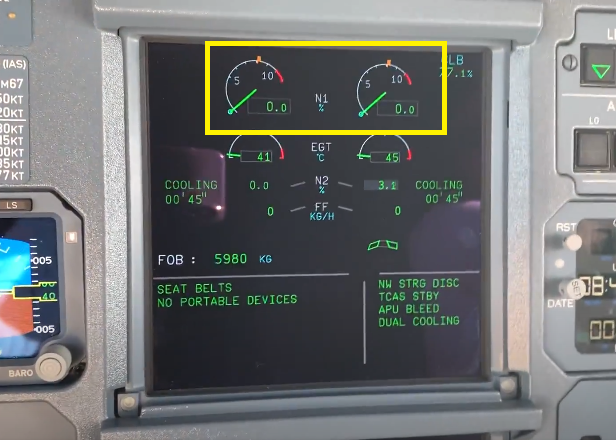 I thought even the engine design would be a bit different depending on your application. For a pure turbojet, you want maximum thrust out the rear, so maximizing torque turning a shaft isn't the goal. On the other side of the spectrum, going past the turbo fan to the turbo prop or even max torque application like a turbine generator, you want to minimize thrust and convert all expansion gas energy to torque.

That is why most turboprops use centrifugal compressors at at least one stage, and pure turbo jet engines use axial compressors. The former converts most of the expanding gas energy to circular motion (we will call it torque) and the latter accelerates that expanding gas for maximum air/gas velocity out the back for thrust.

A turbocharger in an auto engine or the turbo charger in a piston aircraft engine use centrifugal compressors similarly because they want to generate circular motion (torque) on an air compressor to increase the amount of oxygen in the combustion chamber.

I'm not sure if this is correct, because I just thought of it, but I did some research to confirm that pure jets want thrust, and axial flow, and high gas velocity at exhaust, and turboprops want torque, to turn a shaft into a psru then a propeller, so these engines have different compressors that convert the energy into different types of motion.

Not the answer you're looking for? Browse other questions tagged turbofan turboprop turbojet or ask your own question.

32
Why don't small planes use turbine (turboprop) engines?
6
What does the condition lever in turboprops control?
2
What is the fuel mass flow rate at stationary full power for the CFM56 5C2/3C1 engines?
0
How to compare turboprop engines and with which values?
0
why are turboprop/turboshaft engines rated only in horsepower and never in ft-lbs of torque like diesel engines or electric motors?
0
Turboprop vs Turbofan: How to compare Specific Fuel Consumption
2
Why was there no thrust from the engines in the TACA Flight 110 incident?