Does the pressure at the static ports drop as the aircraft's speed increases?

This answer by Tyler Durden explains what static ports are and how they work:

The "static ports" allow air into the instrument to provide the input for the air pressure on the side of the aircraft. They are called "static" ports because in general they take in air at the ambient pressure which does not change very much [...]

Currently, the answer has a comment by Zeiss Ikon which states:

In fact, the pressure at the static ports will drop as the aircraft's speed increases (Bernoulli principle) [...]

Is this true? If I'm flying at a constant altitude, will the pressure at the static ports decrease as I speed up and increase as I slow down?

If so, does the altimeter have a mechanism for compensating for this?

In fact, the pressure at the static ports will drop as the aircraft's speed increases (Bernoulli principle)

is not exactly accurate. The aircraft is a complex aerodynamic shape and static pressure distribution across the fuselage is not linear. An example is provided by the following figure from NASA Technical Memorandum 104316: 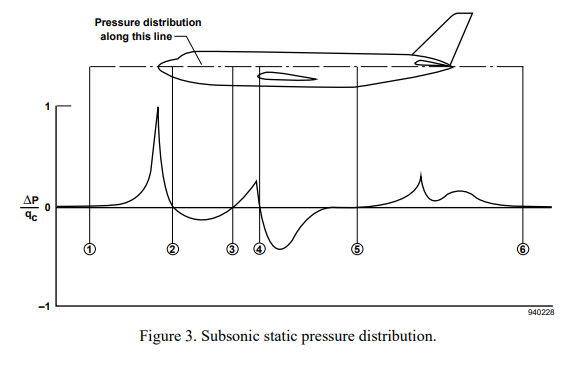 If you look at the graphical part of the above figure, you'll see areas where the pressure is above (>0) and below (<0) the reference pressure. As the airspeed increases, the tendency will be for the positive values to get bigger and the negative values to get lower (more negative). So along the line between points 2 and 3, and also between 4 and 5 (over the wing), the pressure will drop as speed increases. Between 1 and 2 (the nose), and between 3 and 4 (just in front of the wing), the pressures will rise with speed.

From the same report:

Zero static pressure error on the fuselage exists at locations 2 through 5. One of these locations is chosen for the static port. To keep pneumatic lag small, the static port is normally located as near the airdata instruments as possible (or the other way around). (To determine this location precisely, several static ports are made in this area. The optimum location is then selected as a result of comparing the various ports with a reference source, such as a trailing cone.) This pressure distribution changes with flight condition, so a calibration over the flight envelope may still be necessary.
...
Even with the selection of the best static port position, some pressure errors will remain, and these errors must be determined in flight. The difference between the locally measured static pressure and the ambient static pressure, which is dependent upon angle of attack, airspeed, and aircraft configuration, is called position error.

Based on the measured position error, a Static Source Error Correction (SSEC) table is developed. The SSEC is loaded into the air data system when it is installed in the aircraft so that it can make the necessary corrections.

For a basic shape, such as a sphere, the pressure on the side of the object would indeed decrease due to Bernoulli's principle. However, as Gerry's answer points out, a plane is much more complex aerodynamically. The graph in Gerry's answer shows how pressure decreases at some points, increases at others and is unchanged in some.

For indicated airspeed, a small error could be adjusted out easily enough. After all, the pressure difference would still be mostly linear in relation to air speed, so just calibrating the scale on the airspeed indicator would suffice.

But the static ports are also used for the altimeter. For this reason there is a strong incentive to find a location that minimizes the so called position error in the static pressure measurement. Otherwise when indicated airspeed changes, the indicated altitude could also change, which would be much more difficult to compensate for.

So in summary: no, for a well-designed plane, the speed-induced pressure change at static ports will be minimal.

Not the answer you're looking for? Browse other questions tagged aerodynamics aircraft-physics pitot-static or ask your own question.

3
Static port and Bernoulli
12
What are the "Static Ports" in a Boeing 767?
6
Why does the faster-moving air over the static port not result in a lower static pressure?
3
How can static pressure be obtained over a range of airspeeds?
2
Why is the alternate static pressure lower than the standard static vent pressure regardless of the venturi effect on both?
0
Is air velocity at aircraft static port always same as freestream velocity?