What are the correct procedures for military aircraft interception over international waters?

I recently read this list of errors in the film Top Gun. The list is long and fairly well done, but there is one I realized when thinking about that movie and that is Maverick may have actually caused an international incident at the start of the film that precipitated into the climactic dogfight at the end. That is, they intercepted the MiGs at the beginning of the film in an unprofessional and hostile manner which is not used when intercepting another aircraft over international waters.

Aircraft interceptions are a common occurrence in international airspace but there are specific procedures involved and protocol used to avoid an international incident. Typically a two ship flight will maneuver alongside an unknown aircraft to visually identify it. Any additional actions ie creating a collision hazard from a head on cross or hard maneuvering onto an aircraft’s six then tracking it with a fire control radar, as Maverick does at the start of the movie can be interpreted as a hostile act and could actually warrant use of force. Therefore Maverick may be the aggressor here and the second MiG maneuvering for a shot at Cougar and lighting up his F-14 with its fire control radar would be a reasonable response to the F-14 two ship’s aggressive act over international waters.

Soviet aircraft routinely approached US carrier battle groups during the Cold War, in some cases coming within 1/2 mile from the battle group. They were intercepted on a regular basis but never in such an aggressive manner as is shown in Top Gun. Unless said Soviet aircraft were acting in a provocative manner with posed a direct threat to the ship or the air wing aircraft, there really wasn’t much you could do as you were in international waters and subject to international law. Doing otherwise would have been an act of war.

The F-14 and its AIM-54 Phoenix missile was originally built for a particularly unfriendly intercept of Russian bombers from 100nm away in war time.

In peacetime, the TU-95 Bear bombers still needed to be intercepted. That practice, at least in the north Atlantic, was usually for one of a pair of F-14s to fly directly toward the intercept point and well above it, while the other was several miles in trail and on the side that would be to the rear of the bomber(s) after intercept. The first would overfly and make a descending turn to end up about a mile in trail, holding position there while the second did the same thing. This ensured that (depending on ROE) weapons could always be directed at the bomber by one or the other F-14's throughout the approach.

Sometimes the F-14s were tasked with (really, permitted to) close with the Bear to "gather intelligence". This resulted in lots of great pictures. You'll note that usually the F-14s in those didn't carry Sparrow or Phoenix missiles so they'd constitute less of a threat while closing (there were exceptions, though). The Bear is about the size of a B-52, and depending on the day's plan you could come within a couple (Bear) wingspans of one. This in theory was risky (they had a rear gunner who's arc of fire you were to avoid) and took it out of your missile envelope, but you did have a gun... 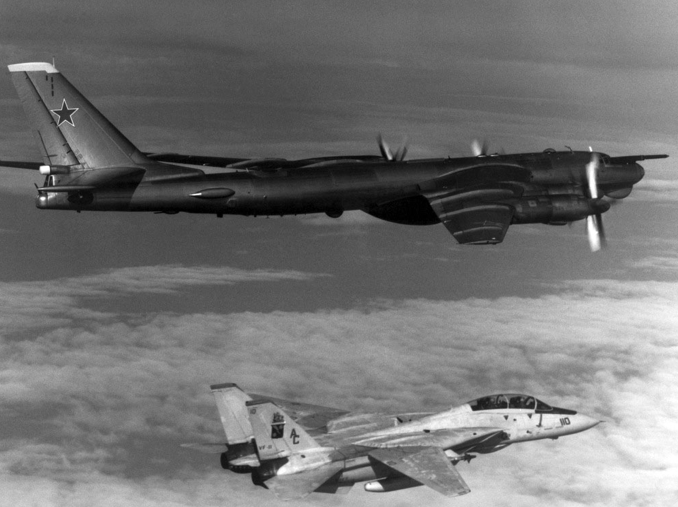 As the Bear got closer to the carrier, more F-14s would arrive and things would get a little spread out for deconfliction. 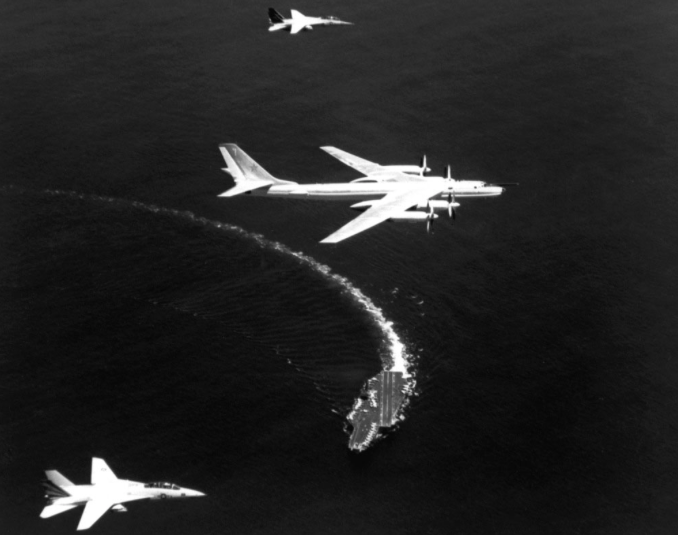 But everything was smooth, slow, and initially done from a significant distance. Nothing at all like the Top Gun intercept, which would have permanently grounded all four crew members.

The manoever in the movie is risky and unrealistic. What do you expect from Tom Cruise? ;-)

There is indeed a Manual concerning Interception of Civil Aircraft governed by ICAO. It says:

4.1.2.1 The following method is recommended for the manoeuvring of intercepting aircraft for the purpose of visually identifying a civil aircraft:

There are briefing documents for pilots who might find themselves being intercepted by Air Force or law enforcement for any reason. For example:

The basic idea is that both, interceptor and intercepted aircraft always act in a predictable manner.

Now, how much the Air Force or law enforcement will follow or deviate from this standard approach might depend on the specific situation and - just my guess - personalities.

Not the answer you're looking for? Browse other questions tagged military flight-interception or ask your own question.

1
Can a general aviation aircraft be forced to land when crossing the airspace of a country?