What is this fighter-like plane with huge wings?

Can anyone identify this strange plane? It looks like they took wings from a bomber and put them on a fighter body... What was its purpose? 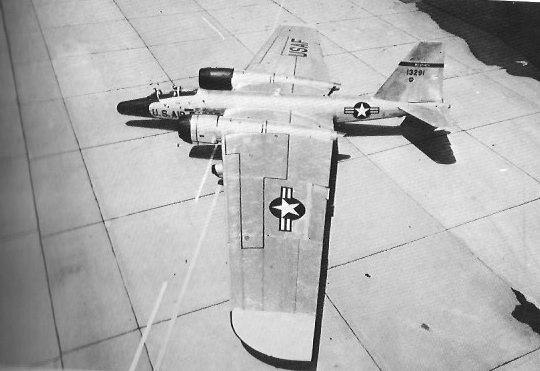 The RB-57F was derived from the Martin B-57 Canberra, a tactical bomber and reconnaissance aircraft built on license from the British English Electric company. With its enlarged wings and more powerful engines, the RB-57F gained extreme altitude capabilities. It can climb up to 24,000 m (80,000 ft). It was developed and built for the US Air Force. The first flight was in June 1963.

900 British and 49 Australian Canberras were built. 403 American B-57s have been produced, of which 21 have been converted to RB-57F. Some aircraft were operated by the air forces of Pakistan and Taiwan. Two RB-57F crashed on USA territory, and one aircraft was lost over the Baltic Sea. Only a few aircraft have been salvaged. Most of the RB-57Fs ended up at the AMARC bone yard (source).

The particular aircraft on the question's picture with serial number 63-13291, was converted from a B-57 in 1964 and served the US Air Force till 1974, when it was put into storage at the AMARC bone yard.

Today there are still 3 planes (now called WB-57) in service for the NASA Airborne Science Program.

There is a Wikipedia article about this type.