Flight physics for a roll [closed]

I am working on a pet project to write a game with flight physics. It will not be a simulator but instead much simpler.

What I have done so far

I have created winged components that generate lift and drag using the basic formulas I found online. I apologize if some of the debug info is not standard terminology. 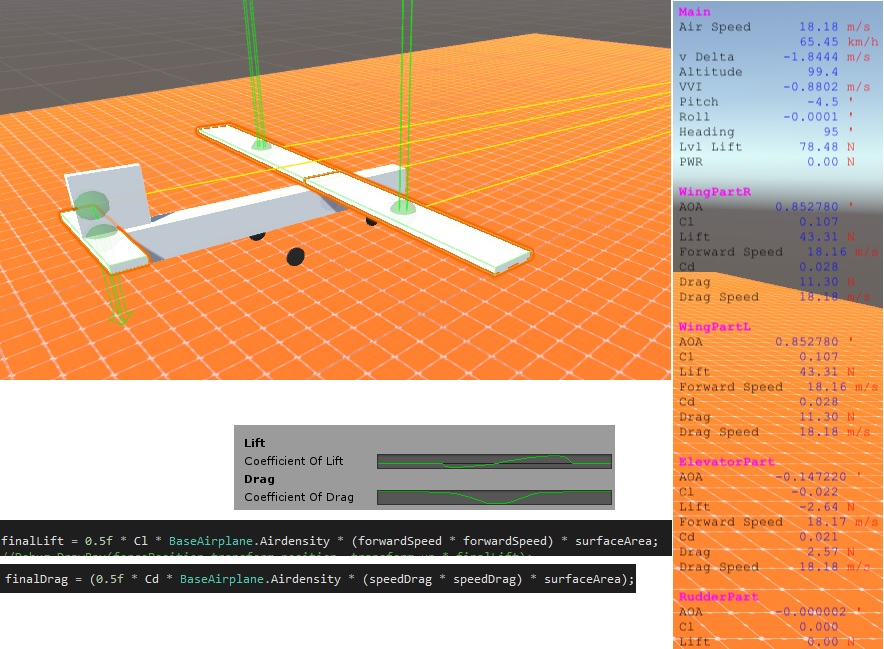 The green arrows in the image show the force and magnitude begin applied. The yellow lines are the relative airflow.

What I cannot get working and understand

At first all the components used the same forward speed calculated by looking at the CG. Just an easy way to see what speed the plane was moving. The plane flew straight when "thrown" level and if will self correct if thrown with a slight roll angle. 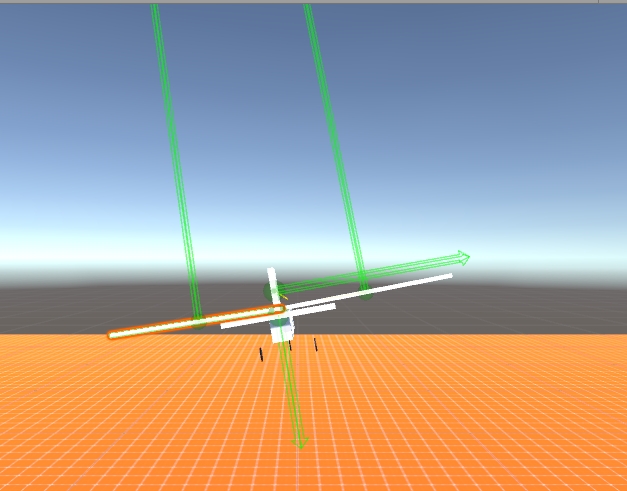 The problem starts when each component starts calculating its individual forward speed. Even with dihedral applied to wings the plane will start rolling to the left more and more. 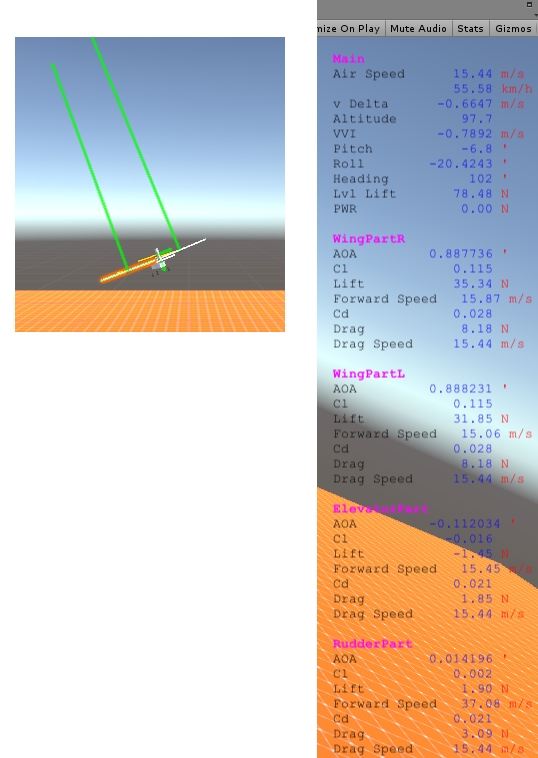 I have tired to increase the rudder, but that didnt help at all. Removing the rudder causes the plane to over correct, and then to roll to the left too.

Can any body explain what is suppose to happen when a plane rolls. From what I see the plane rolls left, it pitches slightly down. The right wing "swings" forward faster than the left causing more lift.....

Typical airplane is not stable in roll. The outside wing flies a bit faster, which does indeed make it produce a bit more lift and that in turn will make it bank into the turn, tightening it and if left uncorrected, ending in a spiral dive.

In a coordinated turn, an aircraft even can't be made stable in roll. There is no way to create a restoring force without involving side-slip. The only thing that can be provides is the yaw-roll coupling where a slip produced a rolling moment into the slipping turn. This rolling moment is affected by dihedral and sweep.

Fortunately as the turn tightens, if the rudder is held fixed, some slip does develop that can provide the restoring force reducing the bank. However, it causes another dynamic mode, the Dutch roll.

As the bank increases, the tendency changes from Dutch roll to spiral mode. If you wanted to avoid the spiral mode, the Dutch roll would be very strong, so practical aircraft are designed with moderate yaw-roll coupling and do require a bit of opposite aileron in turns.

Your question is challenging to understand quickly, let alone answer well. For starters, what exactly are you doing with dihedral? Do you understand how the roll torque created by dihedral, in any given situation, is entirely due to sideslip, and the resulting way that the sideways airflow "sees" each wing at a different angle-of-attack?

If not, that's one thing that would need to be fixed before you can continue with this. If you want your "model" plane to automatically tend to slowly roll back toward level in the absence of aileron deflection, you are going to have to model how banked, turning flight involves a curving flight path, which means that there is a curving aspect to the relative wind, which tends to make the vertical fin "feel" a sideways airflow, which generates a yaw torque that displaces the nose toward the outside of the turn, exposing the wing to a sideways airflow. Like this: https://www.av8n.com/how/htm/yaw.html#sec-long-tail-slip . It's not sufficient to imagine that the plane just tends to "fall" toward the low wingtip whenever it banks-- that's not really what drives the slip. It's all about the curving flow. And it's certainly not correct to imagine that the dihedral (or the high wing placement) will create ANY self-leveling tendency at all, in the absence of slip (sideways flow).

So basically there's so much going on here that you may need to ask about ten different questions to even start to "unpack" how your computer model needs to be improved. A good start would be to peruse this website and play close attention to all sections that deal with yaw stability, roll stability, sideslip, roll control, etc -- https://www.av8n.com/how/

It's normal for an aircraft with only modest dihedral to tend to wind up into a steeper bank angle, but if you aren't accurately modeling the stabilizing effects of dihedral, as I'm guessing may be the case, you'll end up over-estimating this tendency for the bank angle to increase on it's own.

I'd encourage you to try to think of some more narrow, individual questions to ask to help you "unpack" your problem some more.

Not the answer you're looking for? Browse other questions tagged flight-controls aircraft-physics roll or ask your own question.

14
How could a failed left wing cause a roll to the right?
9
Are the functions of ailerons and rudder similar?
12
Why is using opposite rudder and aileron necessary in left turn for coordination?
7
Do helicopters need to use yaw pedals to fly a coordinated turn?
18
How do elevons work to roll a flying wing?
16
Why not use the yoke to control yaw, as well as pitch and roll?
1
How much force is produced by control surfaces?
14
What causes a plane to lose its roll momentum