Navigate to the final approach course after radio failure under IFR

What would ATC expect the pilot to do if, at the position marked below by the red X, the aircraft lost radio communication and was on a radar vector heading 250 degrees at/assigned 3000 msl and the pilot was told to expect the ILS approach to Runway 7 Right? Assume the IFR aircraft did not have DME, RNAV or GPS equipment and the weather was IMC. 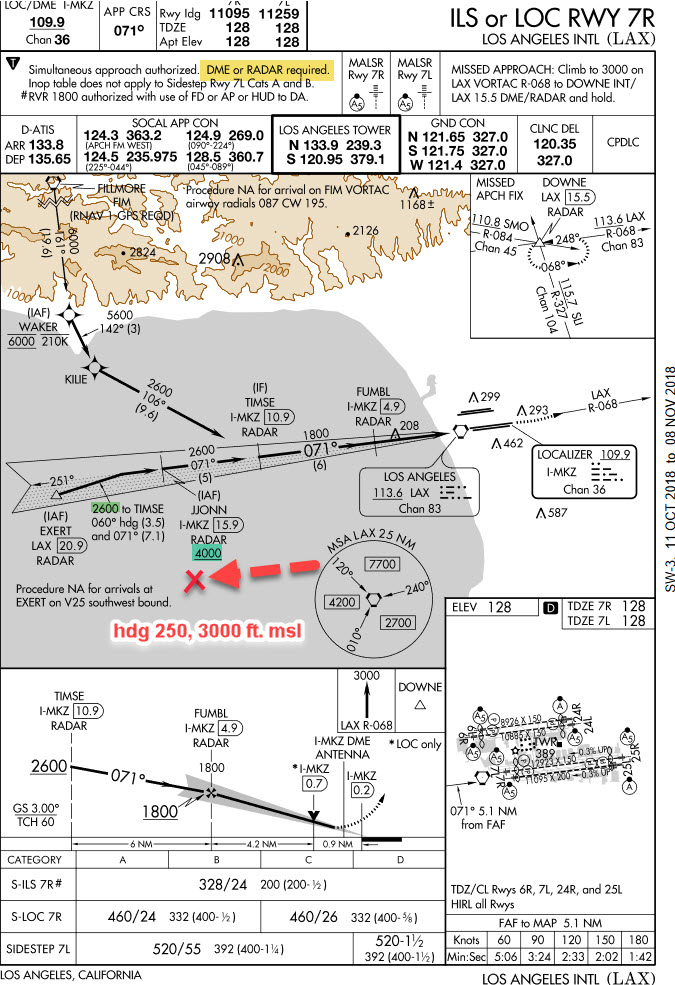 First, squawk 7600 to let ATC know you have lost two way radio communications and to clear traffic out of your way.

Then, from the AIM, Section 4. Two-way Radio Communication Failure

1. General. Unless otherwise authorized by ATC, each pilot who has two-way radio communications failure when operating under IFR must comply with the rules of this section.

This is the preferable solution, but the question said to assume the conditions are IFR. Which leads to (displaying only applicable sections):

3. IFR conditions. If the failure occurs in IFR conditions, or if subparagraph 2 above cannot be complied with, each pilot must continue the flight according to the following:

(a) Route.
...
(2) If being radar vectored, by the direct route from the point of radio failure to the fix, route, or airway specified in the vector clearance;

(1) When the clearance limit is a fix from which an approach begins, commence descent or descent and approach as close as possible to the expect further clearance time if one has been received, or if one has not been received, as close as possible to the Estimated Time of Arrival (ETA) as calculated from the filed or amended (with ATC) Estimated Time En Route (ETE).

So the expectation of ATC would be that the crew would fly outbound, make a right turn and intercept the localizer and fly the approach.

It would be a challenge to fly it without DME, but not impossible from the starting point. Radar or DME (or GPS) is needed to get to the IAF. If the pilot had a good estimate of his location when comm was lost, it would be to fly outbound for about 1 minute and then a right 180 deg turn to intercept the localizer. Once the glideslope is intercepted, being on GS plus altitude allows to to estimate passage of TIMSE and FUMBL. The rest of the approach can be timed.

Squawk 7600 and fly the ILS RW 7 approach he was told to expect in a further clearance.

I'm not sure you could / would want to land here if you were in IMC. The MSA is 4200 ft and you are at 3000 ft. If you don't have any VFR charts on board, you don't know where those obstacles are. I would climb to 4200 so you are not going to hit anything and find somewhere else to land that's VMC.

Not the answer you're looking for? Browse other questions tagged instrument-flight-rules lost-communications or ask your own question.

9
Can an aircraft operate IFR without ground-based navigation?
6
Can I fly solo when practicing IFR under the hood?
11
Is a VOR check required to legally fly an ILS approach under IFR?
19
Lost radio communication after take-off in IMC - what are my options?
4
Is it practical to descend in a lost communication scenario?
10
How to start an approach in IMC loss of communication under IFR?
6
Can I use actual IMC time for the requirements in 61.109(a)(3)?
8
Is the phraseology in the early portion of the movie The Net realistic?
0
What should a pilot do in this lost communication scenario?