What kind of flight termination measures are taken for supersonic aircraft?

Having recently read an article that hyper-sonic airplanes carry enough energy that just flying into some target makes them as powerful as some missiles and I wonder if the supersonic planes have been around for so long, what measures were taken if they misbehaved or went out of control. I've heard of crashes with pilots, but what about terminating the aircraft mid-air after getting the pilot to safely eject. With more UAVs and drones being used, what measures are taken to terminate the flight of such a system in case of a loss of control? I know of such measures for rockets but am unaware for flights.(Commercial ones have FAA guidelines or other national ones to follow)

P.S. Are there any books on such design or discussions about such situations. Please recommend.

Aircraft like the B-58 and XB-70 Valkyrie were equipped with escape pods to aid in super sonic ejection. The pod its self came down around the seat when activated the only movement that appears to have been required was bringing you legs up a bit. Heres some video of the capsule in testing. 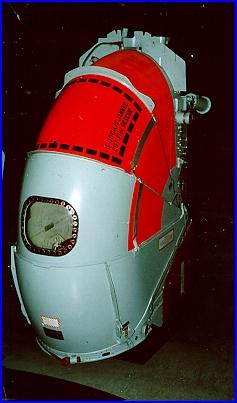 You can find some more info on the only XB-70 capsule ejection in the answer here. There is also some interesting info on the topic in this Physics.SE answer.

Ultimately getting lower and slower may be your only option as was the case during an SR-71 ejection.

Since the chances to survive an ejection at Mach 3.18 and 78,000 feet weren’t very good, Weaver and Zwayer decided to stay with the aircraft to restore control until they reached a lower speed and altitude, but the cumulative effects of system malfunctions exceeded flight control authority. Everything seemed to unfold in slow motion, even if the time from event onset to catastrophic departure from controlled flight was only two to three seconds.

It was at that point that the pressure suit proved to be very effective protection for Weaver. In fact, once it was inflated, an emergency oxygen cylinder in the seat kit attached to the parachute harness was functioning. It not only supplied breathing oxygen, but also pressurized the suit, preventing Weaver’s blood from boiling at the extremely high altitude. In this way the suit’s pressurization had also provided physical protection from intense buffeting and g-forces. That inflated suit had become like a tiny escape capsule.

There is some interesting footage of wind blast testing on flight gear and seats for the F-106 aircraft you can find here. According to some of this data the helmet and flight suits were capable of surviving wind forces in and around Mach 1.3 and the seat was capable of ejecting at those speeds. However in the case of the F-106 line of aircraft it was ultimately deemed that 0-0 ejections were more likely (and a higher priority) than high altitude high speed ejections. Since no seats were capable of both ejections the 0-0 seats were ultimately favored. (check out this for more info)

Not the answer you're looking for? Browse other questions tagged safety supersonic or ask your own question.

14
Are there any known incidents of ejections by capsule? What are the survival chances?