After reviewing discussions and vector diagrams of gliders in flight, the vertical lift component and the vertical drag components seem to produce a steady state, 0 acceleration balance with gravity. The glider is on a straight line flight towards the ground. Would the forward motion of the glider be accounted for by combining the horizontal lift vector and gravity? Would any other forces be involved? 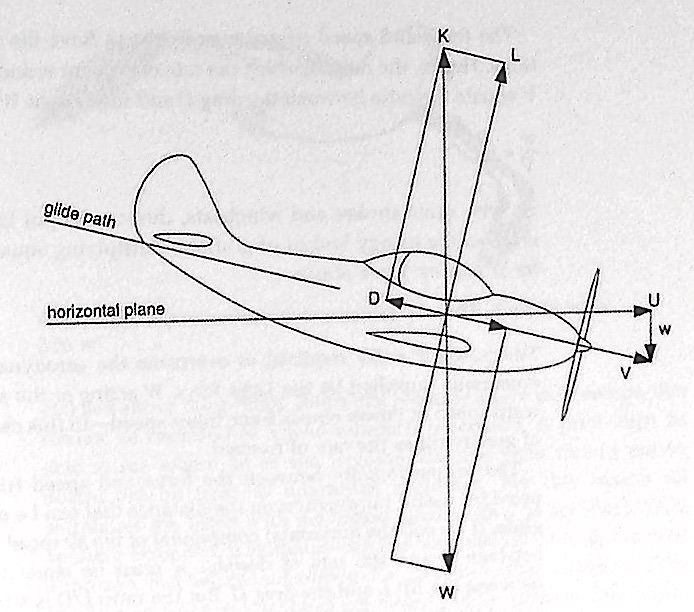 V is the airspeed. U and w are the horizontal and vertical components of V. The rest of the vectors are forces; W = weight, K = aerodynamic force, L & D are the orthogonal components of K. Those are all the forces involved in a glide.

"What produces Thrust along the line of flight in a glider?" Nothing. There is no Thrust involved in gliding flight. Lift, Drag, and Weight form a closed vector triangle, meaning net force is zero, meaning no acceleration or deceleration is taking place. The Weight vector can be resolved into components perpendicular and parallel to the Drag vector, but noting that Weight has a component that is parallel to Drag is not the same as saying that a Thrust force exists. 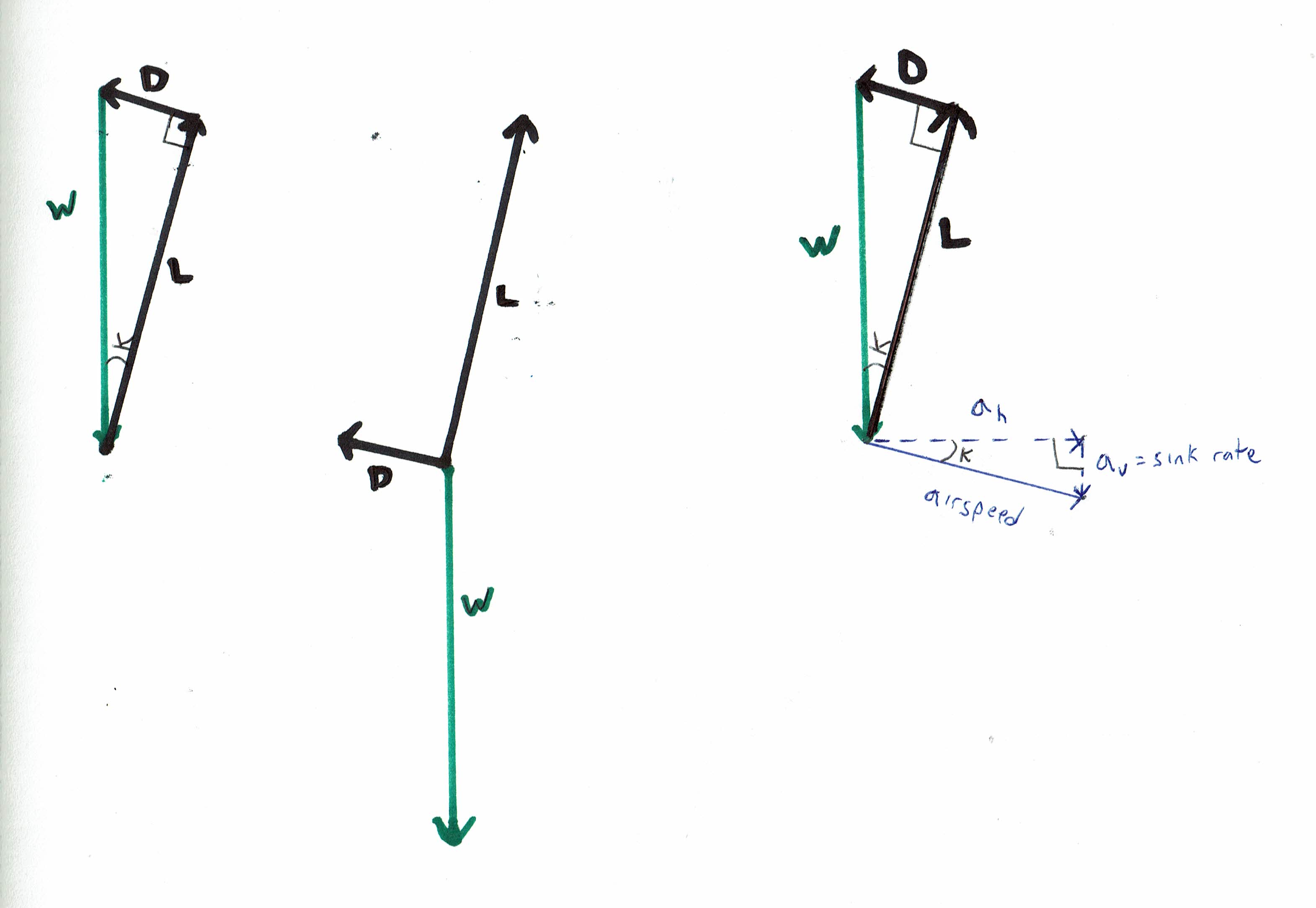 All three of the above vector diagrams represent the exact same physical situation. We've represented the aerodynamic forces in black, and the gravitational force-- the weight vector-- in green. The left-hand and right-hand diagrams are easier to understand than the middle diagram, because the force vectors are arranged into a closed polygon (a triangle in this case), which shows us instantly that the net force is zero. On the right-hand diagram, we've also included the airspeed vector, and its horizontal and vertical components. Note that K is the glide angle, and note that on the right-hand diagram, the triangle formed by the force vectors and the triangle formed by the airspeed vectors are similar triangles. The right-hand diagram makes it immediately obvious why the ratio of Lift to Drag, is also equal to the glide ratio through still air-- i.e.the ratio of horizontal speed to vertical speed (sink rate). Note that for high L/D ratios, Lift is very nearly as large as Weight, and horizontal speed is very nearly as large as airspeed, so for most practical purposes we can use airspeed / sink rate, glide ratio, and L/D interchangeably.

It is crucial to understand that the above vector diagrams will be valid for flight at some given particular angle-of-attack of the wing REGARDLESS of whether the airmass is rising, sinking, or neither. A glider doesn't feel any difference in the direction and magnitude of the forces acting on it when rising in a powerful mountain wave, than when gliding in still air.

Note also that we're only dealing with the wings-level case. In circling flight, the forces still look the same in a side view, but airspeed and lift and drag are all higher than in wings-level flight at the same angle-of-attack, and the glide ratio is decreased, and from a head-on view we'd see that the part of the lift vector has been diverted to the side.

Back to the simple case of wings-level flight--

What is "powering" the glider?

In a steady state with no acceleration nothing needs to produce a forward force. Inertia indicates that all forces are equal. This is true whether climbing, descending or maintaining constant altitude.

That given, there will always be a drag force trying to slow the glider along its flight path. To remain at a steady airspeed it is only this drag force that must be overcome. Since a glider produces no thrust, drag must be compensated by angling the flight path downward causing a portion of gravity to counter the drag force. If you divide gravity into x and y coordinates referenced to the flight path it is the portion that is parallel to the flight path that is countering the drag.

This is all presuming no updraft.

It might be easier for you to understand this from an energy balance standpoint, as follows: The vertical descent rate in feet per second of a glider times its weight yields the energy release rate (foot-pounds per second) being dissipated by drag forces as it descends. Dividing the energy release rate by 550 yields the horsepower required to maintain the glider in its glide. This energy is being dissipated by a drag force applied to the airframe; that force times the airspeed yields the drag horsepower. In a steady-state glide, the descent horsepower equals the drag horsepower.

What creates force U? We know the glider is descending vertically at a constant velocity. We know the wing is pitched down at an angle. How does this translate into a horizontal velocity component? As the "wind" from the vertical descent strikes bottom of the wing, some of the energy will move it sideways!

Notice a perfectly circular parachute will drop straight down. With a sinking glider, the horizontal stabilizer will push the nose down, creating an angled surface to the wind. This is how gravity (the fuel) uses the wing (the engine) to create forward thrust (Force U).

In the steady state, the flight path would be the result of forward and vertical velocities (U and w).

Comments would be most welcome.

What do we have? Forces out of balance. The vertical lift vector Lv is smaller than W. Lh is unopposed. There for, the point must accelerate down and to the side. What will stop the acceleration, drag from velocity. I realize this is long hand compared with Quiet's analysis, but it solves by (more realisticly) dividing drag into vertical and horizontal components while keeping gravity vector down and accounting for direction of flight V.

Not the answer you're looking for? Browse other questions tagged general-aviation or ask your own question.

17
Does lift equal weight in a climb?
28
Is excess lift or excess power needed for a climb?
14
How does an aircraft descend without its nose pointing down?
3
How can an airplane keep going forward if it has no thrust?
3
Is lift force less than weight during a descent?
3
Are we changing the angle of attack by changing the pitch of an aircraft?
-2
What is the purpose of the propeller?
5
'Gravitational' power vs. engine power
3
Descending on a given glide slope (e.g. ILS) at a given airspeed— is the size of the lift vector different in headwind versus tailwind?

14
What are the effects of different seasons on flight training?
12
What does ATC do when a VFR flight in the mode C veil has a malfunctioning altitude encoder or transponder?
10
What to do with excess fuel before flight?
9
What are the US flight planning regulations for an alternate airport?
3
What is the significance of a clover-shaped flight track?
8
Is the low air pressure on top of the wing the major contributor to lift?
5
What happens if I cross the ADIZ line without a flight plan and no clearance or contact with ATC?
3
What are the implications to consider when starting a university Flight Club?
5
In the US, is it customary to tip the line personnel?
3
What is the flight trajectory of a commercial airplane in regards to altitude v/s distance?