What is the available range for DME, and why do we need EFC?

How far from the station can a DME signal be picked up, and why do we need EFC?

How can DME signal go from the station?

If you are asking what the maximum distance between the station (e.g. Vortac/VOR/DME, etc.) and the DME equipped airplane can be for a reliable DME signal, it's 199 NM (slant range). Of course this depends on aircraft altitude and a few other variables.

See this excerpt from the Aeronautical Information Manual for more information: 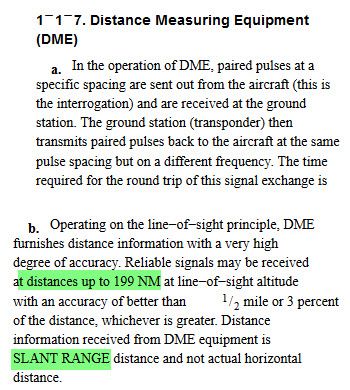 why do we need EFC?

If you are flying IFR and are given holding instructions (for example) you will be given an EFC time by ATC. This is given to you in case of lost communications. If you loose communications with ATC you are expected to continue with your originally planned, revised, or route/approach you were told to expect by ATC at your EFC time.

There are other occasions that you may receive an EFC from ATC. For example, you may be taken off of a previously assigned route, and ATC might say (for example) "N12345 turn right heading 230, vector for traffic, expect direct to Omaha in five miles." If you lost communications with ATC, then five miles from the point of the vector you should go direct to Omaha.

Since your question was not entirely clear regarding EFC, I included 3 different occasions that your might receive an "Expect Further Clearance" from ATC.

As a note, the actual ATC phraseology (generally speaking) where the 3 words "Expect Further Clearance" would be spoken would apply to a routing, or holding clearance (or a short term clearance to a fix/clearance limit other than an airport, with or without holding instructions). But the word "Expect," when used with regard to a route or altitude (such as "Expect Flight Level 350 in four minutes" or "Expect" direct to Omaha in five miles" is implied to be an "Expect Further Clearance." (EFC)

Finally, as noted above, EFC is directly associated with lost communication with ATC. If you read the Federal Aviation Regulations, (FAR 91.185) you will have a better understanding of how the "Expect Further Clearance" procedures apply.

Not the answer you're looking for? Browse other questions tagged dme or ask your own question.

4
Are there benefits in training instrument students how to fly a DME arc?
0
Do UAVs use ground-based navaids?
7
How does an airborne DME unit differentiate itself?
4
Why don't aircraft have DME that can automatically convert the slant range to ground range?
2
What does it mean to "lock on" to a DME ground station?
1
How is DME station ident coded in ARINC 429?
1
How does a VOR or a VORDME affect the coding decision between CF or IF-TF respectively?
11
How can the A320 receive 3 DME signals if it has only 2 DME receivers?