Does shrouding a propeller minimize induced drag by equalizing the downwash velocity along its blades?

The vortex around an unshrouded propeller:

At first I thought the wall somehow increases the effective wingspan, moving the vorticies to the top of the wall much like winglets do and thus reducing the induced drag that way 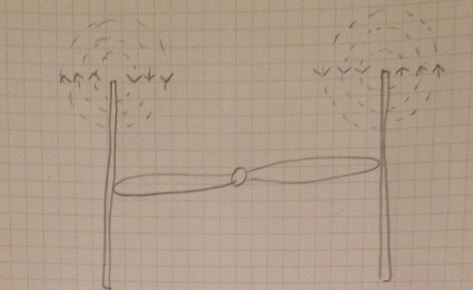 However unlike winglets the walls don't have a pressure difference on either side (it's not an airfoil) therefore the vortex can't be there. 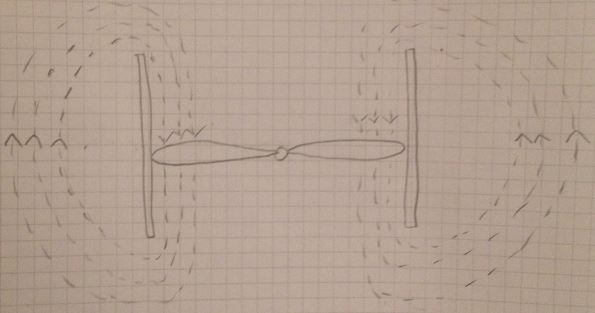 But this doesn't change the effective wingspan so why does it have less induced drag?

My explanation is that the existence of the wall causes the inside of the vortex to "straighten out" with the flow through the duct which makes the downwash velocity constant along the length of the blades (since the flow is irrotational). This means that this condition is satisfied:

Therefore induced drag is minimized. Is this correct?

Basically, yes. The difference between shrouded and unshrouded propeller is that the shrouded one can produce uniform thrust across the diameter, while for the unshrouded one the thrust decreases near the tips.

That way a shrouded propeller accelerates more air than an unshrouded one of the same diameter. This air therefore needs to be accelerated to lower speed, and therefore carries away less kinetic energy, requiring less induced power¹.

However, diameter can be varied, so the efficiency comparison is not that straightforward. When the propeller spins relatively slowly, making it larger is better, similarly to how increasing wing span is better, aerodynamically, than adding winglets.

¹ In propellers and rotors it is called induced power rather than induced drag, because it counts directly against the engine power. It also describes the physics better, since in both cases it is the work that is done on the air by the reaction to the generated lift/thrust.

I suppose the confusion may be due to different sources using different definitions of induced drag. As used most commonly in my experience induced drag is the energy wasted as non-useful work in the creation of turbulence directly attributable to the generation of lift. Most noticeably in the wingtip vortex. In other words imparting flow in directions other than the ideal direction; in keeping with the photo-quote, an infinitely long completely uniform wing would have on lateral pressure gradient and thus no sidewards flow, nor the vortex formed from sideways flow.(It is not the vortex that causes drag, the vortex is just a symptom of the lateral pressure gradient.)

A close shroud, possibly even attached to propeller tips, of sufficient width will stop these vortex. However it may not stop all lateral flow because of the helical flow of the propwash. The helical flow can be reduced with static blades much like those used in axial flow compressors on gas-turbine engines. The shroud does increase add parasitic and form drag but it most definitely does reduce induced drag.

The first drawing in the Question with the un-shrouded prop, has the wrong perspective or axis so the vortex is in the wrong spacial plane; the second drawing has the vortex flowing through a solid wall and the prop again has the wrong axis. The third drawing is not a vortex it is the bulk flow encountered with a stationary fan in an enclosed room.(and the prop has the wrong rotational axis)

No, the vortices are trapped in the tip clearance.

What if there's no "outside" at all to your setup? Imagine a theoretical scenario where the entire space outside the duct is solid to $\infty$. Where are the vortices now? They could only be within the tip clearance.

I just realized this paper from another question is the perfect answer to this question.

And your assumption of shroud somehow making the downwash uniform is also wrong. Note that although the drawing in the statement of the problem or this paper is for a two-blade shrouded fan, even a fan with a very high solidity factor, e.g. 0.8~0.9, as used in high bypass-ratio turbofans, does not equalize fan wake, and that equalization happens only due to shear friction between the infinitesimal pockets of air themselves. 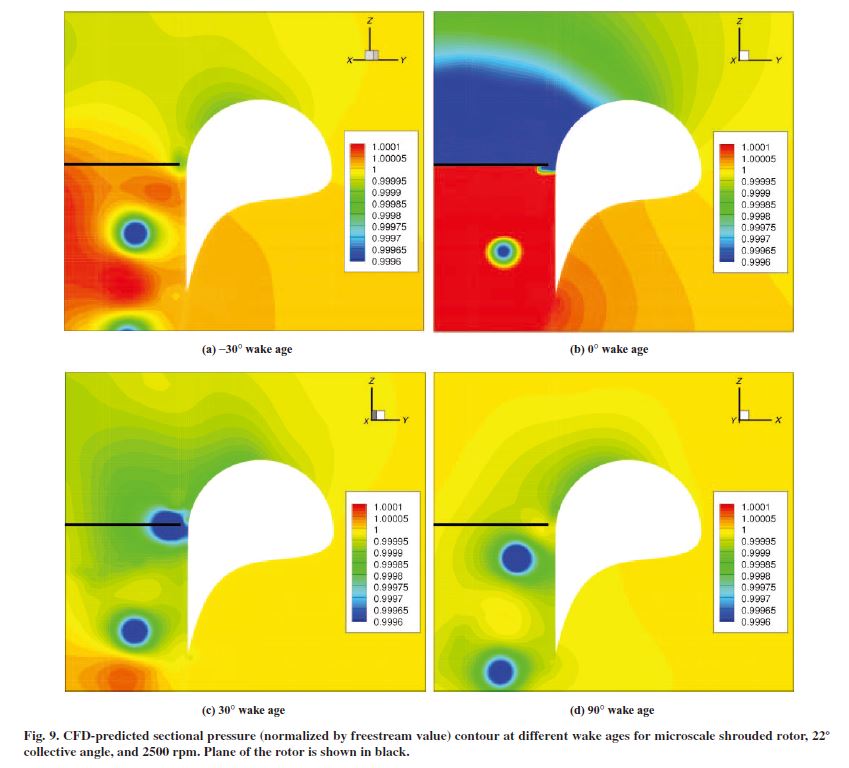 Found this CFD of a turbofan's fan. 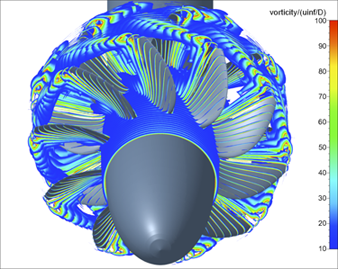 Not the answer you're looking for? Browse other questions tagged aerodynamics propeller efficiency fluid-mechanics wing-tip-vortex or ask your own question.