What are the "parts" of a SID procedure?

In the ARINC 424 (downloadable from this link), the following information about SIDs procedures is given in the section 5.7 Route Type (RT TYPE): 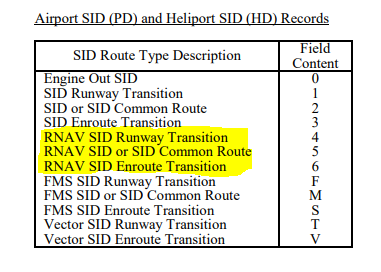 As you can see, it appears to me that a procedure is formed by three parts. My questions are the following:

I hope my questions even make sense.

Your questions are broad-based, but Order 8260.46F should provide the answers you are looking for.

Here are two figures from Order 8260.46F. These figures are accompanied by descriptive text and illustrate the type of information in the Order which should be responsive to your questions: 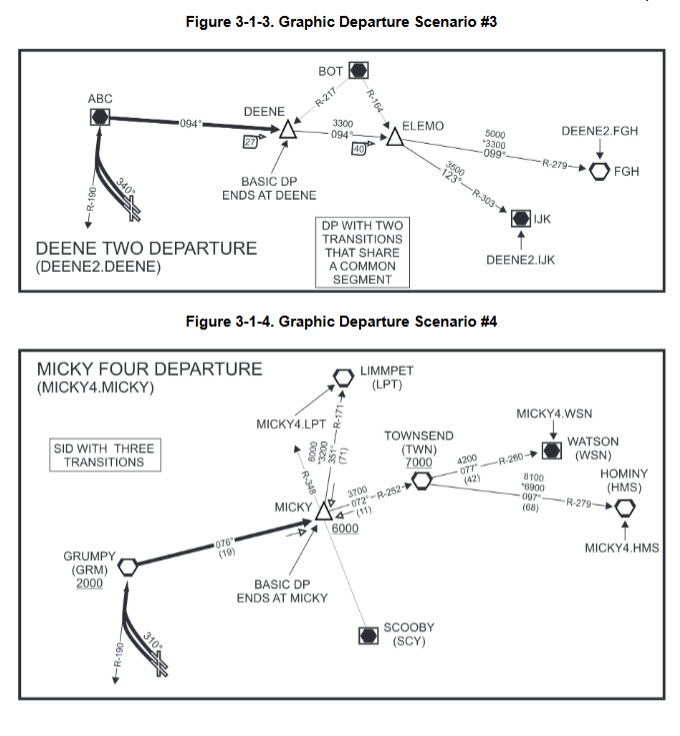 You asked the question in terms of ARINC 424 which imposes the constraints of the database structure and use. So I'll try to explain SIDs within that constraint and in the broader sense. The reason for that is that ARINC 424 exists to support the use of an FMS (or an RNAV navigator). But some SIDs don't require an FMS to fly them. The ones that start with "SID" or Vector". FMS SIDs require and FMS (but not necessarily a modern RNAV capable FMS). RNAV SIDs require an RNAV system with the database because they use RNAV waypoints that only exist within the database. A modern RNAV FMS can use any of the SIDs.

For the more generic description of SIDs, I refer to the Instrument Procedures Handbook (FAA-H-8083-16B).

Enroute transition fixes are fixes that exist in the SID and in the enroute system structure (e.g., on the Low Altitude IFR charts).

So back to what you are seeing in ARINC 424. Each of the SID routes is coded in the database starting with the Runway Transition, followed by the waypoints that define the Route and ending at the Enroute Transition.

Since SIDs can cover many environments

What the FMS does with what you entered is to start the plan from a fix on the selected runway with a 'takeoff' leg, typically a FA leg (fix to an altitude) to 400 feet AGL. The FMS then 'strings' in the SID with a leg to the runway transition followed by legs to each of the fixes in the SID route until it reaches the enroute transition. While it does this it adds the altitude constraints to each of the fixes along the route. The enroute portion of the flight plan is then added.

You'll note that "Vector" SIDs only list a Runway Transition and an Enroute Transition as the route will be provided by ATC as vectors. The FMS loads these two waypoints separated by a DISCO (disconnect). It will sequence the runway transition after takeoff and then do nothing while the pilot follows the ATC vectors. When told by ATC, the pilot can clear the DISCO by entering a Direct-To leg to the Enroute Transition fix.

Below is the EPKEE RNAV departure from Denver International with the different sections labeled. 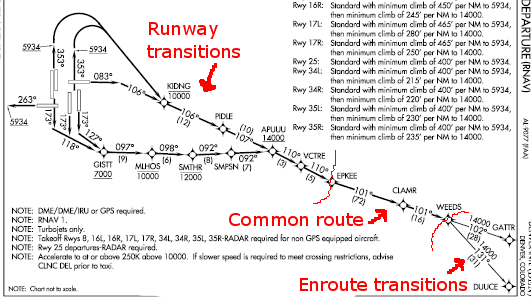 Even though multiple runways share some sections of the runway transition, they all end at EPKEE. The procedure for Runway 25 tells pilots to expect radar vectors rather than having a defined route.

After WEEDS aircraft can choose the GATTR or DUUCE transitions, or some other waypoint, to begin the enroute section of their flight plan. The enroute transitions are also listed on the chart after the runway transitions.

Not the answer you're looking for? Browse other questions tagged instrument-procedures sid-star rnav arinc-424 or ask your own question.

4
Is the Common Route, either of a SID or a STAR, related to the Runway Transition (climb phase) or the Enroute Transition (enroute phase)?

3
Can SID/STAR have shortened names?
4
Are 'climb via a SID' instructions actually used in the US?
3
What is the purpose of the hold at JNC on the Grand Junction Seven SID?
3
Are rhumb lines ever used as leg paths for RNP/RNAV?
1
How do designers determine the altitude profiles of neighboring procedures for deconfliction purposes?
0
Is there a manual which describes the algorithmic procedure on which the Vertical Navigation Guidance is based?
7
Why would there be two RNAV waypoints co-located with a VOR?