As a plane goes higher, the engines have to work harder to compensate for the air density, therefore it will require more fuel in order to provide the same power at lower altitudes.

How can that be the case?

Flying higher means less drag because the air is thinner; therefore, you can fly faster at altitude and hence travel farther on less fuel.

There is a special altitude at which these two effects (drag reduction and available power reduction) achieve a crossover point. This is called the critical altitude and it is there where you achieve optimum cruise and best economy.

If you want to fly higher than critical altitude, you will fly slower because the power loss is greater than the drag reduction and you will spend more time in the air.

Adding to the answer by Niels Nielsen, the special altitude changes (increases) during the flight as the power required reduces as the weight of the aircraft decreases due to fuel consumption. But these effects also depend on the type of propulsion (jet vs propeller). Basically, for propeller aircraft the plot should be power required and for jet aircraft it should be drag. Now, you draw a line tangent to the curve going through the origin. The point where the two lines meet is the optimal velocity for maximum range. Power required will shift down and to the left for decreasing weight and up and to the right for increasing altitude. The drag curve will approximately translate to the right for increasing altitude. 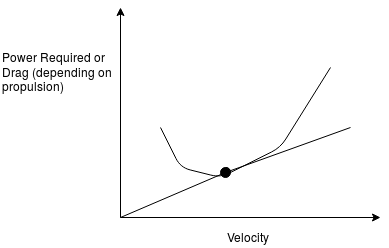 The approximate analytical equation for range is given by the Breguet equation:

$\eta_j$ is the propeller efficiency and $c_P$ and $c_T$ are the specific fuel consumptions, which remain approximately constant regardless of airspeed and altitude changes (relative to cruise altitude). But it does decrease with altitude. Propellers are also less effective at high altitude and also have a sweet spot similar to jet engines. Moreover, the required lift should be equal to the weight for a given time instant, which is given by: $L = W = C_L\frac{1}{2}\rho V^2 S$ where $\rho$ is the air density and S is the wing surface area.

Now to maintain the condition for maximum range and fly at a constant $\frac{C_L}{C_D}$ either the air density must decrease or the velocity must decrease. Decreasing the velocity is not preferred since the aircraft will fly slower and slower meaning longer flights. This flight profile is often referred to as cruise-climb flight.

A great book that treats a lot of these types of aircraft performance considerations is:

This is a good question but first we must clarify something.

The long definitive answer involves a great deal of physics, another subject we will not get to rhetorical about at this time. We will however consider Bernoulli’s principles concerning fluids and the airfoil or wing. This brings us to our first thought; consider the atmosphere, or air, around us as a fluid. Now that was simple enough.

When an airplane takes flight it must defeat its greatest foe, Newton’s contribution to this question, gravity. In its most simple terms, the ability to defeat gravity requires an opposing force that is greater than the weight of the mass being lifted. In aviation this comes from the lift created, of course, by the wings.

To help make this possible on airplanes the wings are shaped with a leading edge, that is the part that first hits the air, then a highly rounded upper surface, known as camber, and much flatter lower surface which come together at the trailing edge. (Just a moment more, I’m getting to your answer.) Now we apply Bernoulli’s principal.

Looking at air as a fluid, in principle Bernoulli’s theory is this. The air traveling over the top of the wing is moving at a faster speed than the air traveling under the wing. In theory, this would cause greater pressure under the wing (lift) and less pressure over the wing as the air is rushing from the leading edge to the trailing edge. The reasoning here is that when the air molecules are separated by the leading edge of the wing, the molecules passing over the top, which has a longer surface due to the added camber, must move faster in order to reach the trailing edge at the same moment as the air passing below the wing. Now we get to the part concerning thicker (heavier) air mass and thinner (lighter) air mass and the effects on “lift”.

In order to for the wings to produce the lift needed to defeat gravity you must have thrust and lots of it! Now we enter into the power (engines) production that is required to create flight. As we all know, an airplane must be moving into the air mass in order to obtain the effects required to produce flight also known as the lighter than air effect. So in principle, the shortened version, the air passing over and under the wings must produce a lift equivalency greater than the weight of the aircraft. There is a formula but we’ll skip that here and just state this, the airmass flowing around the wings must be equal to or greater than the mass of the airplane. There, we have flight... well sort of.

You see the weight of air at sea level is much greater than the air at say 30,000 feet. Here again, in principle, the amount of air flowing across the wing on takeoff, by mass, is more at mean sea level than it would be at 5,000 feet. Since this is a principle of mass verses mass (in this case in order to defeat the effects of gravity), the fluid principles of Bernoulli’s would apply well here. So what are the effects on engine performance?

Modern power plants today are engineered to direct less airflow through the engine or turbine section of the power plant. The ratios have changed dramatically in the last decade with most engines diverting 80% or more of the air flow around the core and exiting as additional thrust at the tail. These engines, as one could imagine, consume extreme amounts of air as it flows through and around the core, or power unit, and exits the tail as super heated energy and thrust. To maintain this thrust the amount of air mass must remain fairly constant. So, how is this accomplished at 38,000 feet? And what about the thinner air passing over the airfoils?

Well, here is where physics and the dynamics of air mass come into play but in a much simpler way than you might expect. Remember the role that the wing plays in all of this? Air pressures above and below the wings can still be easily maintained at higher altitudes. Why? Because of the much greater amount of air passing over the wing surfaces at speeds often over 500 mph. You see, it’s the air molecules that hold the secret to air mass and density. At speeds like this the air density is super compressed to allow far more lift than needed to maintain flight. Then there is the engine question.

Since air is composed of gasses (mainly nitrogen with about 20% oxygen and other gasses mixed in) at the molecular level, they too can be “squeezed” under tremendous pressure and therefore compressed to create an even mixture through a jet engine. This ability to compress huge amounts of air while flying at high altitudes again makes up for loss of mass and density. Since the engine is moving between 500 and 600 mph, the intake or ingesting of plenty of air through the core and surround is no problem.

The added bonus is this; thin air creates less friction on the aircraft and much cooler air temperatures (normally around -60 degrees) as the air flows through the engine. There is also a slight reduction in fuel cost flying at these higher altitudes as we normally reduce our throttles 10 to 20 percent while at cruising altitude. This of course is dependent on the aircraft type and any head or tail wind!

Not the answer you're looking for? Browse other questions tagged engine fuel or ask your own question.

9
Are tripropellant jet engines a viable way to increase fuel efficiency for large commercial airplanes?
24
Why are piston engines for aircraft rarely diesel powered?
14
Why does fuel consumption decrease with increasing aircraft altitude?
21
Why are all engines identical in typical commercial airplanes?
5
Is this test question correct about the causes of detonation?