Is there a tank priority sequence for using the fuel tanks?

Is there a tank priority sequence for using the fuel tanks, or does the pilot decide?

Which fuel tanks are used in order of priority in aircraft?

Is there a sequence of priority?

Yes, and if you don't observe the fuel burn schedule you risk exceeding the structural limitations of the aircraft, and in particular wing bending moments.

Or the pilot decides?

No, the pilot does not decide usually. While there may be some leeway in the fuel burn schedules of large aircraft, the pilot or a flight engineer (old aircraft) or an automated system does not decide but rather implements a preset protocol.

As an example, here's a general outline of the fuel burn schedule for 747-100/200 aircraft. This is from memory so might not be entirely correct but is sufficiently so for example purposes:

Be aware that just as there is a fuel burn schedule, there may also be a fuel loading schedule. In the 747-100/200 that schedule dictated that no fuel goes into the center tank until all other tanks are full. As I remember, the largest center tank available held 114999 lbs of fuel at 6.7 lbs/gal fuel density. Center tank size varied as ordered by the airline and changed through the production run of the aircraft.

Some light aircraft, e.g. Cessna 310, 402, etc., may have auxiliary fuel tanks in addition to main tanks that are designed to be used in accordance with procedures in the aircraft's flight manual/pilot operating handbook.

My G35 Bonanza (and many other, older aircraft) used a pressure carburetor that would return excess fuel to the left main fuel cell.

This meant that no matter what fuel cell the engine was consuming fuel from, the carburetor would always be sending the fuel it did not feed to the intake manifold back to that particular fuel cell.

If the left main fuel cell were full of fuel, the returned fuel from the carburetor would be vented overboard.

As others have already alluded, this really depends on the aircraft. Your question does not specifically state fixed wing - so here is my $.02

I know from flying Robinson model helicopters, specifically the R22 and R44, the main and auxiliary fuel tanks are actually tied together - you burn from both at all times; there is only a master shutoff, there is no tank selector. 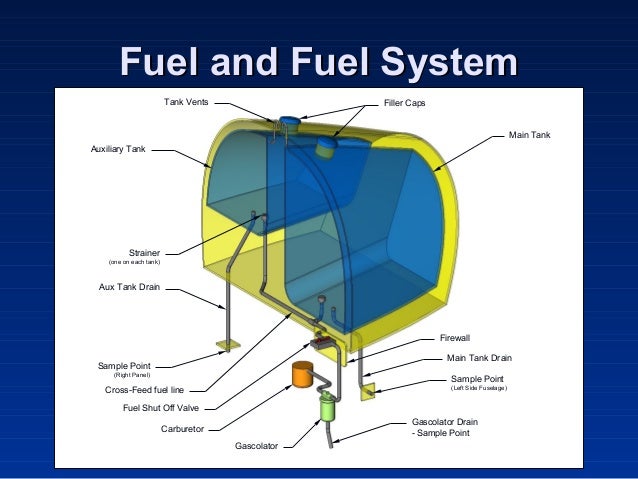 Yes there is often a prescribed sequence. Sometimes it has to do with wing bending moments; often it has to do with the fore-and-aft location of the CG. For example my understanding is that the P-51D (and C?) Mustangs were rather unpleasant to fly while the aftmost tank was full of fuel, so some fuel from that tank would typically be consumed even before using any fuel from the drop tanks.

And sometimes it just has to do with the plumbing of the fuel system. For example if only tank A is directly connected to the engine, you wouldn't want to forget to transfer some fuel from tank B to tank A before tank A runs dry. Sometimes one tank feeds more reliably than others due to where the boost pump is located so it is wise (and prescribed in the manual) to use that tank for take-off. Etc.

Not the answer you're looking for? Browse other questions tagged fuel-tanks fuel-systems aircraft-operations or ask your own question.

4
How prevalent are anti-explosion bladders in fuel tanks?
13
Was there a design flaw in the fuel tanks of the MiG-15/17/19/21?
10
Why would the outer tanks fuel on the A320 be colder than the inner tanks?
3
Is fuel in trim tank usable?
6
How is fuel drawn from drop tanks in WW2 airplanes?
0
What extra components does a fuel tank have?