Why did the Daimler-Benz DB 605 compression ratio vary between cylinder banks?

The Daimler-Benz DB 605 was an inverted V12. The compression ratio of the 2 banks varied slightly. Why did the designers do this? 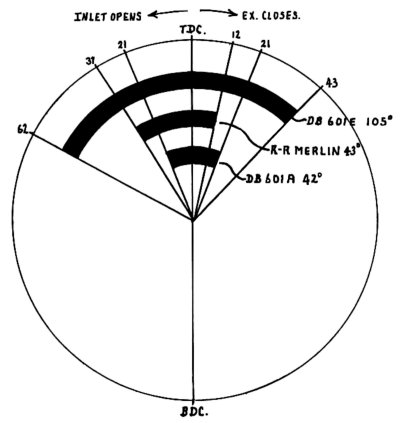 The 605 (601E above) used a "wild" valve timing. This valve overlap would start letting in the air/fuel mixture, while the exhaust valve was still open. So the intake would help push out the exhaust. This hurts the low RPM performance, so a special low-speed intake was also added.*

This overlap, the rotation direction, the compressor (supercharger) being closer to the left bank, are some of the reasons that resulted in the right bank having a lower compression ratio than the left. This affected the 603 and 605, but not the 601 because it didn't have such a wild timing overlap.**

But isn't compression ratio constant due to the fixed volume (a reply to a comment):

No, dynamic compression ratio is a thing that is affected by valve timing. An example (not 605 related) is given as:

However: intake valve closure (sealing the cylinder) always takes place after BDC (bottom dead centre), which may cause some of the intake charge to be compressed backwards out of the cylinder by the rising piston at very low speeds (...)

** ww2aircraft.net (translated from another link)

17
Why did the manifold pressure gauge on the Ki-61 have negative values?
4
Where to find information on the Daimler-Benz 606/610?
18
Why did the turbojet replace the piston engine?
5
Is this test question correct about the causes of detonation?
7
Why does enriching the mixture ratio beyond stoichiometry give more power?
11
Why do carburetors tend to produce richer mixture at higher altitude?
9
Causes of High CHTs
5
Why weren’t large, high-power radial engines built to take advantage of the Meredith effect?
2
Why am I getting unusually high CHT on ground operations on one engine in a Seneca II?
16
Can the plane Celera 500L be eight times more fuel efficient than a jet of similar size and capacity?