How does the line of thrust affect longitudinal stability?

I’ve been studying Pilots Handbook of Aeronautical Knowledge FAA-H-8083-25B and on p 5-17 they talk about thrust line and stability. Can someone explain why the moment changes when thrust is applied?

Power or thrust can also have a destabilizing effect in that an increase of power may tend to make the nose rise. The aircraft designer can offset this by establishing a “high thrust line” wherein the line of thrust passes above the CG. [Figures 5-26 and 5-27] In this case, as power or thrust is increased a moment is produced to counteract the down load on the tail. On the other hand, a very “low thrust line” would tend to add to the nose-up effect of the horizontal tail surface. Conclusion: with CG forward of the CL and with an aerodynamic tail-down force, the aircraft usually tries to return to a safe flying attitude. 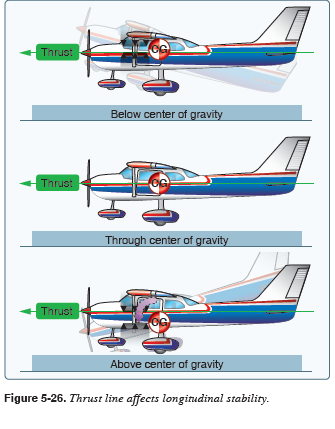 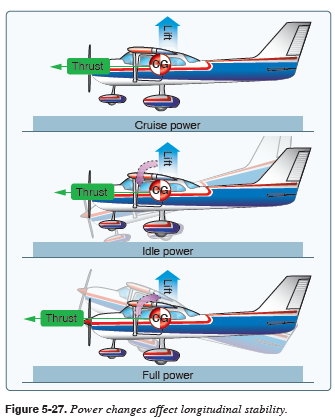 There is a general rule: don't trust "Pilot's Handbooks" when they talk about aerodynamics. More often than not, they are full of misconceptions and, at best, oversimplifications. In your quote, for example, the conclusion has nothing to do with the preceding text.

But the question is fair. Thrust line can affect stability, but we need to define what exactly we understand by that.

Stability as such is a negative reaction to a disturbance: a disturbance of a particular defined kind must cause a reaction which negates the original disturbance. Usually, we restrict the analysis to relatively small disturbances, when reactions are more or less linear.

Longitudinal stability, in a broad sense, describes any longitudinal motion. For airplanes this involves pitch or speed. (Altitude is a different axis and even a different frame, although we'll need to consider it in some cases). These are linked but different motions, and we can talk about them separately to some extent. It just happens that for most airplanes, the characteristic times of these angular vs linear motion is so different that we can very well analyse them independently. The heavier the airplane (and/or higher its wing loading), the better it holds. Even for GA airplanes it's still largely true.

In a strict sense, when aircraft designers (but not pilots) talk about "longitudinal stability", they mean the short-period pitch stability, or more accurately, angle of attack (AoA) stability. This means that when AoA is disturbed (by a gust or control input), a moment immediately arises that counteracts this AoA change (which is done via pitch change).

The mechanism behind AoA stability involves purely aerodynamic moments/forces. (The explanation involves the concepts of neutral point and moment derivatives). Notably, it does not involve thrust nor airspeed. Both of them change too slowly compared to AoA/pitch and so play practically no role in longitudinal stability per se.

But when it comes to airspeed stability, with which pilots are more intuitively familiar, the situation is different. Airspeed stability is linked to AoA stability via an indirect mechanism that Robert already roughly described in his answer: "increased thrust, increased speed, increased lift, plane rises vertically, vertical "up" pushes tail down, pitch changes". The important result is that a statically stable (read: AoA stable) aircraft will also be stable in speed. But even that holds only if drag doesn't grow faster than lift; that is, on the front side of the power curve. (Pilots know it very well). At high (but pre-stall) AoAs, the airplane will remain stable in AoA but will become unstable by speed.

Technically, this is still speed stability, not thrust stability. We are not concerned how airspeed changed: thrust, gust, dive, whatever. A statically stable airplane will try to pitch up and climb as a response to increased airspeed, slowing down as a result.

But when we analyse speed changes as a specific result of thrust changes, other factors come into play. Namely, apart from speed, changing thrust can disturb the moment balance of the airplane. In general, multiple effects can be important here, not only the location of line of thrust with respect to CG, but also with respect to 'centre of drag'; and the changed slipstream may cause aerodynamic changes. Either way, it may happen that these extra moments may augment or negate the natural tendency that comes from AoA stability.

For simplicity, let's analyse a few obvious cases of reaction to increased thrust (leaving everything else unchanged, particularly trim).

Figure 5-26 is good example of the result of applying a torque (F x lever arm) around the center of gravity. The effect is the same as applying aerodynamic torque, you get rotation. This is why an engine mounted "through" the CG will not have this effect. It should be noted that drag effects are ignored in this question, so we may consider 5-26 as the result of a CHANGE in THRUST.

The thrust line is actually balanced with center of frontal drag. Literature probably should be worded as such. The concept that all thrust torques rotate around the CG may be better defined as the net thrust/drag torque.

Thrust line interacts proportionally with tail down force as velocity increases (from more thrust), which is why nose down thrust angle is built into engine mount to increase pitch stability. We also may be learning that "positive static stability" (setting CG forward/down force on tail) may not be needed if directional stability is adequate, and may in fact introduce unwanted pitch up tendencies that require a larger tail to correct (or more trimming).

Figure 5-27 applies torque to the CG, indirectly, as follows: increased thrust, increased speed, increased lift, plane rises vertically, vertical "up" pushes tail down, pitch changes. Opposite for reducing thrust. This particular example has cruise (power and trim) as no effect. So we may consider 5-27 as a result in a CHANGE in AIRSPEED, resulting from change in thrust.

Fortunately, the manufacturer, through experience, will mount the engine (usually a few degrees down, and a little right) to offset these effects as well as left turning tendency.

In practice, one counter-acts these effects with the elevator, and re-trims once the speed desired by changing the throttle is reached.

For new pilots, one might think using your elevator also has an effect on your longitudinal stability too, but no, please do not worry about this.

Minor changes in throttle, as in setting up a landing, do not cause noticeable changes in pitch.

You have two different questions.

Can someone explain why the moment changes when thrust is applied?

The graph below illustrates the forces from a propulsor and its relative location to the airplane CG. As illustrated, the thrust line is below the CG. Therefore, as power is increased, more thrust is generated, and you get a nose-up moment.

How does the line of thrust affect longitudinal stability?

This is a much more interesting question. The explanation below may be a little dry.

Longitudinal stability, by the letter of the law, is defined by whether increasing elevator control force is needed to change and maintain an airspeed, and whether the aircraft returns to the same airspeed with elevator released. From an engineering perspective, it can be expressed as a single criterion (see Ch.6.5, Etkins, Dynamics of Flight):

Now let's look at the pitching moment contribution from a propulsor ($C_{m_p}$):

where $C_T$ is the thrust coefficient, $\bar{c}$ is the reference chord length, $T$ is thrust, $\rho$ is air density, $V$ is airspeed, $S$ is reference area, $z_p$ is the thrust line offset as shown in the picture above.

To keep matter simple, I'm going to assume that:

With a straightforward differentiation with respect to $C_L$, we get:

Not the answer you're looking for? Browse other questions tagged aerodynamics thrust faa-knowledge-test or ask your own question.

0
Does the stability of a mass change if the center of gravity is above or below the point of thrust?
11
Does static longitudinal stability require download on the tail?

0
Which moments are acting on a flying airplane?
1
How does angle of incidence affect an aircraft's stability?
3
On a ducted propeller, how does duct length affect thrust?
1
How does engine geometry affect flight stability?
0
How does landing gear affect thrust on a light twin-engine airplane?
6
How does the ground effect affects longitudinal stability?
1
Why weren’t large, high-power radial engines built to take advantage of the Meredith effect?