Is there an abnormal condition that could have caused this fatal accident involving a stall?

In 2009, a Grob 103 glider stalled and crashed at Richmond Field, Michigan, killing the passenger but not the pilot. (NTSB accident report: CEN09LA353)

The accident occurred after a failed winch launch; during the winch launch, the tow cable broke while the glider was about 400 feet AGL. The pilot correctly decided to turn around and return to the airport.

Here's what happened next, according to a statement the pilot later gave:

I could feel in the controls that something was not right and the glider was not responding in the manner that I am accustomed. There were none of the signs of a stall and the glider did not behave like it has any time that I have practiced stalls. Before I could determine the cause or take any action, the nose abruptly dropped and we dove toward the intended runway.

The NTSB report about the accident states that the probable cause of the accident was simply the pilot's failure to maintain adequate airspeed, resulting in a stall. Judging by this, the NTSB didn't seem to put much stock in the pilot's report that "something was not right".

Suppose that we take the pilot at their word, however. Is there any type of abnormal condition that might have caused a "feeling in the controls that something is not right", and which could cause the nose to drop with "none of the signs of a stall" occurring beforehand?

Possibly a Center of Gravity beyond the aft limit could do it, but with 2 adults on board I don't think that's likely unless the person up front was really small and the PIC failed to load ballast to bring the front seat weight up to the minimum. The NTSB report doesn't say anything about loading so that seems to be a non-issue and there were no other anomalies with the airplane that they could find. Possibly really bad bug contamination on the leading edges could also affect the stall behaviour and maybe that could've been a factor the investigator overlooked. Pretty unusual to see gliders with bugs allowed to accumulate that badly, however.

One of the problems with winch launches is when a cable breaks at 400 ft like that, you are in the worst possible place to be, directly over the middle of the runway. There is no way to get aligned with a runway to land without a fair bit of maneuvering and turning, and you're high enough that landing more directly toward an off-airport field is out of the question, since 400 feet is a lot of altitude to play with in a 35:1 glider, so psychologically the tendency is to be hell bent on landing on the grass directly below you one way or another. With that kind of unpleasant surprise with the stress level dialed up, it's likely the pilot simply did not perceive the pre-stall behaviour while concentrating on getting lined up.

In gliders the pre-stall cues can be fairly subtle by power plane standards, obvious enough during deliberate practice but easy to miss when mentally loaded up with a life and death do-it-now task. So if I was going to bet a large sum of money on a likely cause, I'd go with the pilot stalling and spinning an otherwise normal glider from failure to maintain flying speed while maneuvering, regardless of what his recollection is.

Suppose that we take the pilot at their word, however. Is there any type of abnormal condition that might have caused a "feeling in the controls that something is not right", and which could cause the nose to drop with "none of the signs of a stall" occurring beforehand?

A couple of thoughts: 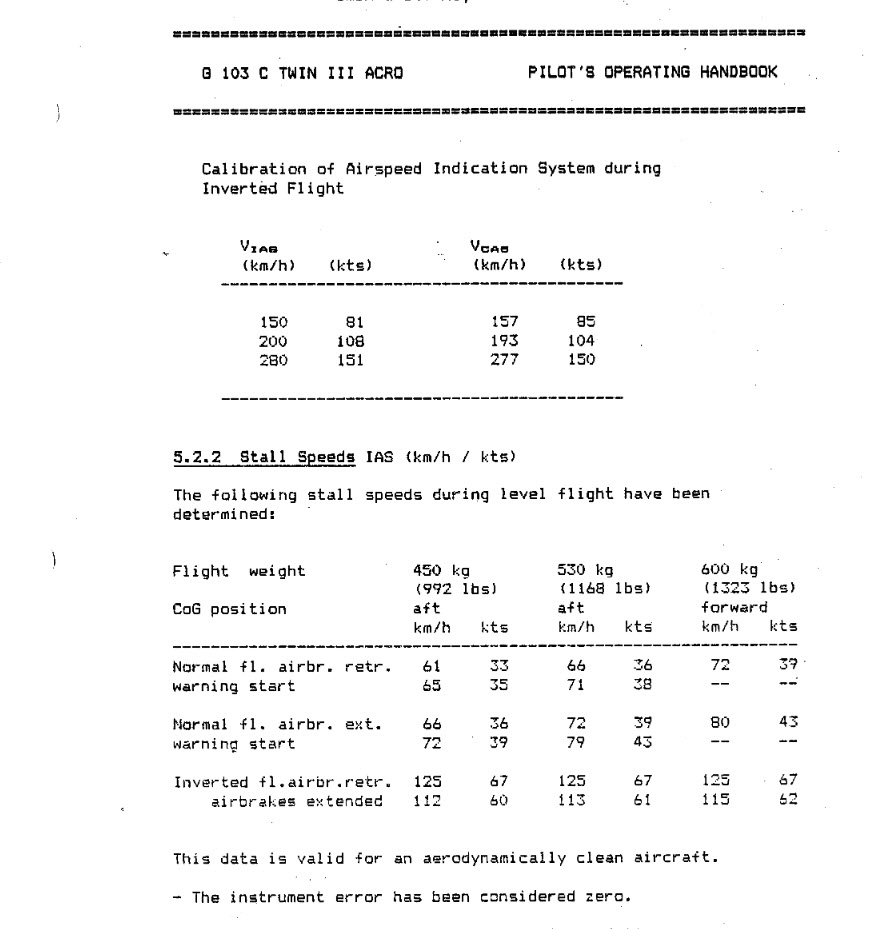 The flight manual, section 4, indicates that with aft cg there is a stall warning 2-3 kts before reaching stall speed - (read) "There is a tail vibration which increases with continuing pull on the control stick." I think the note above (highlighted in yellow) means that with forward CoG, at max weight, there is no stall warning at all, i.e., the glider just stalls (nose drops without warning). I could be wrong, but this seems to me to be what the note means.

Here is a copy of the manual for the Grob G103 Twin III Acro: Grob G103 flight Manual

Here is a copy of the NTSB report I believe covers this accident: Grob 103 Accident - NTSB Identification: CEN09LA353

Not the answer you're looking for? Browse other questions tagged accidents glider stall sailplane or ask your own question.

35
Why would a Cessna 182T not enter a stall?
11
Is the stall speed different at -1G?
13
How should a glider pilot signal turns to the towplane?
2
Could atmospheric effects cause a PA-30 to break up?
7
Which incidents did not result in accidents because of the actions of the second pilot on board?
7
Will a stalled aircraft fall down like a brick? Or how steep does the Lift-AoA curve fall off after stall?
1
Would it be possible to use a magnetron beneath glider plane to generate its own thermals?
2
Would the benign spiral maneuver be one alternative to dealing with being “stuck above” or inside a cloud?