Would it be possible to weaken the wake vortices generated by a large aircraft (which can be dangerous to smaller aircraft behind the large aircraft, and are the limiting factor determining how closely aircraft can be safely spaced in the air) by shaping the tips of its wings so that the lift generated (and, thus, the amount of air deflected downwards) by the outermost portion of the wing drops off gradually to zero, instead of abruptly transitioning at the wingtip from “lots of lift, lots of downward-deflected air” to “no lift, no downward deflection of air”?

Diagram of what I’ve got in mind: 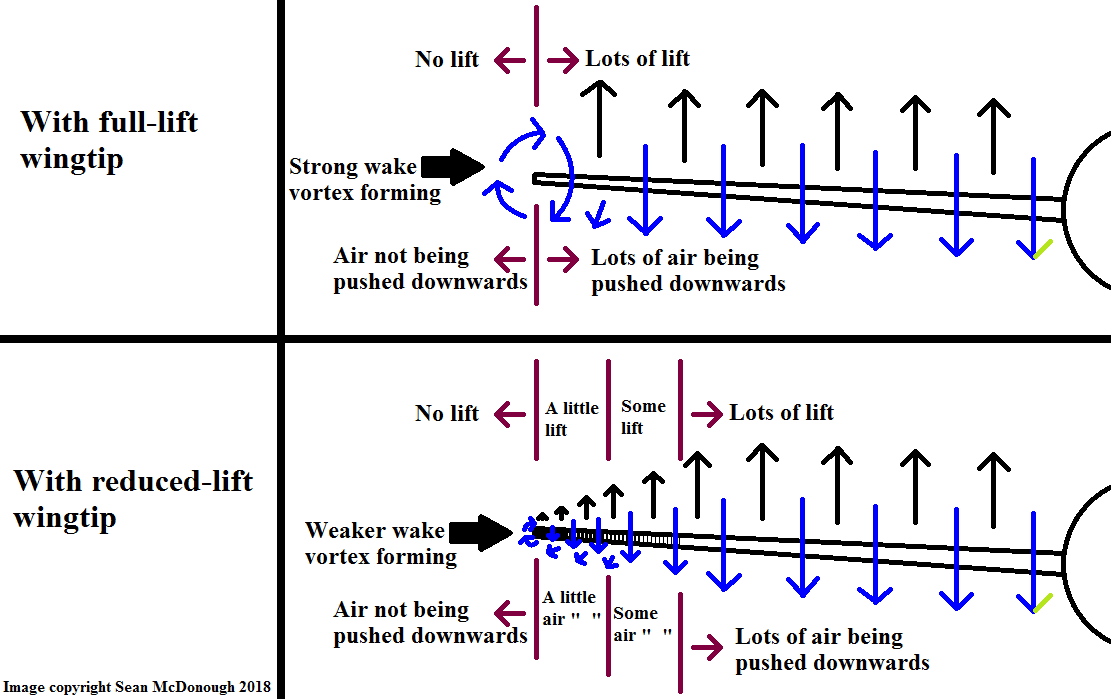 This would come with a slight efficiency penalty (equivalent to slightly decreasing the length of the wing), but could still be useful in some situations despite this (such as high-frequency operations by a mix of heavy and less-heavy aircraft in heavily-congested airspace, or large numbers of takeoffs and landings by both heavy and light aircraft on closely-spaced parallel runways), and the reduction in lift generated by the wingtip would offset some of this penalty by reducing the upwards bending force on the outer portions of the wing (and thereby reducing the amount of material needed for stiffening this part of the wing).

Lift already does taper off gradually towards the tips, even on rectangular wings without any washout. That effect becomes stronger with tapered wings, of course. The reason is the pressure equalization resulting from flow around the wingtips, like you show in the lower picture. And like in that picture, the wake is spread over span in reality. Your upper picture is unrealistic and a gross oversimplification.

However, the eventual strength of the wing wake will be little affected by this. The resulting vortices are caused by wake rollup and do not come directly from the tips. The tip vortices are only a small part of the overall wake.

Regarding efficiency: Tapering lift towards the tips will make the wing more efficient. Lift far away from the wing root causes high root bending moments and requires a heavier structure. Lift near the root costs less structural weight and the net lift of the wing (lift minus wing weight) will be higher with a near-triangular lift distribution. This insight was published as early as 1933 by Ludwig Prandtl and rediscovered by R. T. Jones in 1950.

I have seen a string (roughly 6" long) attached to the trailing edge of a wingtip spin in the opposite direction to what we would normally expect. The aircraft had a great deal of washout and was flying at a high speed (low angle-of-attack). The wings were supported by upper and low wires running out to midspan, and the lower wires were slack and the upper wires were loaded-- clearly the bending load at the root was not in the direction we normally expect. Undoubtedly though, at some distance further behind the aircraft, a pair of wake vortices did exist, spinning in the normal direction, despite the fact that the areas near the wingtips were clearly creating downward lift. This isn't as relevant an answer as the one already posted but it does bear on your question to some extent.

Not the answer you're looking for? Browse other questions tagged aircraft-design aerodynamics wing wake-turbulence or ask your own question.

38
How does an aircraft form wake turbulence?
9
How to recognize the horizontal winglet in the Horten design, or the experimental glider in this video?
5
Can RVSM safely be further reduced?
4
Where does upward momentum come from in leading edge vortex?
3
How and why do wake vortices come together to form two tip vortices?
1
Can Bell-lift distribution increase glider efficiency(L/D)?
0
Do wingtip vortices cause a decrease in the lift component of aerodynamic force, and do planes need to pull more AoA to compensate?

4
What type of commercial aircrafts generate strong Wake Turbulence?
6
What trade-offs are being made in the design of the planform alignment of stealth aircraft?
12
Why do the outer parts of wings generate less lift?
3
Can lift be equated to how much air is moved?
7
Why does the A320’s maximum allowable aileron deflection decrease, rather than increase, when the flaps are extended?
14
What are the pros and cons of wingtip tanks?
0
How do anhedral and dihedral affect the efficiency of a wing?
3
How does downwash affect angle of attack?
1
How heavy are modern cantilever monoplane wings?
0
Does the nacelle strut experience reaction forces due to lift, drag, thrust, weight of engine during cruise flight?