Does the 2020 ADS-B -Out requirement apply to aircraft with only a wind-driven generator (electrical system)?

Since my J3 Cub was was not originally certificated with an engine-driven electrical system it's clear the 2020 ADS-B-Out mandate (U.S.) does not apply (except where specifically noted in FAR part 91).

If I install a wind-driven generator providing a limited electrical system for my J3, will I now be required to comply with the ADS-B Out 2020 regulations?

Part 91 is mostly clear on the subject:

§91.225 Automatic Dependent Surveillance-Broadcast (ADS-B) Out equipment and use.

(a) After January 1, 2020, and unless otherwise authorized by ATC, no person may operate an aircraft in Class A airspace unless the aircraft has equipment installed that—

(b) After January 1, 2020, and unless otherwise authorized by ATC, no person may operate an aircraft below 18,000 feet MSL and in airspace described in paragraph (d) of this section unless the aircraft has equipment installed that—

(c) Operators with equipment installed with an approved deviation under §21.618 of this chapter also are in compliance with this section.

If you have this deviation, you're good.

(d) After January 1, 2020, and unless otherwise authorized by ATC, no person may operate an aircraft in the following airspace unless the aircraft has equipment installed that meets the requirements in paragraph (b) of this section:

(2) Except as provided for in paragraph (e) of this section, within 30 nautical miles of an airport listed in appendix D, section 1 to this part from the surface upward to 10,000 feet MSL;

(3) Above the ceiling and within the lateral boundaries of a Class B or Class C airspace area designated for an airport upward to 10,000 feet MSL;

(4) Except as provided in paragraph (e) of this section, Class E airspace within the 48 contiguous states and the District of Columbia at and above 10,000 feet MSL, excluding the airspace at and below 2,500 feet above the surface; and

(5) Class E airspace at and above 3,000 feet MSL over the Gulf of Mexico from the coastline of the United States out to 12 nautical miles.

That's all airspace where ADS-B is required. A summary is shown in the following graphic: 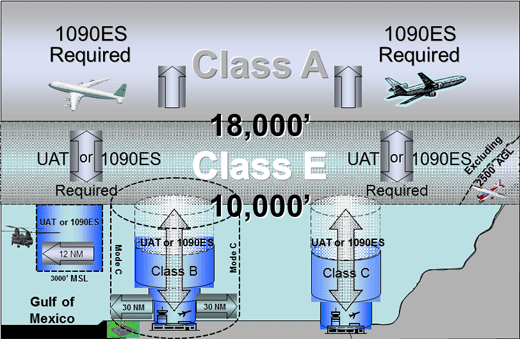 (e) The requirements of paragraph (b) of this section do not apply to any aircraft that was not originally certificated with an electrical system, or that has not subsequently been certified with such a system installed, including balloons and gliders. These aircraft may conduct operations without ADS-B Out in the airspace specified in paragraphs (d)(2) and (d)(4) of this section. Operations authorized by this section must be conducted—

That specifies which aircraft have an exception (with following detail on specifically what airspace they can operate in.) It has, however caused confusion as the wording is very similar to Part 91.215(b)(3) which specifies "an engine-driven electrical system" as opposed to "an electrical system".

Subsequently the FAA has published a Legal interpretation that clarifies the intent was not to create a more stringent requirement for ADS-B Out than for transponders; specifically from the interpretation:

As such, we have concluded that the same aircraft excluded from the transponder requirement are excluded from the ADS-B Out equipage. Accordingly, an aircraft that subsequently has been installed with batteries or an electric starter would not be required to equip for ADS-B Out.

So it appears that your J3 is exempt and would remain so unless you installed an engine-driven electrical system.

Mostly it affects airplanes with transponders operating in airspace that requires a transponder.

This question appears to be asking if adding a wind-driven electrical system will change where you may fly your J3 Cub without ADS-B-out. No it will not.

If you are interested to know what additional airspace is now off-limits to your J3 Cub lacking engine-driven-electrical system, transponder, and ADS-B-out, that was open to you before the 2020 ADS-B-out regulations came into effect, see this related answer. In short, it is the airspace that lies directly above the ceiling of Class B and Class C airspace in the 48 contiguous states (including Washington D.C.) that is also above 10,000' MSL, as well as the Class E airspace at and above 3,000 feet MSL over the Gulf of Mexico from the coastline of the United States out to 12 nautical miles.

At least, that is clearly the original intent of the FAR. However, the FAR is rather poorly written, and arguably prone to mis-interpretation. This related question asks whether the FAA is interpreting FAR 91.225 in a more expansive way that would ban aircraft without engine-driven-electrical systems and without ADS-B-out from more airspace than noted above-- namely, from all airspace above 10,000' MSL over the contiguous 48 states and Washington D.C. (excluding airspace below 2500' AGL). It appears that the answer to that question is "no".

Not the answer you're looking for? Browse other questions tagged faa-regulations aircraft-systems electrical-system ads-b equipment or ask your own question.

14
Will a portable ADS-B unit, like Stratus, meet the requirements for my aircraft to be ADS-B equipped by the 2020 mandate?
5
Is there any reason to have ADS-B out that is not based on GPS?
3
How does the Piper Archer III electrical system work?
0
FAR 91.215-- may an aircraft with no electrical system and no transponder overfly Wheeler AAF at 9500' MSL?
1
FAR 91.215 (b)(3)(ii) -- transponders-- does the "or below 10,000' MSL" clause have any practical significance?
3
Why do the DC-9’s three-phase electrical systems use separate, unconnected breakers for each phase?
0
Does the FAA construe FAR 91.225 to prohibit aircraft w/o electrical systems w/o ADS-B-out from flying above 10,000' MSL unless below 2500' AGL?
4
Would "Mad" Mike Hughes' steam-powered rocket have been certified airworthy by the FAA?
25
Can a person be operating an aircraft in a "Careless" and "Reckless" manner at the same time? Or are these two different standards?