Carrier VTOL takeoff or not?

In this picture, shown in a recent news article, a "shooter" seems to be giving a "go forward" command to what I believe is a Lockheed-Martin F-35 aircraft already prepped in a VTOL configuration. But since VTOL's take off and land vertically, under what circumstances would a shooter give the pilot this "go forward" command? 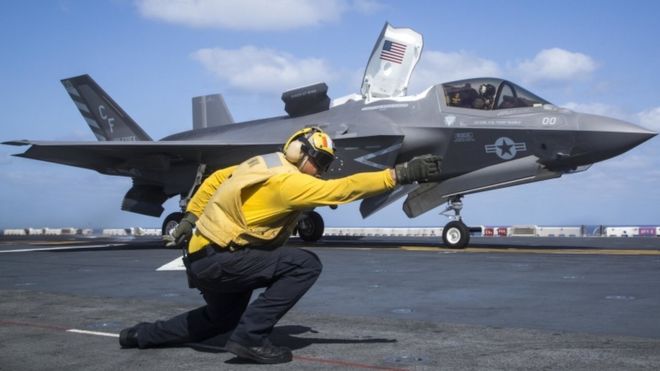 The rolling takeoff is a STOVL or Short Takeoff and Vertical Landing operation. The F-35B is too heavy to hover with full fuel and a warload, but can use its vertical lift system to augment lift generated by the wings allowing an F-35B to lift off in less than 500ft ground roll with a Vr of around 70 knots or so. The procedure is also used by Harriers flying off assault ships as well. Some carriers likes the Royal Navy’s HMS Queen Elizabeth make use of a ‘ski jump’ to augment the takeoff roll and launch the aircraft upwards, allowing for a greater launch load and/or shorter takeoff roll.

Once the warload and at least 60% of the total fuel capacity has been depleted, the F-35B can enter into a full hover and land vertically. This allows the F-35B to recover on an assault ship without the use of arresting gear.

An additional variant of the F-35, the F-35C, has a larger wing and tailplane, different landing gear and an arrestor hook in the tail. This allows it to launch and recover aboard larger CATOBAR aircraft carriers, but cannot do so aboard assault ships like the F-35B can.

The pointing signal by the launch officer is the takeoff signal. It can be used as instructions to fire the catapult/EMALS or for the pilot to release brakes and make a short takeoff, as in this case.

They usully don't take off vertically, but use a rolling takeoff instead. They accelerate forward before going up, as this generate lift using the wings plus the engine allowing a higher load of fuel and payload.

According to this chart from the Navy the signal officer may simply be giving the generic takeoff signal (or at least completing it).

The F-35 is capable of doing traditional catapult launches as well as VTOL takeoffs but there were some deck heat related issues with the VTOL takeoffs.

Not the answer you're looking for? Browse other questions tagged aircraft-carrier vtol or ask your own question.

26
Why is landing on a carrier not handled by a computer?
21
Why is the landing area of an aircraft carrier angled to port side, not starboard?
8
Can carrier-based aircraft takeoff while the carrier is stationary?
14
How can an aircraft not fall into the sea after the arresting cable snaps during a carrier landing?
5
How to calculate lift and drag coeffecients for VTOL aircraft in the takeoff stage?
3
Does the Lilium VTOL wings produces lift during takeoff?
3
Why does the US Marine Corps fly the Harrier, a VTOL or operationally STOVL aircraft?
5
Straight vs. angled aircraft carrier decks: tradeoffs for rolling takeoff?