Why aren't there any widebody propliners for the high-density short-haul markets?

Jetliners come in both narrowbody (one aisle) and widebody (two or more aisles) versions, but all propliners, to the best of my knowledge, are narrowbody aircraft.

Now, granted, one of the big reasons for having widebody airliners is to have an aircraft big enough to cross continents and/or oceans with a profitable passenger load, and trans[continental/oceanic] routes are (at least in civil aviation) exclusively the province of jets, because speed.

However, in places with lots and lots of huge, densely-populated cities packed fairly closely together, such as much of East Asia, passenger numbers are so high as to require the use of large widebodies even on very short-haul routes - and, on short-haul flights, propliners hold a considerable advantage over jets (jets are horribly inefficient in the dense air at low altitudes, and short-haul flights aren't long enough for an airplane to have time to climb to long-haul cruising altitudes, whereas propeller aircraft, with their lower speeds, and, thus, lower drag, do just fine going low, and short-haul flights are short enough that slower aircraft aren't a major disadvantage; this is why, even though propliners are essentially extinct in long-haul airliner service, they continue to take a large chunk of the short-haul market). A widebody propliner would be perfectly-suited for these sorts of jam-packed short-haul markets.

So why aren't there any?

Not enough thrust (i.e., too many engines)

So we are looking at 8 propellers for an A310-sized wide-body, or 4 contra-rotating propellers, already 6 too many either way for the airlines.

A comment claims that a turboprop engine can be designed as big as needed, what's missing is that the bigger the torque, the more blades are needed, which will essentially turn a prop into a fan. A relevant post is, 'How does a fan differ from a propeller?', where Peter Kämpf compares the disc loading of propellers and fans.

Propellers driven by piston engines are the most efficient, followed by turboprops, but they don't have the thrust of jet engines. Try and picture how many propellers would be needed to lift a Boeing 747. In the commuter/regional range of 100 passengers, turboprops have great efficiency, but go bigger, and fewer engines win.

On paper all is possible, the issue is making a civilian product that makes sense, in this case, number of engines. (Airlines care about the bottom line, the military not so.)

More parts is higher maintenance cost. For turboprops some figures are in this AOPA table from Oct 2016 (variable cost that incl. maintenance):

So capacity has little impact on the variable cost, unlike the number of engines.

Comparing 4x extreme-end turboprop engines with contra-rotating propellers (8 propellers in total like on the An-22 that's been suggested in a comment), with say 2x GE CF6 jet engines (like on the lightest wide-body airliner), when it comes to only "B", is a different question that requires context:

The reason why the Bear is turboprop powered (same engine as the aforementioned An-22), is because it's a long-range bomber with loitering in mind, not a short-range wide-body airliner as asked. Turboprops were also considered for the B-52.

The A400M was suggested as a plane that makes it possible, it doesn't. Its MTOW minus OEW minus Fuel is 15 tonnes, or 115 pax + luggage and no cargo. Also note it's only 4 m wide internally, narrower than the narrowest wide-body, the 767 at 4.72 m. This is confirmed by its max troop capacity of 116, design-wise because most of its length is to accommodate a ramp.

Ignoring all that, it's still got 2 engines that the airlines can do without. 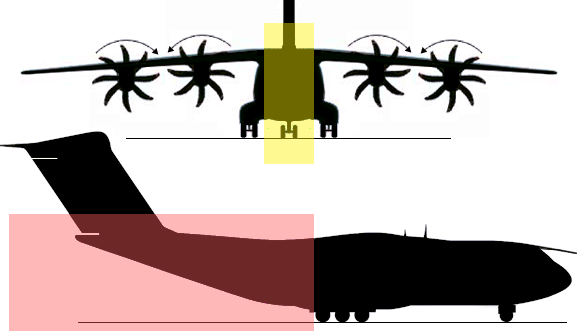 Build it lighter (composites): In the history of airliners, whenever progress was made toward lighter materials, wings are built bigger for more efficiency, and so is the cabin, because the airlines want more passengers for the same MTOW, otherwise they can't stay afloat. A prime example is the 787, it uses lighter materials, and ended up heavier than the plane it replaced, because its efficiency comes in part from the bigger wings.

Regarding the noise, military turboprops (and jets) are very noisy, but when it comes to passenger transports, turboprops match the jets. This research for example compared the noise level in the cockpits (one of the loudest parts of a plane) of similar-sized planes (A319 and Dash 8), and the turboprop was the quietest.

Prop driven aircraft have much louder cabins than turbofan driven aircraft. Prop noise is directional, and the passenger cabin adjacent the blades is the most noisy position. Cockpit noise measurement is not representative.

The A400m has a fuselage diameter equivalent to the a330 and a gross weight similar to a 767, contrary to claims of a narrowbody cabin width measured to accomodate nine foot tall trucks. The AN22 has a maximum takeoff weight of 550klb, heavier than any a330. Both of these are currently flying turboprop widebody class aircraft; neither of these can carry passengers without hearing protection.

The A400m requires noise deadening treatment to even get to safe industrial levels of sound, let alone something that a passenger would be willing to endure. The AN22 is beyond ridiculously loud. Turboprop aircraft are aimed at short haul as passengers won't put up with the noise for more than a hour or two.

Any aircraft developed for long haul use needs to be quiet, and this is where widebodies aim. In the few situations where it is economical to use widebody aircraft for short haul routes (ie. Japan's 747D) a quiet widebody can be used with modest incremental cost. Conversely, a prop powered widebody could not be used on long haul with any conceivable current technology; passengers could not tolerate it.

Market demand does not justify the billions in development cost to create a short haul only widebody, especially given the ready availability of a substitute that passengers overwhelmingly prefer.

Not the answer you're looking for? Browse other questions tagged aircraft-design airliner turboprop or ask your own question.

0
Why are there no large turboprop passenger airliners?
27
Why are propeller engines uncommon on airliners?
33
How does a fan differ from a propeller?
6
What is the average weight difference between composite and metal airliners?