Why is the aiming point distance shorter in the US vs. Europe for long runways?

In essence, if you compare EGLL and KJFK (but it works for other airports too) you would see that US airports generally adhere to the rule of 1000 ft in distance between threshold and aiming point base. In Europe there usually is an additional (2nd) pair of TDZ zone markings which brings an additional 150 m to a total of 450 m between threshold and aiming point.

What is the source of this diversification and does it change how a pilot would handle final approach in two different settings? Lower flare/harder touchdowns in US?

For simplicity let’s assume we are comparing long (i.e., 3 km or more) runways only.

Good observation. It's often misquoted that the 1,000 feet is the [international] standard. The standards and recommendations for runway markings can be found in ICAO Annex 14. In particular section 5.2.6 for the touchdown zone marking (diagram shown below).

When a country decides it wants to deviate, it lists the differences in its AIP. In this case indeed the US AIP lists a difference from 5.2.6.4:

The U.S. standard places the aiming point marking 306 meters from the threshold where it replaces one of the pair of three stripe threshold markings. The 306 meters location is used regardless of runway length.

Where a PAPI system is provided for the runway, the beginning of the marking should be coincident with the visual approach slope origin.

The AP marker has always been (using Google Earth historic view) where the PAPI lights are at EGLL. Example for EGLL 27R:

I initially thought maybe it's because EGLL went through various lengths in its long history, but a new runway such as 05R at HECA that was built from scratch, is actually like EGLL 27R. There's more to PAPI than meets the eye.

So there is diversification indeed. As for 'landing short in the US', we are looking at ~100 m difference (306 vs. 400) for the aiming point, but don't forget the extra touchdown zone marking closer to the threshold in the ICAO standard. 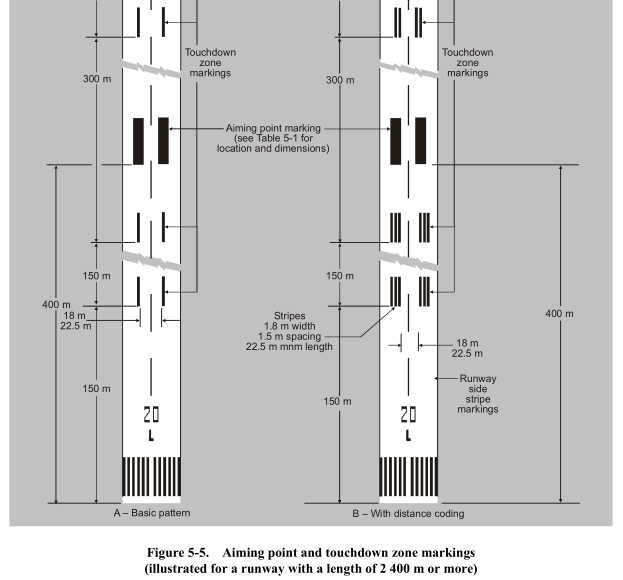 Note: the figures apply to runways that are >2,400 m. Shorter runways have the aiming point brought closer to the threshold.

Trivia: Also still in the UK AIP is the unique aiming point, even though they are clearly no longer used at EGLL and EGCC for example (check historic view in Google Earth or current charts).

25
What is this runway marking on Kirkwall Airport's runway?
6
Do different planes (category) aim differently in the 'final stages before flaring'?
0
Why is there conflicting nomenclature for the 1,000 ft runway markings?

20
What is the minimum distance allowed between two parallel runways?
12
What determines the touchdown zone and aiming point markings on a runway?
5
Why are magnetic headings used for designating runways?
7
What are runway Aiming Point markers used for?
12
Why five touchdown zone markings for only one aiming point?
0
How does the training for an EASA license from the US compare to that from Europe?
7
At what distance beyond the aiming point is a landing considered a "Deep Landing"?
1
Which countries in Europe allow for the use of Pilot-Controlled-Light?
9
Why is the landing distance increased on grass runways?