I'm not good with flying. However, on Wednesday morning I'm flying from Gatwick to Bergen, Norway, traveling alone with two young children.
I'm trying desperately to not show my kids how afraid I am of flying - with families in two countries we have to do this all the time. So I have to be mentally prepared for this: the forecast is showing high winds.
Around the time of take-off (10:50) it shows 16-18mps, SSW.

As far as I've been able to understand, this is at the limit of what a Boeing 737 can take?

Basically: Will we be safe? How can I know? Will it be bumpy? What will happen? Should we cancel? 😳

Firstly, your pilots will have access to much more detailed and real-time weather information than you can get. They want to get home safely as much as you do, and will not fly if it is not safe to do so.

If the wind is coming from straight ahead, there is no maximum limit, which is good as aircraft takeoff and land into the wind whenever possible. If the wind is coming from the side - known as a crosswind - the limit in a 737 is about 36 knots/19 mps (the specific number can vary but that's a guide). The reason for this limit is to avoid the winnd blowing the plane off the side of the runway. So if the wind is that strong, hopefully the runway faces into wind, otherwise your pilot may have to delay the takeoff until it calms a bit.

Once the aircraft lifts off the ground, the wind speed is irrelevant (except for navigation purposes). Imagine a fast flowing river. Placing your canoe into the river when it is at such speed is difficult, but once you are in the middle of the water it is smooth as silk. The transition from ground to cruising altitude is similar. The initial climb will probably be turbulent but the aircraft is built to sustain more than nature can throw at it. Once at altitude the wind speed will almost certainly be much more than 100 knots - but just like the fast flowing river, if you close your eyes it will feel nice and smooth.

You should only cancel your flights if you want to throw away your money. Otherwise just try to relax, and understand that many airline delays that you hear of are caused by a pilot choosing safety over schedule.

Short version: yes, the plane can take it

The 737 — or any other plane — will not take off unless the wind is within safe limits for the aircraft type.

Did you know that last year there was not even not one single airfare-paying passenger fatality? Keep this in mind for a while...

Now, you came here asking "Are these wind speeds within the safe limits of this aircraft type?" There are two answers to this: "Yes", or "No".

I want you to ponder the potential answer: "No, those wind speeds are not safe for the 737 to fly in, but they keep doing it anyway". Does that sound like a realistic answer to you? Do you honestly believe that this is the way flight operations are being conducted across the world? When reading it like this, I do not think that this is what you believe, am I right?

But let us toy with the idea for a while anyway. Assume this is true. What would that mean? Well if this was the case — that aircraft are permitted to take off in wind speeds they cannot really handle — you would be hearing about a lot more crashes than you do. Planes would be dropping to the ground left and right. It is inevitably so that — if the answer was that planes fly in winds they cannot handle — there would be more crashes.

But this is not something you hear about, because it does not happen: planes do not take off in winds they are not certified to be able to handle. Last year's record — with not a single fare-paying fatality — would not be possible if planes were allowed to take off into dangerous winds.

So it does not really matter what the weather prognosis says, because if — on the day of your travel — the winds are more than the plane can take, the flight will be cancelled.

This is not even mentioning the fact that the limits imposed on aircraft have a safety margin built into, so that even if winds do gust up a little bit more, the plane can still take it.

And if the weather at your destination has fouled up before you get there, well this is what the divert airport is for. The divert is a pre-planned backup airport that the flight can go to if things turn fouler than expected.

So in the end: yes, your plane will be able to take the winds that prevail on the day of your flight, guaranteed, because if there are worse winds than that, you will not be flying that day.

As you can see on google maps Gatwick's runways are aligned (like many in the UK due to our prevailing winds) roughly east-west. In actual fact the runways are numbered 08 & 26 relating to 080 and 260 degrees respectively.

A wind coming from the SSW, for arguments sake, blow at roughly 200 degrees. Aircraft take off into wind, so you will invariably depart from runway 26. There is therefore a 60 degree difference between take off and wind direction (not exactly, but for illustration sake.)

18 m/s in roughly 35 knots, and if the whole of that wind speed was at exactly 90 degrees to the runway it might be close to the maximum, but it's not, only 60/90 of it is the "crosswind" component. When you calculate the numbers you would have roughly

Which is not close to the maximum.

Bergen airport is roughly north-south, but I imagine the weather there will be considerably different and I'll forgo the same illustration as above - suffice it to say the Pilot will not fly outside of his own and his aircraft's abilities. They always have the ability to divert, to wait out bad weather, or to turn back.

Relax, flying is statistically the safest way to travel.

To give you a perspective of how safe commercial flying is, take a look at these two pictures: 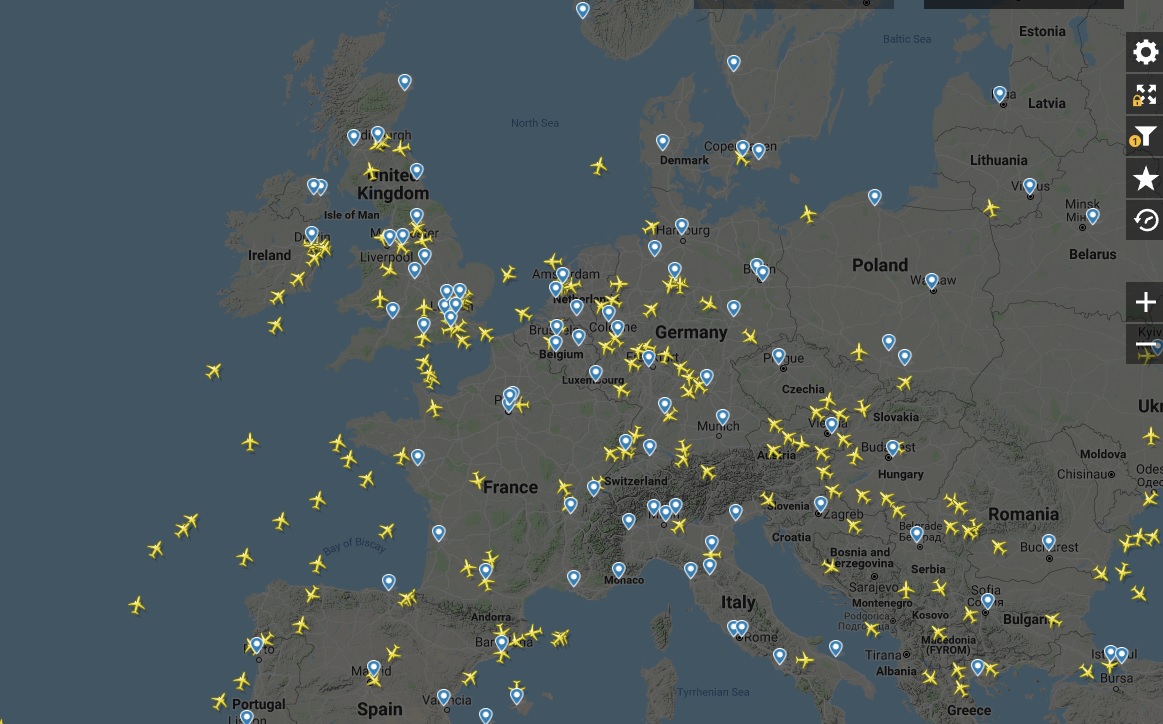 Those are the B737-800 that are in flight at the moment of typing this (which is around midnight in UK, so not the busiest time of the day!). If you bother to count, you'll see that there are 1375 of them. And this happens at all times, every day of the year, no matter what the wind is.

Please relax, as much as you can. The safety of your trip is the number one priority of the airline. As far as 'bumps' are concerned, there are always possibilities of them occurring, but there is no aeronautical reason to be concerned. Occasionally there are "bumps" in flight that will be uncomfortable, but very rarely injure the passengers belted in properly.

Have a good flight and I imagine the children will enjoy the experience for the first few minutes and then fall asleep.

A crosswind during takeoff is no big deal, as long as it's below the airplane's limits. The airplane starts off with all wheels solidly on the ground, which makes it easy to keep it pointed down the runway.

The demonstrated maximum crosswind for a 737-800 is either 33 or 36 knots, depending on the presence or absence of winglets on the wingtips. An 18 m/s (35 knot) SSW wind at Gatwick runway 26 works out to a crosswind component of around 29 knots, well below the limit.

Keep in mind that this is a demonstrated maximum: Boeing has shown that the airplane can always take off or land safely with a wind of this strength. The actual limit of what the plane can handle is higher (probably somewhere around 40 knots or so, given the sort of safety margins the airline industry favors).

What you're going to experience: the airplane will roll down the runway and take off, just like normal. Once you're off the ground, you'll feel a bit of bumpiness as the airplane climbs up through the surface turbulence layer. Once the wheels are up, the flaps are retracted, and you're a few hundred meters up, it should smooth out, and the flight will be no different from any other.

Prefix - I don't recommend you read the link to this source as it lists worst case scenario events (imagine you wanted to take up soccer and were researching the safety of the sport by searching for "worst ever soccer injuries", you would never take the usually very safe sport up, it is a terrible method for research).

Anyway, to summarize for you - from the list of incidents and accidents on the 737-800 type over the last 10 years, according to Wiki:

Many European airlines (EasyJet, Ryan Air, KLM) have 0% fatalities and have been operating for over 30 years with this type and others that are very similar.

I know I didn't directly answer your question about wind speeds, but that is because I do not need to and others have done so for you. It doesn't matter - the pilot will 100% not fly if he has even any idea that doing so will be unsafe.

Now, let's say that you are super unlucky, you are on one of the very, very, very rare flights that has an incident (let's say it's due to crosswinds, as you fear) - what is the likely outcome? A delay in your travels and a bump. 99% of all incidents involving jet aircraft do not involve fatalities.

If you do read through the incident list of any type, most of them will be hard landing, bird strikes etc. that usually involve emergency landings, with all of the passengers calmly leaving the aircraft with nothing more than a couple of bumps.

If none of this helped, take a fear of flying course - they are fantastic and will probably eliminate your fears.

Everyone has given you some great answers; including how runways work and how safety is a primary concern.

You should also know, in addition to all that has states, pilots often ask pilots of other aircraft that are flying in the same direction for condition reports. These are to make sure that any unexpected turbulence (a disturbance in the air) can be avoided.

Pilots will also often change and adjust their routes to avoid areas of turbulence; everyone prefers a smooth flight - especially the pilots.

Technology helps a lot, and weather radar is getting better constantly. However, it is still not perfect - which is why despite all the technology, advanced reports, weather analysis and precautions - pilots still rely on other pilots flying to give them an idea of what the actual air feels like for them, to avoid any unpleasant bumps.

So, you should rest assured that everything is working towards giving you a smooth ride.

Relax and enjoy your flight.

Not the answer you're looking for? Browse other questions tagged safety boeing-737 wind or ask your own question.