Why does a stall decrease lift, rather than increasing it?

A stall occurs when the angle of attack of a wing or other airfoil becomes so high that the airflow over the upper surface of the wing separates from the wing, rather than remaining attached to it; this causes the wing to produce less lift and more drag, making it harder to maintain level flight and more sluggish to respond to control inputs.

For a parcel of air to generate a lift force as it flows over the wing requires the wing to tip that air parcel's momentum vector downwards slightly; the reaction force that the wing experiences as it does this is what we measure as lift.

In the case where the airflow over the top of the wing separates from it, the parcels of air flowing by do not get their momentum vectors redirected downwards anymore and the wing hence "stops flying".

Meanwhile, the region of separated flow constitutes a zone of turbulent air which forms a stirred-up wake in the rear-facing "shadow" of the wing at its high angle of attack and the only work performed by the wing in this case is to stir up that wake- and that constitutes lots of drag.

Shouldn't the airflow separating from the wing's upper surface result in a large area of low pressure above the wing?

When a plane climbs it does so against the flow of air through the wing, and it changes altitude while crossing through different air pressures and air in different directions, hence airplanes slow down during lift (relatively).

You do forget to consider the air that resists the fuselage as well.

As @MichaelHall below mentions, A stall only occurs when the critical angle of attack is exceeded. This can occur in a climb, but it can also occur straight and level, in a turn, or while descending.

A Stall Generally means the plane's wings are getting reduced Air flow on them to maintain the stability in speeds. It can also occur when it climbs too steeply with the wing getting resisted more during lift. This is when the airplane loses lift or it loses the ability to maintain the plane on the air: 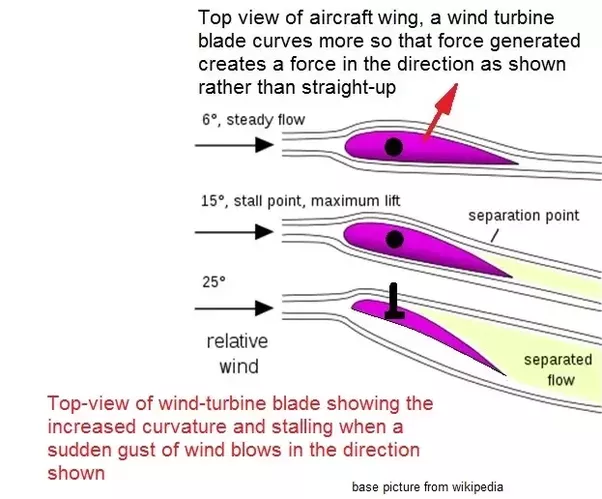 Source, modified by me 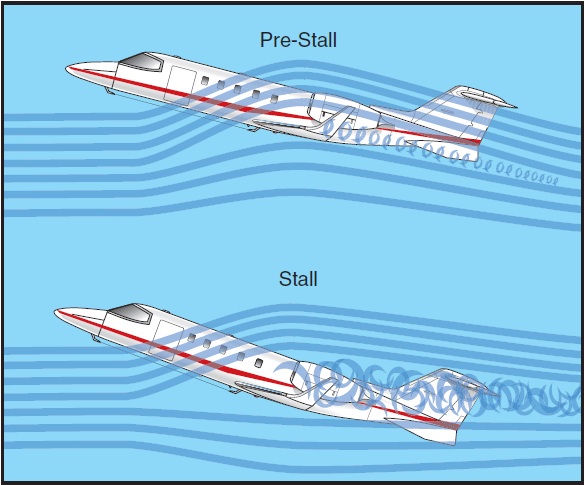 Well the total aerodynamic force DOES indeed increase, but as it is now pointing almost backwards most of it is decomposed as drag, and virtually none of it is left as lift.

By def. the rearwards component of the total aerodynamic force is drag.

Implying that reduced pressure above the wing is generating lift is confusing an effect of a result with the result of an effect. Great theory, not experimentally proveable. NASA tried during boundary layer research on a B-66 airframe in the 1960s. worked well providing BLC but lift? The data said no. Fluid dynamics may have the answers but be forewarned, it will be very complicated.

One does not expect to see an airframe levitate off the ramp by evacuating the mass of air above a wing surface and expect the resultant pressure differential in free air to "push" the airframe vertically upwards into the air, if only it were so. NASA did prove that holes in the wing BLC surface ducting smaller than the dust particles suspended in the ambient air showed a proclivity towards being clogged by said particles thus reducing BLC effectiveness; causing NASA researchers to move on to experiments in blown flaps. That, so far as my researches has taken me over the years, is about as close as "experimental data" has gotten to answering your question.

at stall, the air below a given wing is still at a higher pressure than the air above the wing and seeks the low pressure area by reversing flow above the sharp TE of the wing to "fill" the "void". All the data about lift vectors changing during stall conditions is quite true and proveable. Many theories of how wings generate lift are all seemingly correct. one needs to consider them all and will yet will still conclude that, at least in this universe, Newton is still correct. For every action there is an equal and opposite reaction.

So, stick to the official approved "doctrine" when answering test questions or oral examiners questions in order to pass the required testing. Remain open to new ideas from young minds, that is there job. Newton also commented on laws of inertia that many people hadn't considered, "inertia increases exponentially with the size of the bureaucracy".

There is no more "large area of low pressure above the wing" in the stall. On the opposite, stall is when the "void" on top of the wing sucks in the air from the beneath the wing through the area of less resistance: around rear edge. It releases the pressure between over and under- the wing drops. One should NOT! be thinking about Bernoulli principles when concept is same as explaining the lightning strike: critical imbalance of negative and positive currents (or pressure in our case) leads to a dramatic discharge when opportunity arise.

Seeing is believing: lots of YouTube videos show people attach stripes to the wings and fly them to stall visualising the air currents. I.e.

You'll see how the story happens: in the beginning all is normal and the stripes are aligned with the headwind ok. Then another current starts from the wing rear side and pushing the stripes around. The two currents ARE fighting for the wing. You can see the headwind is loosing the combat as the battleground (see those chaotic stripes) moving forward and all the stripes behind it are turned the opposite way, not because of a tailwind (the aircraft is not flying backwards!),but because we have a lot of air escaping high pressure zone beneath the wing and filling low pressure zone over the wing. And it goes from around the back of the wing. The lift destroyed.
Share
Improve this answer
answered Jul 17 '19 at 18:29

Starting off with a little physics: An airfoil (wing) generates lift due to pressure variations created by the shape of the wing. Bernoulli's equation which models the laminate flow of a fluid (or in this case a gas) though a restriction is: P+(rho*V^2)/2 = n (Pressure + (density x Velocity squared) divided by 2 = some constant. I'll spare you the entire derivation but the end result is the equation for lift which is:

In essence this shows that the faster air is forced over the top of the wing, the lower the air pressure becomes above the wing. Since the air pressure under the wing remains high due to a relatively flat surface, and that nature will look to fill a void, the wing is sucked up into the low pressure (or, if it is easier to wrap your head around the high pressure below the wing pushes it up into the low pressure above the wing (Newtonian view)) thus, we have lift.

(By the way, the Newtonian view and the Bernoulli's view are not mutually exclusive, they are two different approaches that show the same thing... but I digress and that is a whole other ball of wax)

Now, to the meat of your question: As we increase the angle of attack(AOA), lift increases due to a higher coefficient of lift. This would seem to suggest that your initial supposition is correct after all, higher AOA mean greater coefficient of lift but if we look back at our equation we see that the velocity of the airflow over the wing is critical to lift. If we take an idealized look at the airflow as it separates from the wing(Critical Angle of Attack), the air velocity over the wing drops to zero which means we have: Lift = CI((rho*0.0)/2)*A = 0.0, no lift which causes a stall.

As to the second part of your question, why does the drag increase? A fairly straight forward application of Newton's laws tells us what is going on. As the AOA increases and increasing large surface area of the wing is exposed to the relative wind. Combine that with increasing vorticities behind the trailing edge of your wing, creating a low pressure area, and you have increasing drag.

Hope that helps and best of luck in your flying.

58
How do wings generate lift?
12
Could propeller wash provide sufficient lift to take off - even in theory?
12
Is there a standard definition of the “stall” phenomena?

11
Is the stall speed different at -1G?
3
Is flow turning different from the Magnus Effect? If so, how?
10
Why do wall-to-wall airfoils in wind tunnels produce no (or infinitesimal) downwash?
10
Is this paragraph about the dihedral effect in the FAA's Glider Flying Handbook correct?
0
Pressure Distribution Pattern around Wing
2
How does the engine produce aerodynamic lift at high angle of attack?
7
Why do aircraft stall warning systems use angle-of-attack vanes rather than detecting airflow separation directly?
2
Why does the use of reverse thrust in flight on the DC-8 cause areas of separated/reversed airflow over the wing?
5
Is airflow deflected inwards or outwards by wing sweep?
2
Blunt noses subsonic drag - why a complete ellipse?