Do stall strips mean that wing washout is not required? 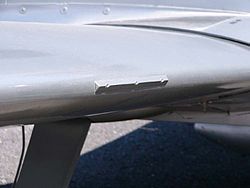 So my question is: can two stall strips placed on each tapered wing (tapered wings love tip stalling) eliminate the need for a washout?

Secondly, what does it mean for a wing to have a washout of 6°? Does it mean the angle of incidence at the root is 6x greater than the tip?

Rectangular wings can get away without washout because that planform tends to have favourable root to tip stall progression as a characteristic of the rectangular shape.

The stall strips aren't really to change the root to tip stall behaviour as a substitute for washout; their job is to generate a local flow separation, just prior to the natural stall, who's turbulent flow can be felt through the airframe and at the elevator while the rest of the wing is still unstalled. That's why they are just short sections in front of the outer parts of the horizontal tail, so that the burble they produce will be felt through the controls well before the rest of the wing lets go.

The Yankee had a NACA 64-416 laminar airfoil which had an abrupt stall and very little natural pre-stall buffet - helped by the strips. Later variants got a revised airfoil with a drooped nose to make the stall itself more gentle, but they still retained the strips to provide the pre-stall buffet.

Many years ago I flew a Yankee that was in a flying club I was in, and it was considered a demanding airplane. The stall strips made it a bit less dangerous than without, but it still took careful speed control when landing. If you got too slow it would start to sink and pulling a bit more pitch had no effect. It had a reputation as a very "hot" airplane for something with only 108 HP.

On a tapered wing, you would be adding stall strips for the same reason as the Yankee's wing, near the root forward of the outer end of the horizontal tail, to provide a distinct pre-stall warning buffet. If your tapered wing had no washout but had the strips, all that would happen is you would get a pre-stall buffet that wouldn't be there without them, but then when you get to the wing's stalling AOA the whole thing goes at once because it's still a tapered wing with no washout.

Some designers get some of the benefit of washout without twisting the wing by varying the airfoil section itself from root to tip.

6 degrees of washout means the angle of incidence is 6 degrees lower at the tip than the wing root, causing the wing root to stall first. Leading edge slats serve the same function, especially in combination with trailing edge flaps near the roots.

Whether these strips would replace washout is debatable, trying to "save" an approach by pulling hard on the elevator is not. The end (literally) result is the inside wing, slower than the outside in the turn, stalls first, the plane then rolls and falls to the ground. Only immediate opposite rudder, along with relaxing the elevator, will help if you catch it in time.

Not the answer you're looking for? Browse other questions tagged aircraft-design aerodynamics wing fluid-dynamics or ask your own question.

3
Would a wingtip stall still be bad if there was no aileron there?
1
How does washout affect the wing incidence required?

26
What is the purpose of the small fins on top of the wing surface of Boeing aircraft?
10
Do airliners stall first at the wing tip?
10
Why do wall-to-wall airfoils in wind tunnels produce no (or infinitesimal) downwash?
1
How does washout affect the wing incidence required?
3
What are the scale effects of GA wing tip airfoils?
2
Does the DC-3 passenger airliner have slats?
2
Why does the effective alpha/CL increase at wingtip of swept wing?
1
Does this web page really correctly depict the angle that is called "incidence" in the French language in the aviation context?
4
Why do tapered wings not stall at the root first?
1
How is washout built into a fibreglass wing?