Where in the FAR or AIM is a high speed taxi defined?

While monitoring coms I recently heard a Cessna Centurion that had just cleared the runway request a "high speed taxi", which was approved by the tower. I'm assuming that means he wants to taxi at a faster than normal rate to his FBO of choice. Are high speed taxis defined somewhere as something you can request of ground control?

There's no definition in the AIM or regulations, as far as I know, but there is one in the P/CG, sort of (emphasis mine):

HIGH SPEED TAXIWAY− A long radius taxiway designed and provided with lighting or marking to define the path of aircraft, traveling at high speed (up to 60 knots), from the runway center to a point on the center of a taxiway. Also referred to as long radius exit or turn-off taxiway. The high speed taxiway is designed to expedite aircraft turning off the runway after landing, thus reducing runway occupancy time

So at least as far as the FAA is concerned, a high-speed taxi may be up to 60kts.

As for requesting it, you can request more or less anything. There's an active EAA chapter at my local airport and pilots who are in the process of building and testing aircraft sometimes request a high-speed taxi on the runway. The controllers don't question it or set any speed restrictions, it's all on the pilot. I suppose if things were busy they might deny the request, but the pilots know to do these things at quiet times anyway.

He was likely asking for approval to use the runway for a simulated take off without actually departing. Usually testing engine performance after modifications.

The FAA does not provide a taxi speed limit but most airlines require observance of SOP "standard operating procedures" as part of their certification process. Normal SOP's are 30kts max with 10kts preferred. The rule I have seen for most flight training schools is "no more than a fast walk".

While not specific to the FAA's FAR or AIM, this FAA video describes the design and requirements of high speed taxies and refers technical specifications to AC 150-5300-13A-chg1. They define a high speed taxi as having no more than 30deg and nor more turn radius than 1500ft.

The exact dimension depends on aircraft category, IFR minimums, whether a reverse turn is needed, etc. No speed requirements are required, they define the accommodation for speed as "higher than normal taxi speed". 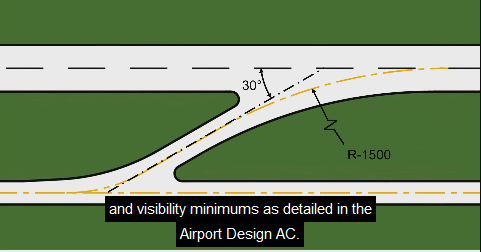 Taking a "High Speed Taxi" refers to using a specific taxiway designed to exit the runway at a high speed after landing. The term does NOT refer to using ANY taxiway at a high speed. Larger busier class D, C, and B airports have these highspeed taxiways.

An example of this is Taxiway Hotel at Van Nuys off of 16R. Thus the pilot you mentioned was requesting "the highspeed" taxiway to exit after landing. Whether he did that at a slow rate or fast rate was up to him. I frequently use the above taxiway at VNY because instead of taking the other taxiways at a 90 degree angle (which requires slowing down to almost a crawl to exit the runway), the highspeed is at a 30 degree angle to the runway which allows aircraft to exit the runway much faster than conventional taxiways. Busier airports want to get planes on and off the runway as fast as safely possible to help the flow of traffic. Highspeed taxiways help this process.

Not the answer you're looking for? Browse other questions tagged faa-regulations taxiing aim or ask your own question.

30
What is the maximum taxi speed and who defines it?

30
What is the maximum taxi speed and who defines it?
7
Where can I find airport taxi instruction "code names"?
2
What is the difference between AIM, AIP and AIS in the US?
9
How far can a passenger plane taxi?
7
Under what authority can the AIM overrule the FARs?
0
Does the AIM really require anti-collision lights to be used during the day?
7
Why does taxiing produce large lateral loads on the 747's engine pylons?
2
Per the AIM, Helicopter pilots may fly non-copter approaches at half the published visibility. Where is that in the FAR?