How to determine the direction of rotation of components inside a gas turbine engine using the blade profile?

I am new to Gas turbine Engines. As of now,I am trying to understand the gas turbine engine DGEN 380 by the manufacturer Price Induction. So I have identified the components such as Intake fan,Planetary gearbox, Centrifugal Compressor,HP and LP turbine. However,I am not sure of identifying the correct direction of rotation for each of these rotating components based on blade profile. So if someone could explain it in a simple way,I shall be thankful. 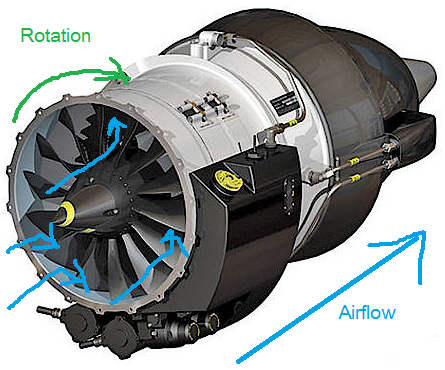 For this particular engine, all other turbomechanical components rotate in the opposite direction as the fan, indicating that the low pressure shaft is connected to the fan using a gearbox that reverses the rotation direction.

This is the low pressure turbine and shaft: 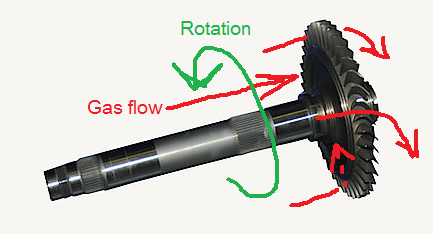 1
How does the fan in the jet engine suck in air while the engine is stationary?

3
How do propeller-driven, fixed-wing UAVs counter negative torque from engine rotation?
4
How does the rotor blade material affect aircraft performance?
6
What is the transient bleed valve in a gas turbine engine?
2
How to determine the thickness of an airfoil?
2
What is the most effective of propeller's rotation in a two-propeller engine airplane?
2
Is any convention to tell the propeller rotation direction of an airplane?
6
How do aircraft manufacturers determine the elevator size?