Is the size of hail on the ground any indication of the winds and updrafts of a thunderstorm?

Is there any rule of thumb or way to estimate the wind speeds or up and down drafts inside a storm by the size of hail that reaches the ground? 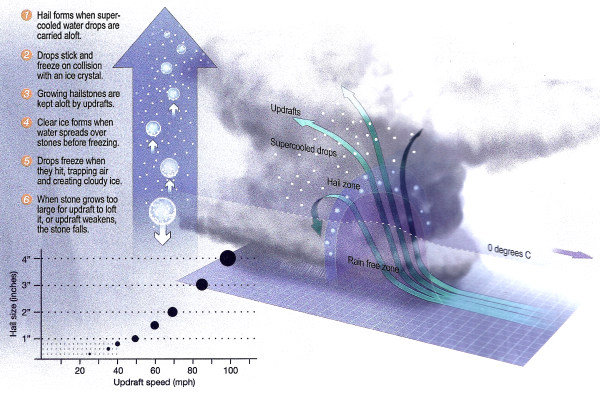 Certainly. There are two effects involved here which I will describe briefly as follows:

first of all, a small spherical object will exhibit a well-defined terminal velocity when free-falling in air. This means for a hailstone to have formed at a given diameter, the updraft velocity would necessarily had to have been close to the terminal velocity for an object of that size, for it to have stayed in the storm cloud and grown to that diameter.

Second, if you section a large hailstone you will find that it is layered, like an onion. this means that hailstone contains evidence of not just one freezing event but instead as many as there are layers in its structure.

In each case, then, the velocity of the updraft it experienced at each individual stage of its growth had to be significantly greater than its terminal velocity at that stage in order for it to have been lofted back into the storm cloud where it then got another ice coating before it began falling again.

Not the answer you're looking for? Browse other questions tagged weather meteorology extreme-weather or ask your own question.

8
Is there any way to determine or estimate where the cloud tops are?
7
What in-flight weather info is available to commercial pilots?
17
How does radar detect turbulence and wind speed?
8
How does an organization decide to evacuate planes (e.g. in a hurricane)?
8
Are winds that are not from the prevailing wind direction more often gusty, and why?
1
What is the best way to navigate a storm?
10
What would the altimeter indication be through a cold front?
12
Who makes the call to start in terrible weather conditions?
9
Can the “G” and “VRB” wind conditions be combined in METARs?