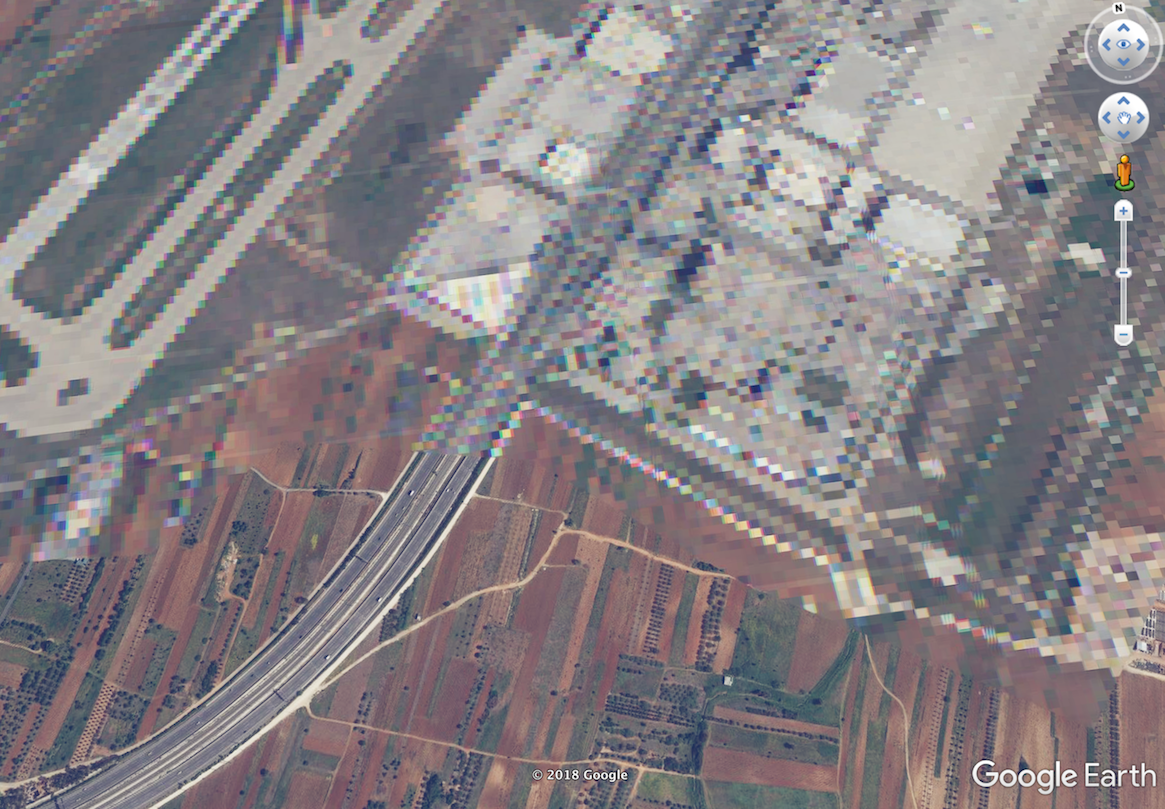 The short answer seems to be that some countries have persuaded Google to blur out specific areas for "national security" reasons. Wikipedia has an article on it with some more (limited!) information. Interestingly, I couldn't find any official Google article on blurring in Maps, apart from some general references to Street View. And, as it turns out, Street View at ATH works as normal.

FWIW, it seems that Greece didn't persuade Microsoft to play along, because Bing Maps has much better images. That strongly suggests that the blurring is mostly security theater.

(By the way, I'm not saying that there are no security/privacy risks with Google Maps, Bing or other tools; it's just that some risks are more credible than others. security.SE would be a good place to ask more about that.)

In Greece, many domestic airports are (or were) either officially military airports, or they have an air force base attached which uses the airport.

Most other countries have entirely separate military bases. With Greek geography being so fragmented by mountains and islands though, and with such a shortage of flat land where runways can be built, it simply isn't practical for every island and every major area of habitation to have separate air force bases and civilian airports. Combining the two makes absolute sense; but it does have the knock-on effect of requiring precautions to be taken for the civilian airport which would normally only apply to a military establishment.

Most Western countries wouldn't consider this level of military infrastructure to be necessary. After the Turkish invasion of Cyprus in 1974 though, Greece is very aware of the vulnerability of its territory and the need to be able to rapidly deploy troops to defend that territory. This is a major factor in Greece still requiring its young people to carry out national service. The military are regularly visible in a way which might be normal for people in Northern Ireland or Israel, but not for people in much of the rest of the world.

Ironically, the fact that the area is pixellated is a huge red flag to 'there's something interesting here'!

I was once getting a flight home from a small airport on the Greek mainland. We boarded the plane but take off was delayed for a long time. The pilot got on the intercom and apologised for the delay which was 'due to congestion in the Athens airspace'. We then saw a Nato AWACS take off from the runway we were waiting to use. Shortly after that two very smartly-dressed Greek Air Force officers walked out of the flight deck, got in a car and drove away.

Short answer: many Greek civilian airports have a military role as well.

244
What is the dark spot visible below the cockpit on A-10s?

9
Is there a website which highlights airport locations on a map?
8
Where is the airport in Disneyland Paris? (DLP)
14
Why are airports like Roswell and Fresno so popular for flight tests?
12
Why five touchdown zone markings for only one aiming point?
14
Are there any "captains-only" airports in the U.S.?
3
Why are some non-towered airports charted with an empty circle?
2
What is this aircraft on the grass in Budapest International Airport?
31
What is this second smaller runway next to London City Airport?