Why does enriching the mixture ratio beyond stoichiometry give more power?

In other words, in a piston engine, the best-power mixture is richer than that producing the EGT peak that signals stoichiometric combustion.

Why is that, physically? 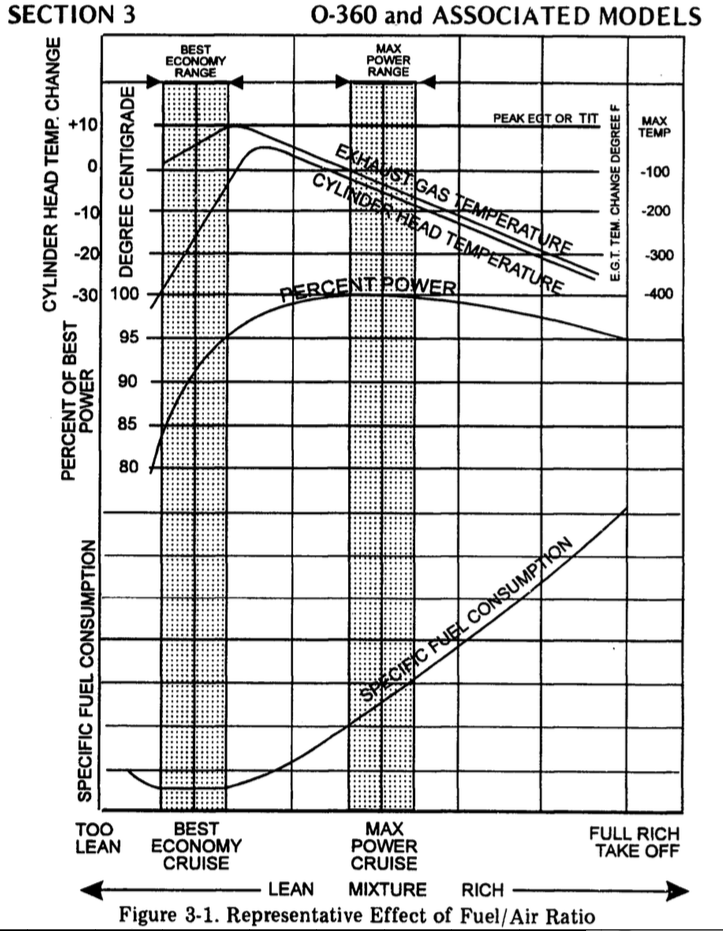 It's because, although the Best Power mixture dumps more fuel than can be consumed by the available oxygen, the extra fuel increases the combustion speed in the charge, increasing the buildup up of pressure in the combustion chamber, and this increases the total potential energy in the air/fuel charge that can be converted to work, even though not all of fuel is burned. You could say that the excess fuel has kind of a catalytic effect, or maybe a turbocharging effect... sort of... up to a point.

Beyond a certain point, adding more excess fuel becomes counterproductive, so Best Power mixture is the sweet spot where the speed of combustion and pressures generated are maximized and the cylinder makes the most horsepower it can make (the highest possible combustion pressure) with the available displacement and airflow.

In addition, there is an effect that I know about from motorcycle engines which is probably true of airplane engines and that is the "quality" of combustion as a function of richness: If you run rich, preignition and lean misfire (both of which reduce combustion efficiency) are prevented, and the delivered power is smoother. You can hear this: a motorcycle engine sounds "happier" when running rich than it does running lean- and it pulls harder, even though the mix is nonstochiometric.

This is simply due to the difference between theory and practice. It turns out that even in a well-balanced charge of fuel and air, there are highly localized “pockets” of varying mixtures at the local, molecular level. By “local level” you should think of a bunch of little fuel molecules huddling together over here and over there in different places inside the cylinder as the piston is rising up towards top dead center and starting down. Some of these “pockets” may be so lean, or so rich, that they won’t burn at all. Some may be in the combustible range, but not really contribute to the combustion event, and some may be perfectly mixed, ready to go, so to speak.

In theory, the ideal mixture for our engines is about 15 parts air and 1 part fuel (by weight), which should result in no oxygen and no unburned fuel molecules going out the exhaust pipe - IF it was a truly homogenous mixture, but, it’s not. It’s actually highly dynamic, varying greatly from cycle to cycle. Each combustion event is comprised of those little pockets of varying fuel-air mixtures I just described, different every time. At a stoichiometric mixture, after the spark occurs and the flame front propagates, some of the oxygen molecules just do not “find” fuel molecules quickly enough to burn, and they remain unused or unburned at the ideal ratio. By supplying just a bit more fuel, there is a greater opportunity for the lonely oxygen molecules to react with the hydrocarbons, meaning more total fuel is burned, a bit more heat is generated, and less oxygen escapes out the exhaust pipe without having had a chance to mate.

This is why we’ve long observed that a slightly richer mixture would produce slightly more power.

Peak EGT does not mean max power for a simple reason: you have extra heat that was not used mechanically.[1] It wasn't used because the rate of energy release was not fast enough for complete combustion before the exhaust valve opened, but sufficient to affect the EGT sensor downstream.

When more fuel is added up to a level, more oxygen is burned, releasing more energy at a higher rate, and power increases.

Not the answer you're looking for? Browse other questions tagged piston-engine mixture or ask your own question.

21
How does the mixture of an engine affect the engine's operation?
26
Why should some piston engines not be run lean of peak?
3
What is the relationship between fuel mixture and RPM in a reciprocating engine?
4
Can leaning provide more power when running at full throttle?
1
How to lean with constant speed prop on multi-engine aircraft without EGT
6
Why does pulling the mixture to idle cutoff increase the RPM slightly?
2
Does a lean mixture result in a higher cylinder temperature for a given power setting?
3
What is the relationship between fuel mixture, throttle setting and engine temperature?
2
On the G1000 lean assist page, what does a positive delta EGT mean?