What is the pivot point of pitch change on an aircraft?

I was wondering if there is a way to determine the pivot point when an aircraft changes pitch, assuming a standard slightly nose heavy and back elevator trimmed Cessna 172. Will it pivot around the CG, the Center of lift, or somewhere in between.

Logically, I would think it would be "from where it is held up", but some writers stress CG.

By the very definition, a free-flying object can only pivot around its CG.

Using anything else as a pivot (e.g. Aerodynamic Center) involves a combination of momentum and translation (linear movement) of the CG and will quickly get you into mathematical problems once you start combining the forces acting on the object. Make no mistake, an object only rotates around its CG.

If this is just a mental visualisation exercise, you can 'imagine' the pivot point to be at the center of pressure (i.e. the famous plane suspended by strings at the wings), and as the plane is already flying at a few hundred knots in +x, the little +y acceleration error will not make much of a difference as a mental exercise, but the error is there mathematically.

Later edit:if you still have problems visualising it, place your aircraft in outerspace where there is no air or gravity.Put some big thrusters on the wing and smaller thrusters on the tail. CG (center of mass) is very much forward of the wing. Now fire the thrusters.

It depends on your frame of reference

You have not specified a frame of reference, so I will look at the two most common choices.

This is the frame that moves with the aircraft. By definition, any rotation happens w.r.t. the origin point of such frame. By standard practice, the origin is the center of gravity (the equations are much simpler). Thus in this case Radu094's answer applies.

In this frame, not only you are pitching, but you are also moving forward (in the case of fixed wing aircraft; if you are in a hovering helicopter, then it is still the Center of Gravity).

This forward motion completely changes the position of the "pivot point", that will end up being outside the aircraft.

Assuming a vertical load $n$, and a forward velocity $V$, your aircraft will pull up around a point placed $R$ meters above the aircraft when the aircraft started pulling up: 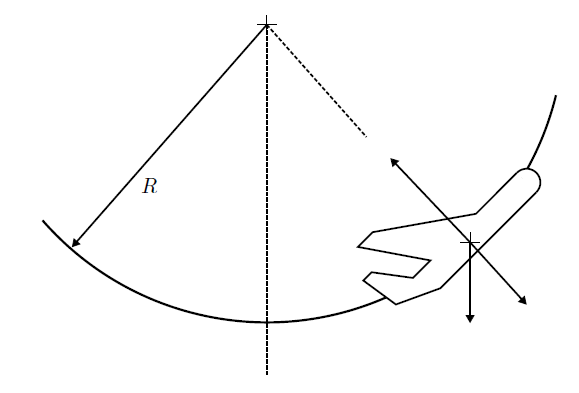 The pivot point is whatever you choose! However, choosing the centre of gravity makes any analysis simplest.

However, for dynamic analysis, that is understanding the relation between the forces acting on the body and its movement, using centre of mass (a.k.a. centre of gravity) is the only reasonable option. That is because both the Newton's Second Law of Motion,

and its rotational version,

($a$ is acceleration, $F$ is force, $m$ is mass, $\alpha$ is angular acceleration, $\tau$ is torque and $I$ is moment of inertia), only work in these simple forms for the centre of mass (you can verify that by doing the integration over the mass of the body).

Alternatively in some cases you might want to chose the pivot point so that it is not accelerating, but depending on the path taken, that may not be possible. For example when the pilot pulls on the control column, an downward force will be generated at the tail. Its moment will cause upward angular acceleration in pitch, but it is still an unbalanced force, so it will cause a downward acceleration of the centre of gravity first. This combination means a non-accelerating pivot lies somewhere far ahead of the plane.

But as the attitude and path change, the angle of attack will increase and the wings will build up an upward force that eventually balances, and exceeds, the downward force at the tail and the plane will accelerate upward. At which point, a non-accelerating pivot lies somewhere far above the plane (see the diagram in Frederico's answer). So in case of an airplane, looking for a non-accelerated pivot is futile. It rarely works in situations other than where the pivot actually has a solid support, so it can't accelerate.

0
Again, where is the pivot point in pitch

6
What is the direction of the sideslip induced by roll on a conventional aircraft?
6
How can an aircraft turn if the horizontal force component is zero?
6
Why are yaw rate and pitch rate obtained by these equations?
4
What is the difference between Body Pitch Rate and Inertial Pitch Rate?
3
Does propwash increase pitch stability?
2
For an aircraft, what are the differences between nonlinear and linear equations of motion?
1
Why did the Wright brothers take steps to increase the amount of vertical surface area forward of the CG on some of their aircraft?