Why are helicopters less efficient than planes?

At higher speeds, advancing helicopter blades will operate at velocities approaching mach 1, reducing efficiency. But what about lower speeds?

A helicopter is basically a wingless plane with a giant propeller. Why is it more efficient to move around using propellers to provide forward trust while using separate fixed wings to provide lift?

The answer lies in the difference between energy and momentum. Both have to be maintained, but energy goes up as the square of velocity, while momentum goes up linearly. To impart a given momentum, you can either move a lot of air slowly, or a little air quickly -- but as you move the air more quickly, it requires disproportionately more energy.

In other words, the bigger the wing, the more efficient (from an energy/momentum perspective, anyway).

A rotor's size is limited, both because its fast rotation means it needs to be light (and thus can't be very reinforced, etc) and because the larger its radius, the faster the end spins. That means it has to touch less air, but move it more -- which requires more energy.

There's more detail at this question on Physics StackExchange (disclaimer: I wrote that question).

A helicopter is not exactly wingless - the rotor is the helicopter's wings.

The amount of fuel required to travel distance $S$ is then $SFOC\cdot S/V_{aircraft}\cdot V_{wing}\cdot W\cdot(L/D)$, where $V_{aircraft}$ is the aircraft's ground speed, where $SFOC$ is specific fuel consumption.
For a fixed wing, $V_{wing}$ and $V_{aircraft}$, ignoring wind, are the same. In a rotary wing (helicopter), $V_{wing}$ is higher than $V_{aircraft}$ - the wing travels a longer path through the air, with rotation.

For this reason, a helicopter will always be less efficient than a fixed wing aircraft with the same lift/drag ratio. If the ratio is 3x, that's 3 times more fuel for the same distance. This is of course a vast simplification, ignoring all the details and just describing the principle.

To put it in even simpler terms, a helicopter is like a plane with its wings flying a path full of loops.

As pointed out in this answer: 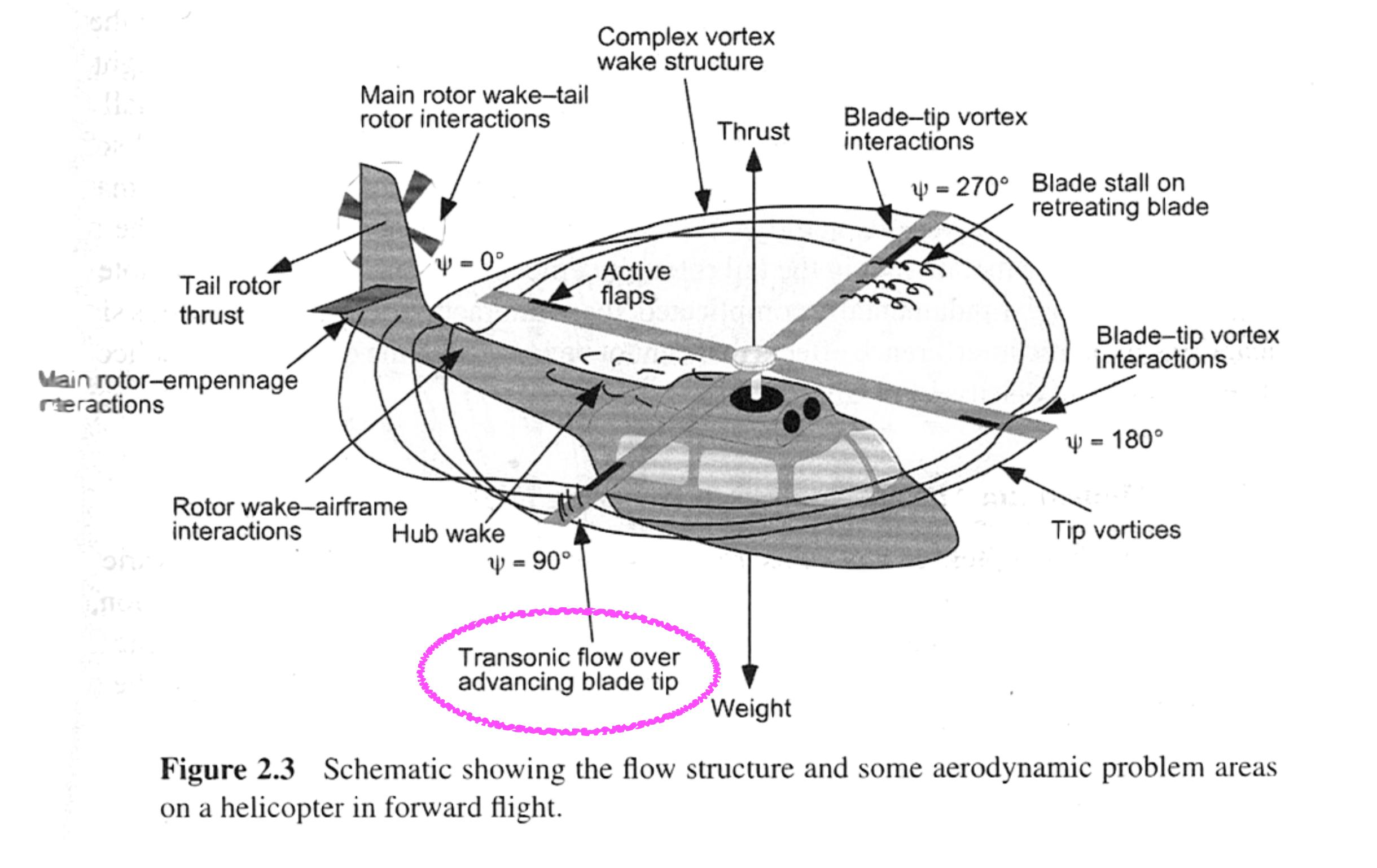 The picture from J. Gordon Leishman, Principles of Helicopter Aerodynamics, illustrates the complexity of the multitude of aerodynamic drags that can be found in a helicopter, and that decrease efficiency.

Not the answer you're looking for? Browse other questions tagged helicopter propeller efficiency or ask your own question.

7
Is a fixed wing more efficient in reaching a certain altitude than rotary wing?

47
Why is the Tu-95 so efficient despite having propellers that spin faster than the speed of sound?
6
Guidelines for using a constant speed/adjustable pitch propeller
2
Is the purpose of variable pitch propellers to maintain an optimal angle of attack?
4
On a constant speed propeller, how is blade pitch related to airspeed and efficiency?
3
Do ducted fans have a future in forward flight aircraft? Can they be made more efficient than open rotors?
16
Can the plane Celera 500L be eight times more fuel efficient than a jet of similar size and capacity?
2
Is high propeller pitch inherently inefficient?
9
If an elliptically-shaped aerofoil gives the optimum lift distribution, why aren't propeller blades designed around this ideal?
9
What is the function of the aft stator in CFM's open rotor engine design?