Could compressor stalls be caused by air in supercritical conditions?

The answer to your question:

Stall is caused by an excessive angle of attack of the incoming air, relative to the blade. It can happen on the first stage (first row of rotating blades), where the pressure is no where near high enough to be supercritical. Surge occurs when the stall is very severe, so it’s the same phenomenon, just worse.

While the likelihood of a stall occurring is determined by measuring the total pressure distortion across the compressor face, it is the angle of attack that is the critical factor. Regions of low total pressure indicate the flow is likely to be turbulent in these regions, and therefore the angle of attack is not steady, and can exceed the ability of the air to follow the surface of the blade. Once it separates, it becomes turbulent, which means the blade does not perform its function of compressing it well. This is a big problem, as the compressor is trying to get the air to flow “uphill”. Stall generally starts as a phenomenon involving a few blades on one or more stages. It can then develop and cover a large section of the compressor. If the axial velocity of the flow through the compressor starts to vary, faster and slower, then faster again, it is called surge. The engine “chugs”. 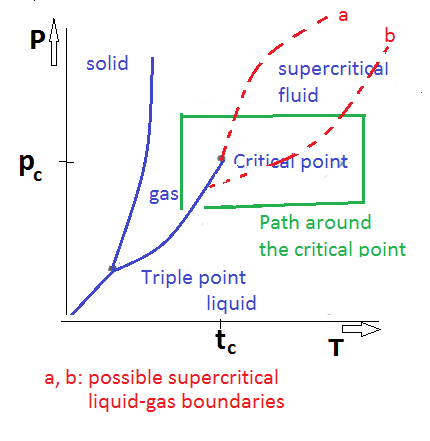 Supercritical liquid–gas boundaries are lines in the p–T diagram that delimit more liquid-like and more gas-like states of a supercritical fluid.

Due to the high temperature of the gas in a jet engine, it will behave like a gas, and never liquid-like. The only way to have the gases behave liquid-like and cause compression issues, is by cooling the gas close to its critical point, which is very cold for a jet engine.

Not the answer you're looking for? Browse other questions tagged jet-engine engine-failure compressor fluid-mechanics or ask your own question.

5
Is the air in a jet engine supercritical?

2
How does induction ice form in and affect jet engines?
2
What is qualitative relationship between surge line, stage characteristic and throttle characteristic?
2
Is there an alternative (more robust) operating law/setting for jet-engines? After one engine failed?
8
Why were rotary vane compressors never used in jet engines?
5
Is the air in a jet engine supercritical?
6
What exactly is an “engine surge” in a jet engine, and what causes it?
3
Why are liquid ring compressors not used in a jet engine?
0
Do the compressors and turbine rotate at the same speed?
0
Why are inlet vanes used instead of variable geometry inlets to prevent compressor surge/stall?