Is rotation speed and lift-off speed ever used interchangeably? (AMENDED Question) Is lift off speed and fly off speed the same? (See supplemental info below)

I thought I clearly understood the difference between these two terms:

However, I was reading something the other day where the two terms appeared to be used interchangeably, which I accepted at first, but now its bothering me. It was a POH and it said that for normal take-off rotate at 70-75 KIAS. However, the POH also says that the "Normal takeoff distance in Section 5 is based on lift off at 65 KIAS."

Found it, here is the text: 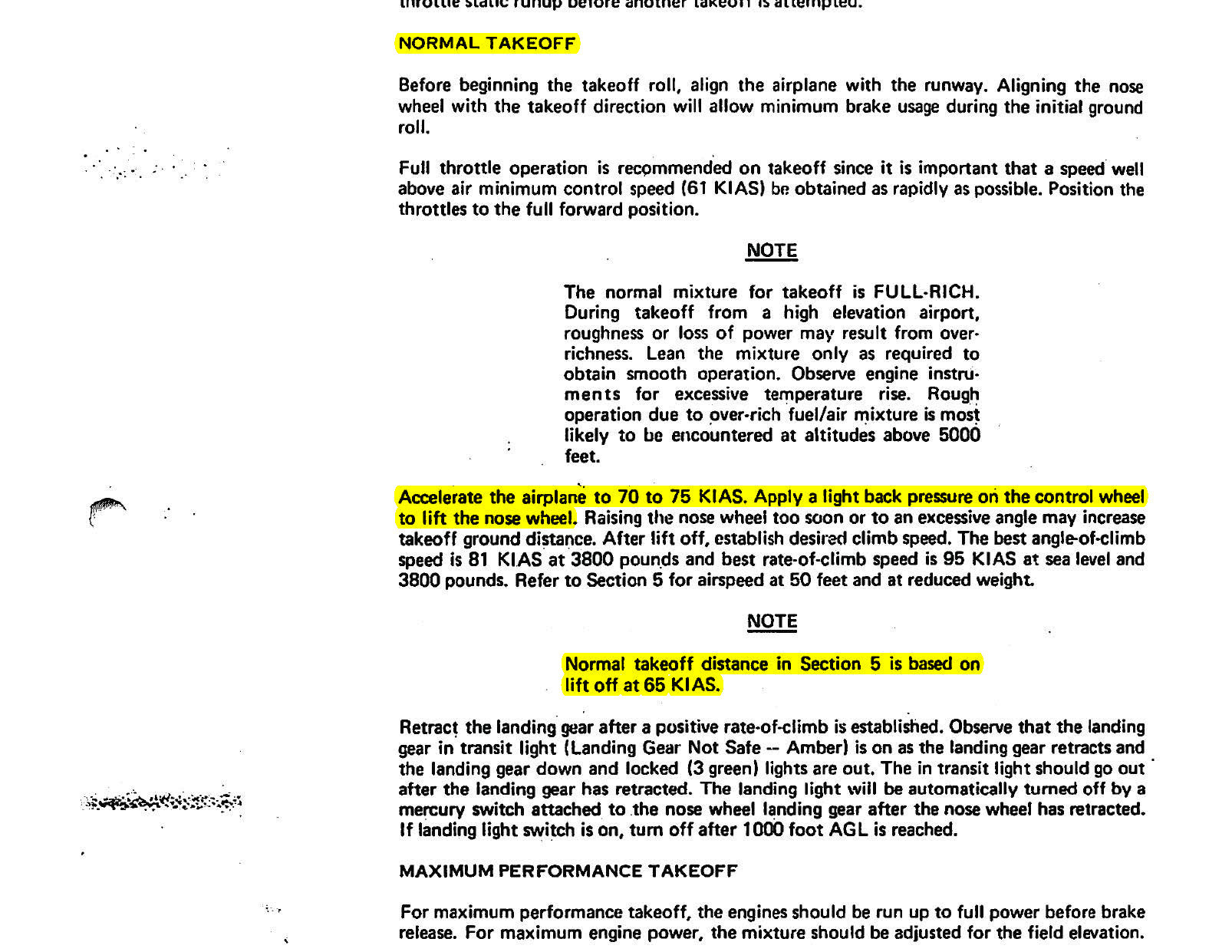 By the way, after further reading of the POH, I don't think the "lift off at 65 KIAS" is a typo. See the maximum performance takeoff which says to rotate ASAP and "fly off" at 61 KIAS the single engine stall speed of the aircraft. (See Copy Below).

I think they were just hard-core back then. So this raises another terminology question "fly off" speed. So we have rotation speed, lift off speed, and fly off speed. My interpretation is that for max performance takeoff rotate ASAP, if airplane flies below 61 KIAS, then keep it in ground effect until 61 KIAS, then fly off. 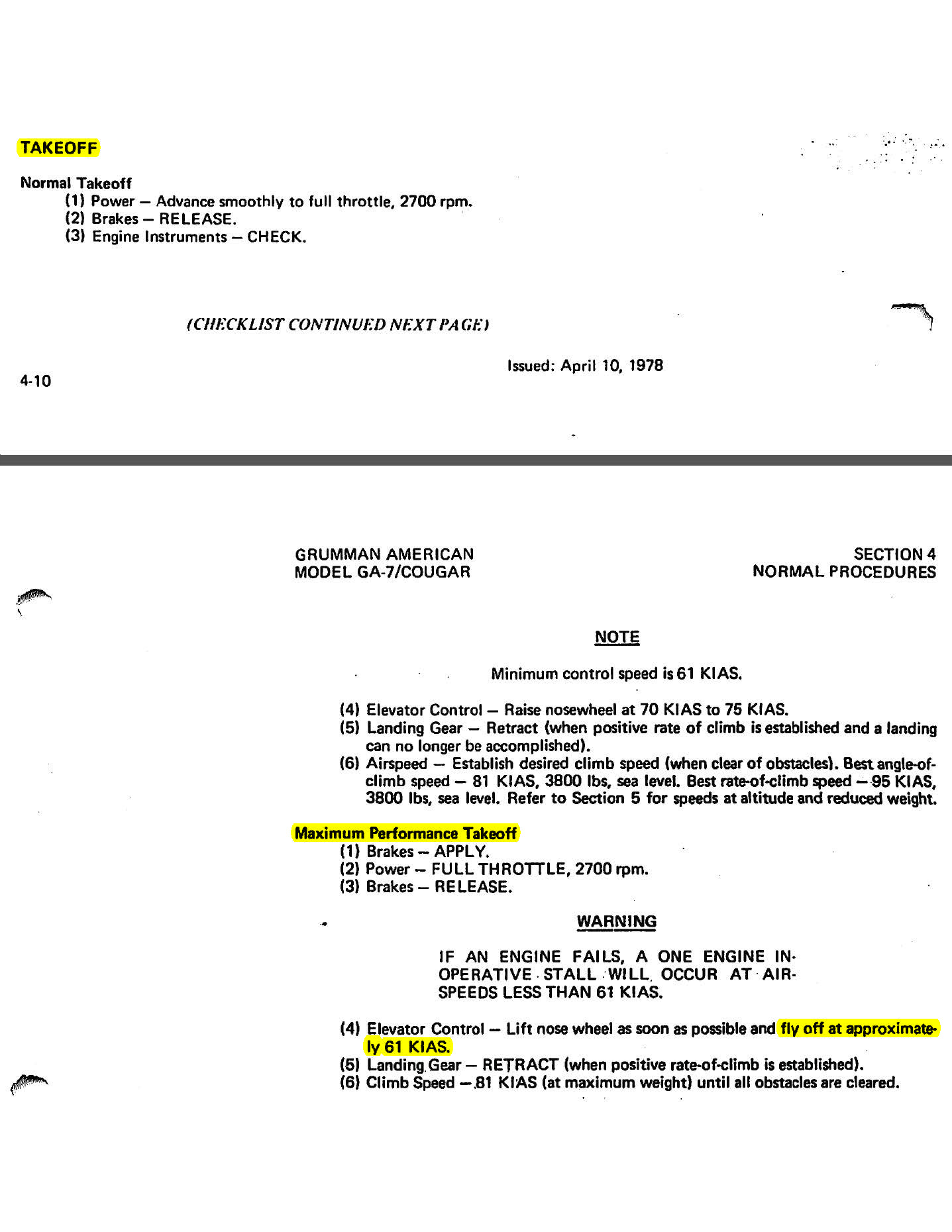 Your original understanding is correct. Rotation speed and liftoff speed are two different things, the former being the speed you are to make an input, and the latter the speed at which you get a result (weight off wheels).

That's almost certainly a typo and is supposed to say 75kts (my guess), which would be the demonstrated maximum distance to weight-off-wheels with rotation initiated late in the 70-75 kt range. Manuals published as integrated handbooks like that tend to never get revised unless a new edition is published, and the Cougar was only in production for a couple of years making a little over 100 aircraft, so I'd be surprised if there is a newer edition than the 1978 one, especially if it involved publishing a new handbook over a minor typo on an out of production airplane.

On a light aircraft the input and result are just about instantaneous and a rotation initiated at 75kt will result in a liftoff pretty much at 75kt or maybe a knot or two higher. On high performance aircraft rotation speed and actual liftoff may be 1 or 2 seconds apart and it's more obvious that they are different things.

I believe that your interpretation of rotation and lift-off is correct. The POH is basically saying that minimum control speed is 61 knots, minimum lift-off speed is 65 knots, and recommended rotation speed is between 70-75 knots. The POH is saying that the performance charts in section 5 are based off of lift-off speed of 65 knots rather than the recommended 70-75 knot lift off speed. It is usually a good idea to rotate at an airspeed higher than the minimum lift-off speed. That is why the POH is recommending the higher rotation speeds. Remember that you will need some extra airspeed to break out of ground effect. Also to avoid vertical obstacles at the end of the runway accelerate to Vx which is listed as 81 knots in the POH.

Also for pilots like myself who take off at airports with gusty wind conditions it is a good idea to build up extra airspeed before rotation so that the plane won't sink back to the runway if the wind suddenly stopped or changed direction.

I usually rotate at Vx everytime. While doing this uses a little more runway I do have better climb out and control authority on lift-off. Since my airport has 7000 foot runways I still have plenty of runway if something goes wrong and I have to land straight ahead.

This FAA document, part of a larger document, the Airplane Flying Handbook, discusses rotating and liftoff on page 5-5 https://www.faa.gov/regulations_policies/handbooks_manuals/aviation/airplane_handbook/media/07_afh_ch5.pdf

When all the flight controls become effective during the takeoff roll in a nose-wheel type airplane, the pilot should gradually apply back-elevator pressure to raise the nosewheel slightly off the runway, thus establishing the takeoff or lift-off attitude. This is the “rotation” for lift off and climb.

As the airplane lifts off the surface, the pitch attitude to hold the climb airspeed should be held with elevator control and trimmed to maintain that pitch attitude without excessive control pressures. The wings should be leveled after lift-off and the rudder used to ensure coordinated flight.

So one could say you rotate the plane at one speed to bring the nose up, and then some finite speed later the airplane will lift off. A properly trimmed airplane will often just lift off the runway with no elevator input needed. Such a plane will sit on its gear in the liftoff attitude.

Not the answer you're looking for? Browse other questions tagged takeoff terminology v-speeds or ask your own question.

17
When to reduce power on takeoff (Cessna 182 or similar)?
17
In a 747 is it normal for the Vr (takeoff speed) to vary greatly depending on fuel load and ambient temperature?
5
What's the difference between Rotation speed vs takeoff speed?
7
What performance issues/symptoms can a pilot expect while taking off above MTOW?
18
Why is the takeoff decision point based only on speed and not time or distance?
6
Under which conditions is full rated power instead of METO power required for takeoff (DC-3/C-47 with Pratt&Whitney 1830 twin wasp engines)?
1
Why should a Piper Seneca not take off after an engine failure below 100MPH?
5
Does a “take-off” assist make sense for electric aircraft?
13
In light aircraft, non-instrument flight, apply (nearly) full aft elevator before beginning the takeoff roll or at some predetermined speed?